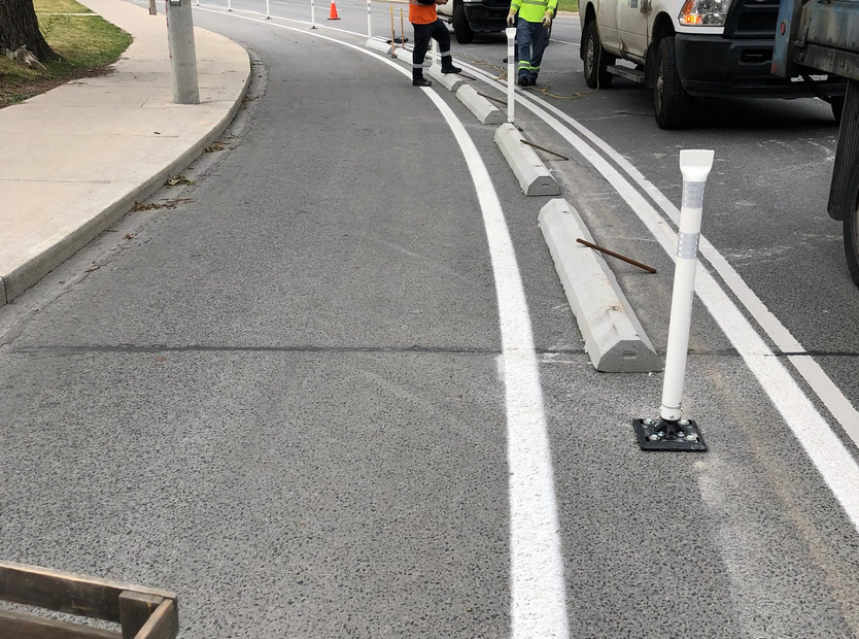 TORONTO, ON., June 25, 2020 — Mayor John Tory has announced that two major downtown ActiveTO cycling network connections, on parts of University Avenue/Queen’s Park Crescent and Bloor Street, will be installed before the weekend, shortly after Toronto enters Stage 2 of the Province of Ontario’s reopening plan.

“Cities around the world, including Toronto, are expanding cycling infrastructure to make it easier and safer for people bike as we move into the recovery and re-start phase,” said Councillor Joe Cressy (Ward 10, Spadina-Fort York). “The separated bike lane on University Avenue helps frontline workers in hospitals, medical clinics, and doctor’s offices get to work safely. It also means that people who live in our community now have an accessible alternative to public transit, which will open up more space for physical distancing on our subways, streetcars, and busses,” said Cressy.

Additionally, planning is well underway for cycling routes along Brimley Road, between Lawrence Avenue and Kingston Road, Huntingwood Drive, between Victoria Park Avenue and Brimley Road, Wilmington Avenue-Faywood Boulevard, between Finch Avenue and Sheppard Avenue, and Bayview Avenue between River Street and Rosedale Valley Road. It is expected that the new bike lanes on Brimley Road will be installed next week.

The ActiveTO cycling network plan is the largest expansion of Toronto’s on-street bike network ever in one year. It includes approximately 25 kilometres of temporary, new bikeways along with the acceleration of 15 kilometres of cycling routes previously planned for this year, for a total of approximately 40 kilometres of new on-street cycling lanes in 2020 to be installed. Through ActiveTO, the cycling network is being expanded quickly through temporary installations by repurposing curb lanes along several key corridors.

The following ActiveTO major road closures will be in place this weekend, from Saturday, June 27 at 6 a.m. to Sunday, June 28 at 11 p.m. include:

Parking lots at Sunnyside Park, Sir Casimir Gzowski Park and Budapest Park will be closed all weekend during ActiveTO closures. Overnight parking is not permitted in these lots and any vehicles should be moved before midnight on Friday night.

The popular ActiveTO major road closures are installed adjacent to City trails to make space for people, alleviate weekend crowding, and ensure there is room to be physically active and support physical distancing.

Vehicle access on these sections of major roads will not be permitted to allow for walking, running and cycling. These closures will continue on a trial basis and will be adjusted as required. The City actively manages traffic during these closures through signal timing adjustments on adjacent routes and roadway signage to alert drivers. Motorists who normally travel these roads on weekends should plan alternate routes. Those expecting to use the major road closures to walk, run or cycle should access them as a pedestrian or by bike, since nearby parking is limited and site parking is not provided.

Toronto has a robust trail and cycling network, near and around neighbourhoods throughout the city, that residents are encouraged to use every day to be physically active while respecting physical distancing.

A cycling network map, including multi-use trails, is available at https://www.toronto.ca/services-payments/streets-parking-transportation/cycling-in-toronto/cycling-google-map/.

Walking and hiking trails are available at https://www.toronto.ca/explore-enjoy/recreation/walking-hiking/trails/.

All planned and approved Quiet Streets locations are now in place, totalling more than 60 kilometres along neighbourhood routes across Toronto. Staff continue to actively monitor and adapt all locations, based on neighbourhood use, and have been returning to locations to address on-street issues as they arise. An online feedback survey is also being planned for those who are using Quiet Streets.

Quiet Streets are shared space to allow residents to maintain physical distancing, while getting around on neighbourhood streets. Signage and temporary barricades are placed at intersections to encourage slow, local vehicle access only so the roadway can be a shared space that welcomes people who walk, run or bike as an alternative to riding transit. Parking and drop off areas are not impacted and City services, such as waste collection and emergency access, continue as normal. Quiet Street locations have been prioritized based on several factors including population density, equity and access, access to greenspace, nearby attractions, traffic volumes and other considerations.

More information on ActiveTO, including an online map of all locations, is available at http://www.toronto.ca/activeTO.

Find more Toronto and Montreal stories at totimes.ca and mtltimes.ca