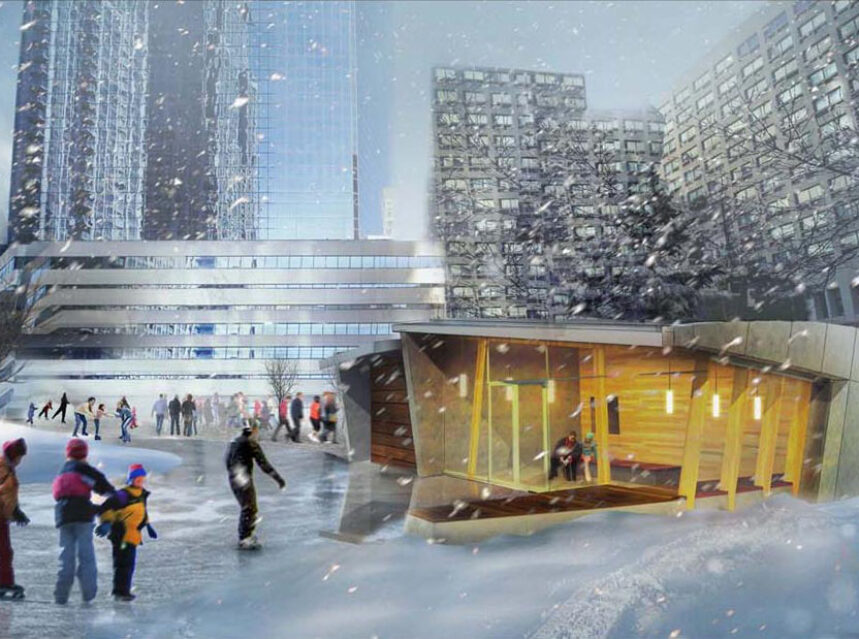 The City of Toronto along with local dignitaries officially declared its newest state-of-the-art skating trail open on Saturday, December 7, 2019.

The Barbara Ann Scott Ice Trail is named after the only Canadian to win the Olympic women’s figure skating gold medal, who also received the Lou Marsh Trophy three times as Canadian athlete of the year.

The five-metre-wide trail, designed to be a walking loop in summer, is the first exterior skating path in North America to incorporate state-of-the-art carbon dioxide technology in its refrigeration system. This environmentally friendly technology is natural, non-toxic and non-flammable, with no net greenhouse gas effect.

“This ice-skating trail turns College Park into a destination that can be enjoyed throughout the year. Families can come out and experience this skating trail that takes an environmentally-friendly approach to a winter activity that is cherished by so many,” said Toronto Mayor John Tory.

Adjacent to the trail, an architectural construction of wood, glass and stainless steel has been designed as the new rink house/warming station/Zamboni station. Additional park features include a water fountain and large frog sculptures.

“The College Park opening has demonstrated the value of common vision and collaboration between the City, the BIA, our membership and the community, bringing a much needed asset to life for this neighbourhood,” said Mark Garner. CEO and executive director of the Downtown Yonge BIA.

“College Park is now an exciting location for all through all seasons due to the exceptional partnership between the City, the Downtown Yonge BIA and many others,”  commented Toronto City Councillor Mike Layton.