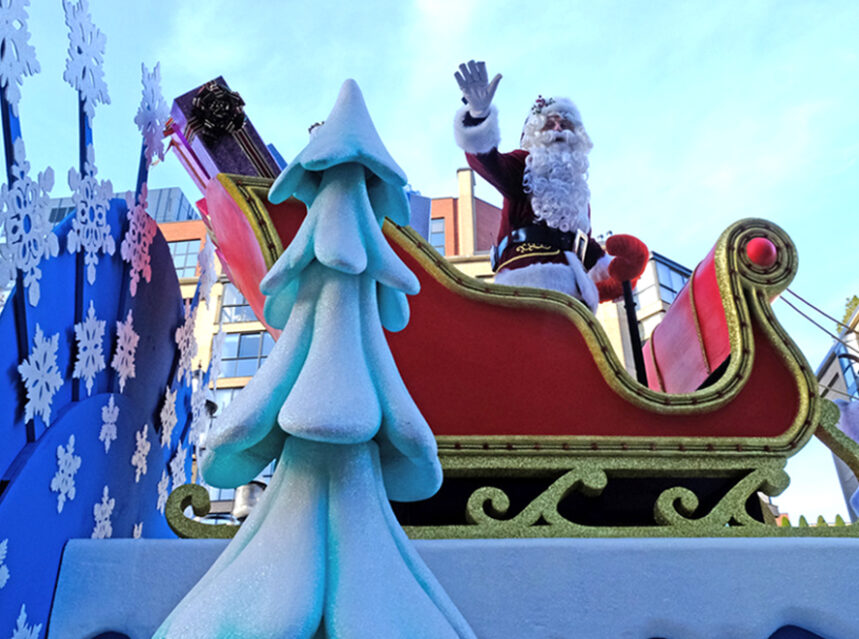 The 116th edition of the Toronto Santa Claus Parade will take place without the magic of excited crowds for the first time ever but this doesn’t mean it won’t be extra magical. Despite the ongoing pandemic, Toronto is making sure Santa Claus is still coming to town. This year Canada’s largest annual parade will be two-hour televised special on December 5, 2020.

Hosted by Melissa Grelo (The Social) and Kelsey McEwen (Your Morning), and produced by Bell Media Studios the Toronto Santa Claus Parade will be airing exclusively on CTV and CTV 2. But don’t expect to turn on your TV and watch the usual parade in the middle of the day, as the two-hour TV special, filmed ahead of time, premieres Saturday, Dec. 5 at 7 p.m. ET/PT,

Held since 1904, ‘The Original Santa Claus Parade’ will feature several exciting firsts. One of the changes will be the addition of celebrity guest performances. The star-studded lineup includes: Dolly Parton, Kelly Clarkson and Brett Eldredge, Meghan Trainor, Ruth B., Shaggy ft. CARYS, and the Toronto Symphony Orchestra and many more.

Also, normally held on the streets of Toronto, this year’s event will have an extra magical angle to it, as for the first time ever, the venue is shifting away from downtown to Canada’s Wonderland amusement park.

Another obvious first, will be the evening time slot, allowing for the inclusion of 25 or more, spectacular illuminated floats. It will also be the first time the Toronto Santa Claus Parade route will be closed to in-person onlookers. Having the route closed and contained at the amusement park will make it easier for organisers and participants to adhere to provincial COVID-19 health and safety protocols.

The parade also features celebrity clowns and a “Clowning Around at Home Program” where viewers can purchase a clown kit (including clown makeup, a wig, gloves, and a red nose) to get into the parade spirit. Viewers can visit the parade website to find out more and they can send a video of themselves clowning around from home, which could be featured during the TV special.

Ontarians can also get ready for Santa’s arrival by purchasing a Rudolph red nose to wear during the TV special. The noses are available for purchase from any Altima Dental office in GTA/Southwestern Ontario.

So you won’t need to bundle up and go outside to experience the magic of this year’s Toronto Santa Claus Parade. Santa Claus is still coming to town and to the comforts of your own TV room.