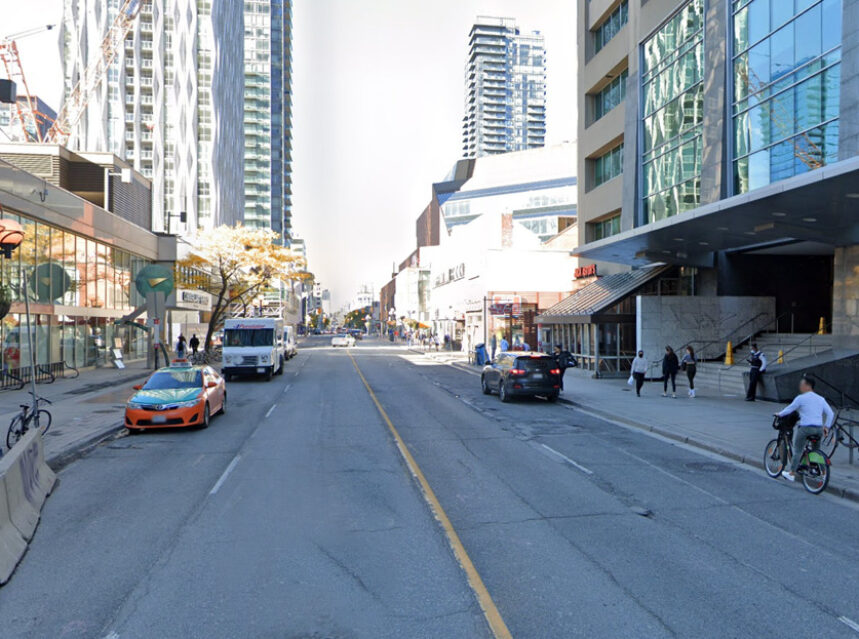 Today, the City of Toronto announced that a complete street transformation pilot project similar to the one that took place on Danforth Avenue last summer is in the works for midtown Yonge Street, between Bloor Street and Davisville Avenue.

A City of Toronto staff report on ActiveTO also recommends the return of major weekend road closures in 2021 to support the popular active program as well as a complete street pilot project along a section of Yonge Street to support the local economy and CaféTO with an expansion of the temporary ActiveTO cycling network. This all would be subject to further review of the potential impact to surface transit operations.

The City report also recommends an extension of the ActiveTO Bayview Cycling Corridor, installed in 2020 from Rosedale Valley Road to River Street. This extension would run south from River Street to Mill Street on a temporary basis in order to provide a detour route during the 2021 Lower Don Trail Construction Closure.

“This report shows that ActiveTO was a tremendous success in 2020 and City staff are confident that we can build upon that success this year. While planning work is continuing around the 2021 program, I think this report shows we are doing everything we can as a City government to support more active transportation options,” said Mayor John Tory.

ActiveTO was introduced in May 2020 as a quick-start COVID-19 response program. It was designed to provide more space for people to practice physical distancing while outside, support the overall well-being of residents and to quickly connect and expand Toronto’s cycling network by installing safe, separated temporary bike routes that mirror major transit lines.

Major Weekend Road Closure dates and locations of closures would be determined in the coming months, subject to the coordination of construction impacts, input from local councillors, and the future resumption of large-scale special events. Last year, weekend road closures typically occurred on parts of Lake Shore Boulevard and Bayview Avenue, and took place on 25 consecutive weekends from May through October. A portion of downtown Yonge Street was also closed for two Sundays in September as part of the program.

Major Weekend Road Closures provided more space for thousands of people to be physically active along Toronto’s busiest and most popular trails.

A survey of people who attended the ActiveTO weekend road closures found:

Although, the City report also recommends continuing the ActiveTO Major Road Closures program this year, due to major construction at the intersection of King-Queen-Queensway-Roncesvalles (KQQR) and The Queensway from Parkside Drive to Roncesvalles Avenue recurring weekend closures of Lake Shore Boulevard West likely cannot be accommodated in 2021 and 2022.

The report proposes that the ActiveTO cycling network program be expanded along Yonge Street, between Bloor Street and Davisville Avenue as part of a complete street pilot project.

An extension of the ActiveTO Bayview Cycling Corridor, installed in 2020 from Rosedale Valley Road to River Street, is also being recommended. This extension would run south from River Street to Mill Street on a temporary basis in order to provide a detour route during the 2021 Lower Don Trail Construction Closure.