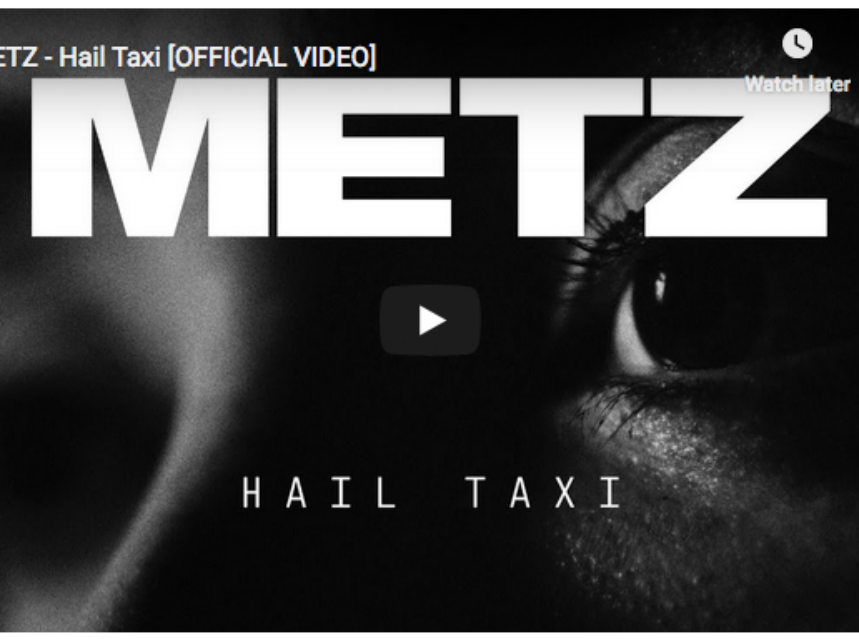 If METZ’s current mission is to mirror the inevitable struggles of adulthood, they’ve successfully managed to tap into the conflicted relationship between rebellion and revelry with the song’s tactics of offsetting their signature bombast with anthemic melodic resolutions.

“‘Hail Taxi’ is about looking back. The lyrics deal with the idea of reconciling or coming to terms with who you were and who you’ve become,” shares frontman Alex Edkins.

The stunning video, directed by A.F. Cortes, heightens these themes and expertly captures the same intensity as the alternately brutal verses and beguiling choruses of “Hail Taxi.”

Of the video, Cortes says, “I wanted to tell a simple story that captures the song’s overarching theme. The idea of longing for the past creates many visual motifs and I wanted to create a piece that feels timeless and conveys a sense of isolation, highlighting that while we can hide our feelings, we can’t run from them.”

Atlas Vending, the band’s most dynamic, dimensional, and compelling work of their career will be released on October 9th through Royal Mountain Records and Sub Pop. Bolstered by the co-production of Ben Greenberg (Uniform) and the engineering and mixing skills of Seth Manchester (Daughters, Lingua Ignota, The Body) at Machines with Magnets in Pawtucket, Rhode Island, Atlas Vending, the band’s fourth full-length album, sounds massive, articulate, and earnest.

Atlas Vending is out on October 9th on Royal Mountain Records and Sub Pop. It is available for pre-order here.