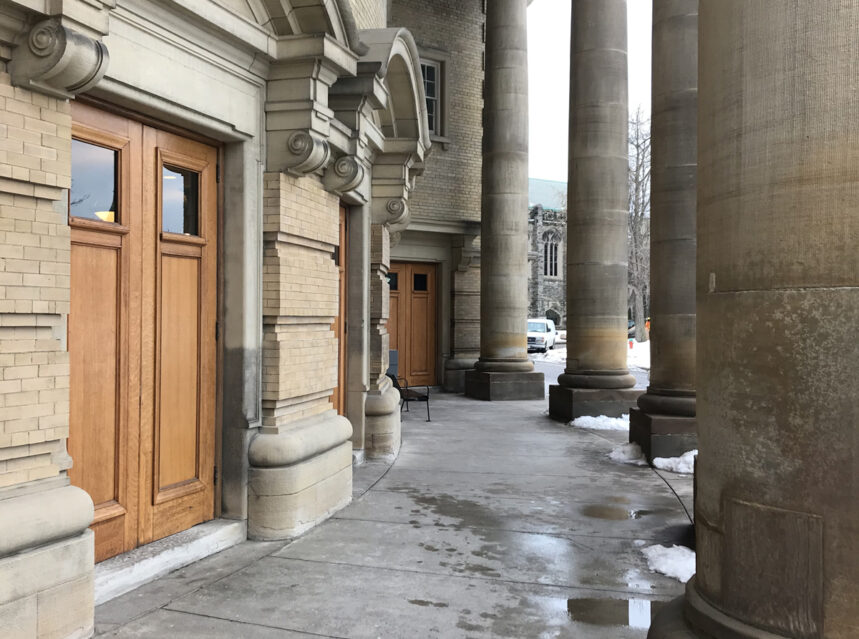 About 2,000 people attended a memorial at University of Toronto’s Convocation Hall on Sunday to remember the victims of a Ukrainian airliner shot down in Iran in a disaster that killed 57 Canadians. Mayor John Tory spoke and a video was played honouring all of those who lost their lives as beautiful santoor (hammered dulcimer) music played in the background.

Eight members of the U of T community, including six students, were among those whose names were on the plane’s passenger manifest. Below is a list of the U of T students and community members with links to some of their U of T stories.

There was also a vigil held Friday evening at University of Toronto’s Multi-Faith Centre. The ceremony, which was also attended by Elizabeth Dowdeswell, the lieutenant governor of Ontario, began with a reading of the names of the eight members of the U of T community who died in the crash. Photos of the victims were projected on a screen in the front of the room, which was so packed that other attendees had to watch the ceremony in a overflow room via video.

“We stand together in offering our sympathy, our compassion and our support,” President Meric Gertler said at the evening vigil. “To everyone here this evening, thank you for coming together to acknowledge this horrific tragedy, to mourn this unspeakable loss to our university, our city and our country, and to reaffirm our common humanity.”

According to a report by University of Toronto, President Gertler said he had “received messages of condolences and sympathy from government and university leaders from across Canada, and universities literally across the globe.”

Thousands more attended memorials around the country over the weekend which included one in Edmonton attended by Canadian Prime Minister, Justin Trudeau, and Foreign Affairs Minister François-Philippe Champagne. The Prime Minister addressed the 1,700 attendees at the Edmonton memorial service held in a basketball gym. Thirteen of the victims lived in Edmonton.

The PM began by saying it is a moment of national pain and thanked everyone including especially “the families and friends of those we lost.” Trudeau went on to sat that “across this great country we stand united together in this time of sorrow. All Canadians were heartbroken, shocked and outraged.”

The Prime Minister said the tragedy struck our Iranian community but it was also truly a Canadian traged and that “all Canadians are mourn your loss.”

Trudeau said meeting with several families talking about their loved ones and their plans for the future was gut wrenching speaking “family after family mourning the loss of a loved one who was not just shaping their own lives but building this country.”

Trudeau then declared “You are not alone your entire country stands together.”

No words can ease the pain, the grief, the outrage. It is my sincere hope you can find some comfort in knowing all Canadians stand with you. That is what makes this country so strong. You have my full support during this extraordinarily difficult time.”

The Prime Minister concluded his speech by saying “We are grateful that you are still with us giving us strength and purpose to stand together as a nation.