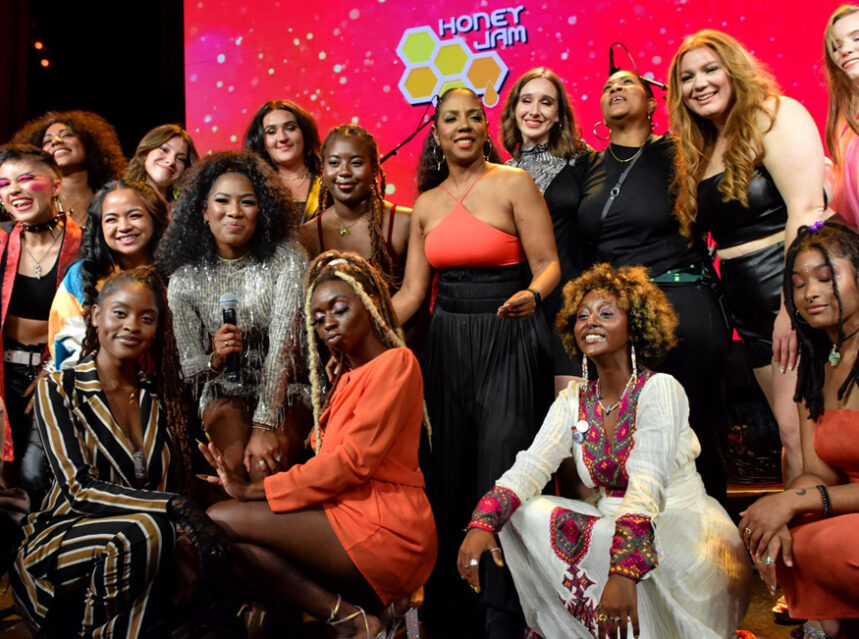 TORONTO, August 18,2022 – Toronto’s legendary El Mocambo was buzzing with talent last night as Honey Jam – a national youth artist development programme – kicked off to a packed house. Before the young Canadian talent lit up the stage, host Angeline Tetteh-Wayhoe (CBC’s The Block) and the Founder of Honey Jam, Ebonnie Rowe introduced the showcase to the enthusiastic audience.

Each the 14 artists got the stage buzzing with one of their own original songs. Toronto’s own, Sofinari was first to take the stage, lighting up the room with her confidence and smile. The 22-year-old RnB singer-songwriter performed ‘Not Enough’ her track about heartache and new love. The artist also received a special grant of $3,500 and a keyboard from Yamaha earlier in the evening.

What followed was high energy and powerhouse performances by all of the remaining artists including:

JUNEE 6XTEEN – a 17-year old singer and actor from Montreal, QC and past contestant on Quebec’s The Voice Kids who performed her previously released single ‘Ruined My Life’ about love and betrayal.

AshaLee – the 28-year-old Jamaican singer-songwriter based out of Toronto fused together Dancehall and RnB elements to deliver a high-energy rendition of her track ‘Say It’.

Siobhan Bodrug – the 17-year-old Toronto-based pop, RnB and jazz singer studying at the Wexford Collegiate School for the Arts performed a track she wrote during the pandemic – the echoey and vibrant ‘The End Lies Ahead’.

Leah Holtom – the 22-year-old singer-songwriter from Brampton stripped it back with an acoustic country, folk performance of her original song inspired by her grandmother ‘Lady Blue’.

Zamani – a 25-year-old Alternative R&B / Neo Soul / Urban Jazz and Pop singer-songwriter and producer from Halifax took the stage to perform ‘I Wish’ about a long-distance love.

Summer Bennett – the youngest of the group, celebrated her birthday last night, turning 15-years-old on the Honey Jam stage. The artist, from Paradise Newfoundland took the stage to perform a sweet rendition of her song ‘Carsick’ a metaphor for anxiety.

Villah – a 25-year-old Canadian-Filipina rapper from Burlington and the only hip-hop artist in the group performed her debut and yet to be released single ‘Cavity’, in her own words, “proving what it means to be tiny but mighty”.

Julianna Jones – a 24-year-old Toronto based RnB singer-songwriter brought the power, performing her single ‘Depend On You’ about personal experiences with love and life.

Aliah Guerra – a 25-year-old Canadian-Trinidadian Jazz artist from Montreal brought out the Neo Soul, RnB and Jazz vibes blending two original tracks ‘Wonderwoman’ – an empowering female anthem written about her mother and the groovy ‘Show Me (What You Wanna Do)’.

Feura – a 20-year-old Toronto-based performer, producer and DJ who incorporates Pop with a theatrical background and drag-inspired costuming and performance, performed the power-ballad ‘One Thing’ taking control of the stage with her own choreography.

Haleluya Hailu – a 19-year-old Vancouver-raised singer-songwriter and producer appeared on the stage last, but definitely not least. The Ethiopian artist performed her original song with themes of forgiveness ‘Forgive Me’

Additional highlights of the night included an intermission dance party with DJ MelBoogie and two special performances – the first, a rendition of Joni Mitchell’s ‘Both Sides Now’ lead by Leah Holtom on vocals and guitar while the other Honey Jam artists and alumni joined in on accompanying vocals and harmonies.

The second performance featured a tribute medley of Deborah Cox songs by Honey Jam alumni, celebrating her historic induction at the 2022 JUNO Awards as the first Black woman inducted into the Canadian Music Hall of Fame, which had the entire audience singing and dancing along to end the night on a high!