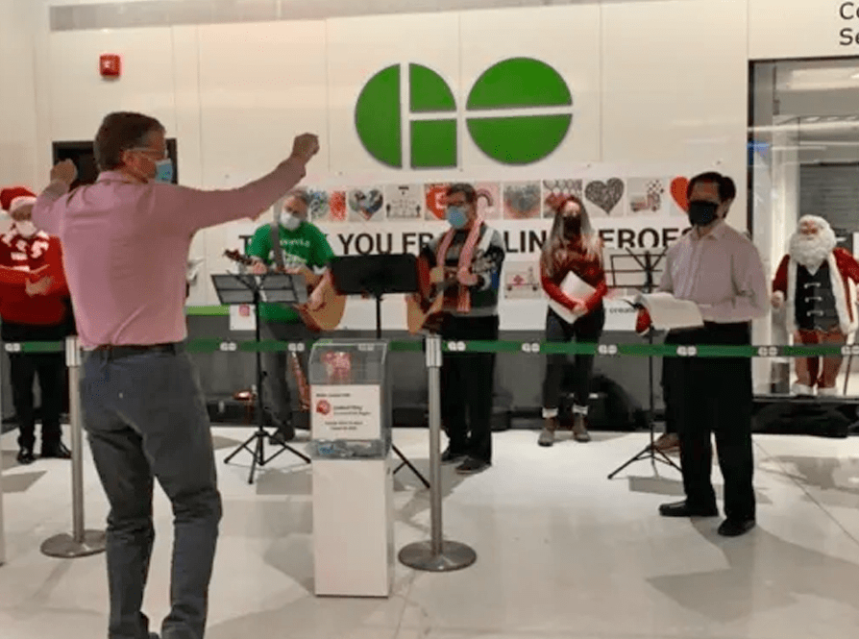 It’s a familiar site: customers rushing through Union Station’s York and Bay Concourses in the morning to catch a GO train or head to work. The only noise typically heard are boarding announcements, light chatter, and heels clicking. But for two days this month including today, a different type of sound will fill the air.

Sleigh bells ring, are you listening? If you happened to be in York Concourse during rush hour this morning (Dec. 15), you likely couldn’t help but hear holiday favourites belted out by Metrolinx carollers.

If you missed it because you are still working at the home office you can check out the performance here. And if you didn’t catch the Metrolinx carollers this morning, they’ll be back at it again Wed., Dec. 22 from 7 a.m. to 9 a.m. in Bay Concourse.

Since 2012, Metrolinx staff from departments across the board have gotten together to bring holiday cheer in the form of well-known Christmas tunes to Union Station during the month of December. And in these trying times, stopping to hear a simple song or two might be enough for people to hit pause on their troubles and enjoy the moment.

The last time Metrolinx carollers serenaded crowds was in 2019, as the pandemic silenced the music last year.

“People looked forward to us performing, and would stop and stay for one to two songs,” Madore recalled of past performances. “Some would sing along, some were moved to tears. It’s such a special interaction between us and customers.”

The Metrolinx carollers are also collecting funds for the United Way of Greater Toronto, with a fundraising goal of $5,000.

If you didn’t catch the Metrolinx carollers this morning, they’ll be back at it again Wed., Dec. 22 from 7 a.m. to 9 a.m. in the new Bay Concourse.

Lead photo Metrolinx President and CEO, Phil Verster, jumps in to conduct the carollers during a song. photo by Anne Marie Aikins photo