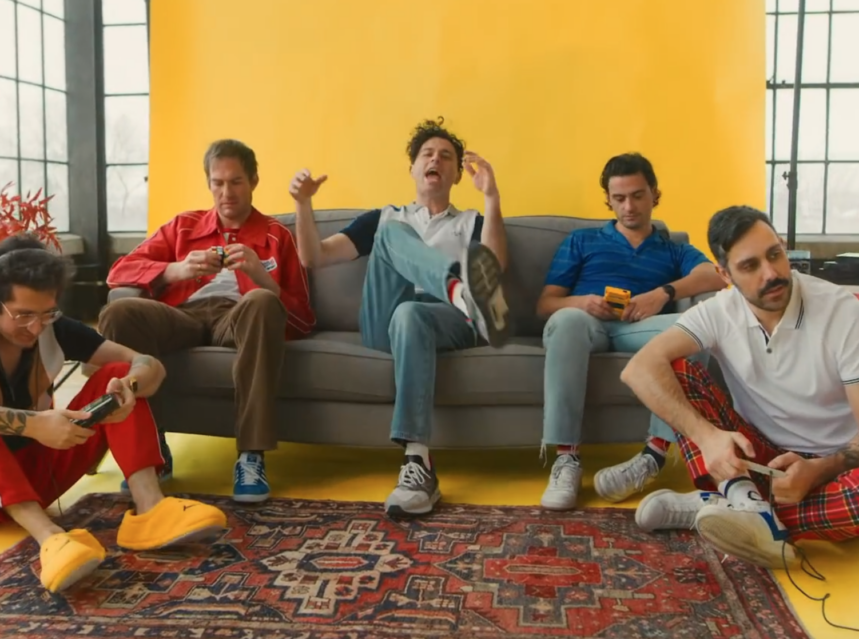 Hamilton’s Arkells can do no wrong and they just keep churning out the hits. Today they released yet another surefire hit single on all streaming platforms, entitled, “Years in the Making.” On social media the band had been hinting that something big was about to happen on Tuesday.

And big it was! Not only is lead singer Max Kerman sporting a huge bright orange fringe on his western style jacket, the catchy number prominently features their incredible horns section right up front in the mix and the the accompanying vibrantly coloured video produced by Harold Price of Occupied VR is directed by Chris Wong originally a producer/editor at MuchMusic.

“You never know when the universe will deliver a tune from the song gods, but ‘Years In The Making’ arrived just when we needed it,” frontman Max Kerman explains to popular Toronto alt rock station Indie 88. “It leans on a question we keep coming back to: How do we conceive of everything we’ve been through, and shape it to offer some love and hope? ‘Years In The Making’ is meant to encourage us to find ways to embrace the bumps in the road, because all of our challenges are ultimately there to help us work towards the dream – whatever that may be,” said Kerman.

The video prominently and not so coincidentally features the band all reading newspapers with “Years In The Making” as its headline. The concept falls in line with the Arkells’ recent social media campaign to inspire fans to support local newspapers and media outlets, by encouraging fans to “Stop running from the paywall” and subscribe to a news outlet of their choice, then send the Arkells a photo of the subscription for which they were awarded a very cool retro-style Arkells t-shirt prominently displaying an old-school typewriter.

The campaign was a huge success as the band mentioned at one point they had gifted over 1000 t-shirts and were very happy to do so because it supporting quality journalism is a cause in which they strongly believe.

The song itself has all the power and pop sensibility of hugely popular Aussie rockers INXS but has that definitive layered Arkells sound behind beautiful vocals and Max Kerman’s signature spirited and powerful voice that fans all know and love.

In the video Kerman’s bright orange custom fringed western jacket with YEARS prominently emblazoned across the back should have Arkells fans combing the jacket aisles of local thrift shops to jump on what could become a hot new Canadian trend. Yes, “That 70s style” might just be making a comeback.

No word yet on whether a sixth Arkells album will be dropping soon but fans may recall it was about a year and half between when the beloved Canadian rockers released the one-off single “Knocking at the Door” (later added to a deluxe edition of their hit album Morning Report in April 2017) that the Arkells then released People’s Champ off their popular “Rally Cry” album release in October 2018.

These days fans don’t need to wait years between album releases as streaming technology allows bands to get their music out as soon as it is ready either as a single of an EP. For that Arkells fans the world over are most thankful.

with a quote from Indie 88