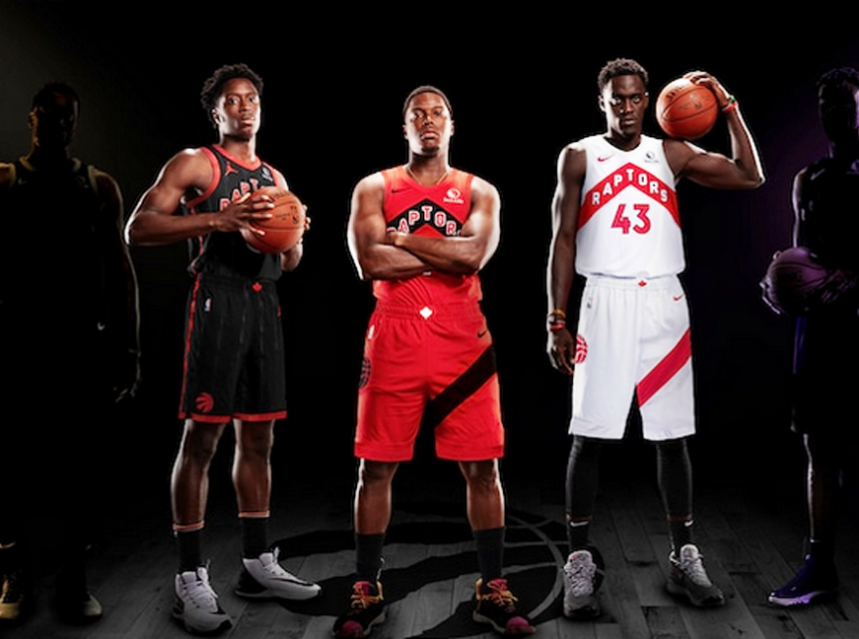 TORONTO, ON., Oct. 15, 2020 — Today, the Toronto Raptors unveiled three of the five uniforms the team will wear in the 2020-21 season. Their press release describes them as “showcasing simple but bold design, elements that weave together the lineage of previous uniforms, and a subtle nod to the franchise’s origins.”

Prominent on all three jerseys is familiar “north” pointing chevron that was first introduced on the jersey side panel in 2015-16 as part of the team’s rebrand.

“The new Association and Icon Edition jerseys – white and red – both feature a chevron across the chest, meant to symbolize the north, represent the team’s past achievements, and mark the path forward,” say Raptors officials.

The new uniforms are also similar to the red Earned Edition jerseys worn for much of the 2019 postseason season and it goes without saying they were sporting them when they captured the franchise’s first NBA Championship.

Check out the unveiling video:

“Uniforms do matter to players. Our team made the choice to wear the Earned jerseys during the 2019 Finals, for example,” Raptors President Masai Ujiri said in the press release. “We want to give our players – and our fans – jerseys they’re proud to wear not just because they say Raptors on the front, not just because they’re a symbol of our city and country, but because they also look great. I think that’s what we’ve achieved with these,” added the Raptors president.

The black jersey with red accents, referred to as the Statement Edition jersey, hearkens back to the Raptors’ original “dinosaur” uniforms with its dark grey jagged pinstripes throughout the design. The Raps say the ‘Statement Edition’ jersey will also be the only one of the five uniforms that has the Jordan Brand Jumpman logo on the right shoulder, replacing the Nike swoosh.

The unique concept was a collaborative effort between MLSE’s in-house design team and Nike. The new threads are comprised of recycled PET bottles, a combination of Alpha Yarns and recycled polyester. Each uniform represents approximately 20 recycled bottles.

“As we began to think about the decade ahead, we aimed to create uniforms that not only reflected our franchise’s historic accomplishment in 2019 but also inspired the pursuit of our next championship,” MLSE Chief Marketing Officer Shannon Hosford said. “Our goal was to continue to evolve our ‘We The North’ Raptors brand identity highlighting our key chevron design, which is synonymous with the North and our championship, while also providing our fans with some added swagger while they show their support.”

As Official Partner of the Toronto Raptors, Sun Life’s logo will appear on the left shoulder of each of the team’s jerseys for the fourth consecutive season.

The “edition” approach to NBA jerseys began in the 2017-18 season when NBA and Nike eliminated traditional “home” and “road” uniform designations and created four core uniforms for each team classified as “editions” – Association, Icon, Statement and City.

What determines which NBA jersey is worn on any given day?

Home teams pick which of their uniforms will be worn at all home games and visiting teams choose a contrasting uniform within their own assortment.

For fans looking to snap up the new Raps threads, the Raptors’ Association and Icon Edition jerseys are available for sale now at north.Realsports.ca, while the Statement Edition uniform is coming soon.

Two more editions are yet to be unveiled. The City and Earned Edition designs will be revealed closer to the start of the upcoming season, which the NBA says is likely December 1, 2020.