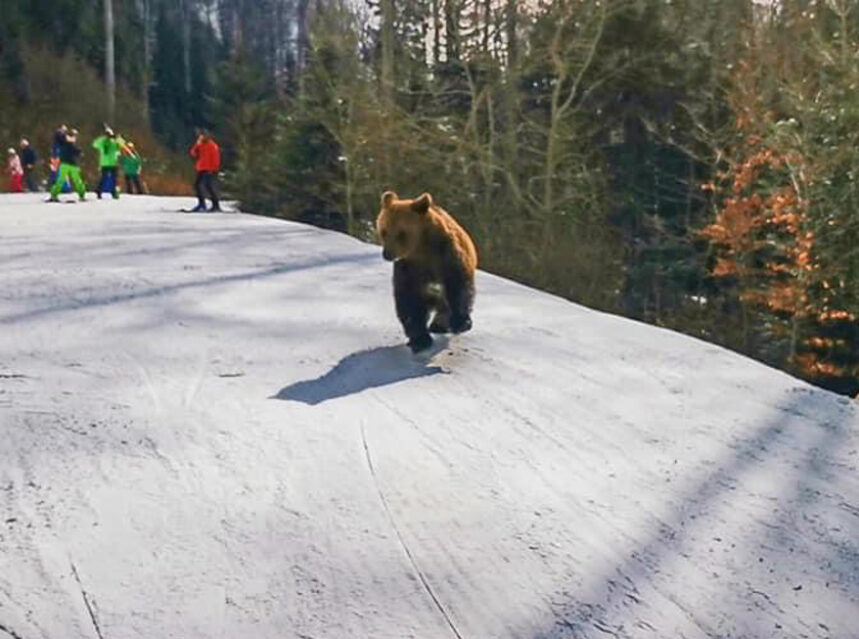 A ski instructor played the hero on Tuesday, March 8, luring a young brown bear away from a large group of skiers on a slope at Predeal Ski Resort in Transylvania, Romania.

A video has gone viral showing a skier talking in Romanian to a medium-sized juvenile brown bear that had ventured on piste.

The Romanian ski instructor Adrian Stoica, 50, started taking a video of the bear with a handheld camera after spotting him emerging from nearby trees when as he was about to begin a lesson. He told his ski lesson group to stay back and he calmly spoke to the bear that continued to approach in a curious and seemingly playful manner. At one point the young Brown bear crouched down on the edge of the ski run like a dog would in the throes of playing.

After a great deal of calmly speaking to the bear that was moving increasingly closer to the instructor and the group, Stoica decided to lure him away and down the hill, by skiing backwards. The bear began to chase him.

Stoica told ABC News: “I was just checking the ski slope condition before I take my students for a ski lesson. As I was skiing down the mountain, a bear suddenly appeared on the slope and a group of at least 15 skiers was trapped on the spot.”

“I told them to try to chase the bear away by making noise and shouting. It did not work.

‘I slowly waved my arms, slowly moved out of the group and made the bear come after me as he was really close to the group.

‘I was just hoping that the bear would get tired and would go back to the forest,” Stoica told ABCNews.

Stoica impressively was able to keep the camera and his eye on the bear while skiing backwards to lure it away from his ski group, many of whom had not only stopped in their tracks but also removed their skis.

The ski instructor seemed to be having some success as the bear chased him down the hill but then happened upon a second group of skiers, which placed him into a bit of a predicament.

I had to warn them carefully while both me and the bear came whizzing past them,” Stoica told ABC News.

He then stopped and continued to talk at the bear in Romanian showing no fear.

Eventually, the bear sauntered off piste and the skiers were able to resume their run.

The bear on Tuesday was the brother of another bear that chased a skier at the same resort in January. The skier escaped by removing his backpack which then became of greater interest to the pursuing bear.

There have been numerous bear sightings at the Romanian resort. Romania is home to 60% of Europe’s brown bears – the largest population of bears in Europe. There are believed to be over 200,000 brown bears in the world, of which 6,000 roam the forests of Romania.