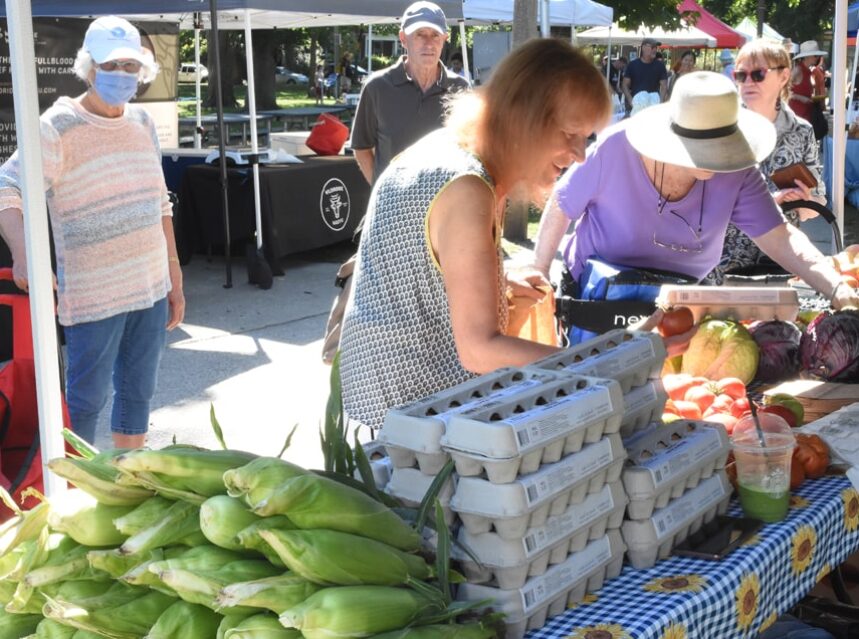 TORONTO, Sept. 12, 2022 – Located in the idyllic setting of Riverdale Park West, every Tuesday of the summer from 3 to 7 p.m., the cis making a serious comeback thanks to the area’s enthusiasts for organic locally grown produce.

It was Toronto’s first organic market in 2001, but by 2015 was forced to close as numbers dwindled down. But local food and farm-loving residents believed they could make this ecologically focused farmers’ market vibrant once again (as a Riverdale Urban Farming Inc. project). It reopened in 2016, and is now averaging about 950 patrons per week shopping for sustainable and local products from 20 to 25 vendors.

There’s a leisurely feel to this afternoon market – running through October 25 – where she finds, “a lot of people come to buy fresh foods, but also to see their neighbours.”

A senior named Dora has been out every week of the summer for the past few years.

“(It’s) organic vegetables, and it’s our neighbourhood,” she says. “Of course, this is the freshest.”

“It’s a nice little dog walk,” adds Sandy Delory. “And there are a lot of local products you won’t see at other shops. It’s a nice feel.”

Ruggles notes patrons of such markets are making the choice to support farmers who sustainably manage the soil, conserve water, and reduce the use of pesticides, and to help ensure Ontario food producers have equitable livelihoods competing against an expanding industrial food system.

Most vendors drive about two hours in to provide urban dwellers with freshly harvested, and produced food items.

Like J.P. Gural, of Samsara Fields Organics, in Norfolk County, who offers such taste treats as Yellow Crookneck Squash, and Spanish Roja Garlic,

After travelling through the developing world, he and his partner Soyoung found organic farming to be, not just an alternative lifestyle choice but, “an important direction if humanity wants to survive an impending environmental collapse.” They’ve been farming organically since 2010, and have been part of the Cabbagetown Farmers’ Market since it reopened,

“The term Samsara is the cycle of life and death,” he relates. “It really is important to understand organics, soil, water, it really is a continuum.”

Another stall is run by the non-profit Green Thumbs Growing Kids, whose mission is “to cultivate environmental stewardship through hands-on garden and food education for urban children, and their communities.”

The market location is a natural given Cabbagetown’s rich history dating back to the 1880’s (when Irish immigrants grew cabbage on their front lawns), and it being right next to the long-running Riverdale Farm (which is open until 5 p.m. on Tuesday for those wanting to pay a visit).

Cabbagetown Farmers’ Market is situated at the cross streets of Winchester and Sumach Sts. There is parking on the streets surrounding Riverdale Park West, while the nearest TTC stops are on Parliament St. For further information, email info@cabbagetownmarket.ca.