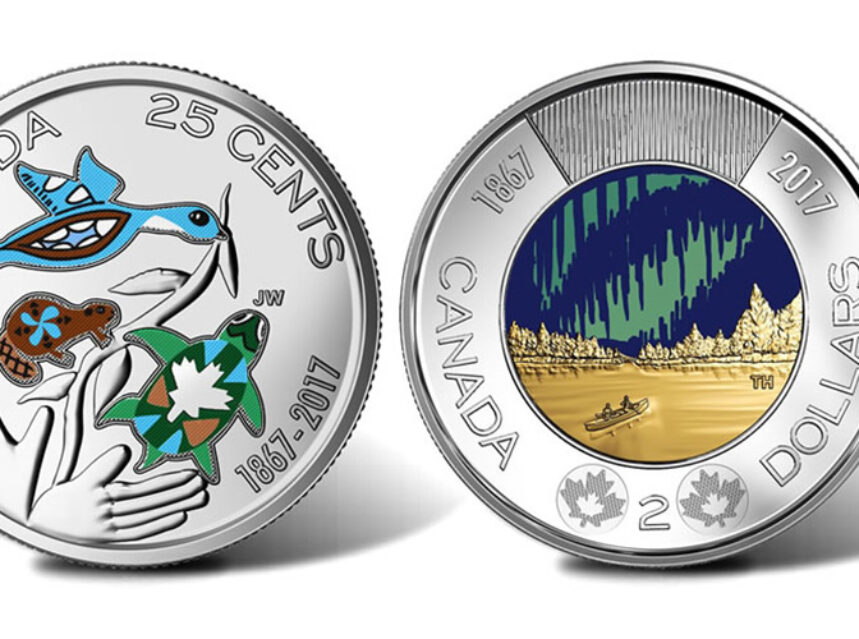 Canada’s 150th Glowing Coins – It’s Canada’s 150th Anniversary of Confederation this year and to commemorate it, special coins and bank notes have been released. The Royal Canadian Mint unveiled a limited-edition, glow-in-the-dark ‘Toonie’ ($2 coin). The specially designed Toonie is the world’s first glow-in-the-dark coin in circulation and features the Northern Lights, as drawn by B.C. artist Timothy Hsia. The coins were made by using the mint’s ‘new pad-printed process and a new ink formulation containing luminescent material’, according to a spokesperson from the Royal Canadian Mint. About three million of the Toonies have been put into circulation and more will appear as the banks replenish their coin inventory.

The Toonie is the first to be released and will be followed by other celebration coins; ‘Canada 150’ versions of the Loonie ($1 coin), quarter, dime and nickel. Each coin will feature special artwork that was chosen in a contest last year. There is also a new $3 coin, so far being dubbed a ‘throonie’. It’s made of pure silver and features an assortment of Canadian symbols including a moose, an inukshuk and at the very top of the maple leaf, a couple of hockey sticks. It is not in general circulation but is available for $19.95 at www.mint.ca.

The Bank of Canada began circulating a $10 ‘Canada 150’ bank note on June 1st to celebrate the 150th anniversary. It has new security features including ‘a colour-shifting image of an arch found in the Memorial Chamber on Parliament Hill, as well as three-dimensional maple leaves.’

You can now get the new $10 bill over the counter at financial institutions across the country. Only 40 million are being issued, roughly equal to Canada’s population.

“This bank note reflects the pride we feel about our country’s accomplishments and the hope we have for our future,” said Stephen S. Poloz, the current Governor of the Bank of Canada. “But it also underpins the confidence Canadians can have in their bank notes. The new security features of this $10 note make it the most secure Canadian bank note to date.”

The note celebrates Canada’s history, land and culture, as the country marks this important milestone. Four Canadians who played significant roles in the country’s parliamentary history are portrayed on the front of the note: Sir John A. Macdonald, Canada’s first prime minister; Sir George-Étienne Cartier, a principal architect of Canadian federalism; Agnes Macphail, the first woman elected to the Canadian House of Commons; and James Gladstone, or Akay-na-muka (his Blackfoot name), Canada’s first senator of First Nations origin. Human rights and freedoms icon Viola Desmond will be featured on a new, regularly circulating $10 note expected in late 2018.

The design also incorporates other cultural elements: a reproduction of the artwork Owl’s Bouquet by world-renowned Inuit artist Kenojuak Ashevak and the distinctive arrow sash pattern, an important symbol of the Métis nation that also pays homage to the French-Canadian voyageurs of the 18th century.

“This year, Canadians will have the opportunity to reflect on our history and celebrate our heritage. With this note to commemorate 150 years of Confederation, we are reminded of our strengths: our rich diversity and our enduring hope for a brighter tomorrow,” said Ginette Petitpas Taylor, the Parliamentary Secretary to the Minister of Finance.

This is only the fourth time that the Bank of Canada has issued a commemorative note. The first, issued in 1935, celebrated the Silver Jubilee of King George V; the second, issued in 1967, marked the centennial of Confederation; and the third, issued in 2015, honoured the historic reign of Her Majesty Queen Elizabeth II, who became the longest-reigning sovereign in Canada’s modern era.

The special coins and bank notes may be a collector’s dream, but as Canada celebrates its sesquicentennial anniversary, we should take pride in all that we the people have accomplished, regardless of our political affiliations. The issuing of special coins and bank notes are but a symbol of all we have been and all that we can be. Let’s remember next time, when we pull a glow-in-the dark coin out of our pocket – to allow the glow to come from our hearts.