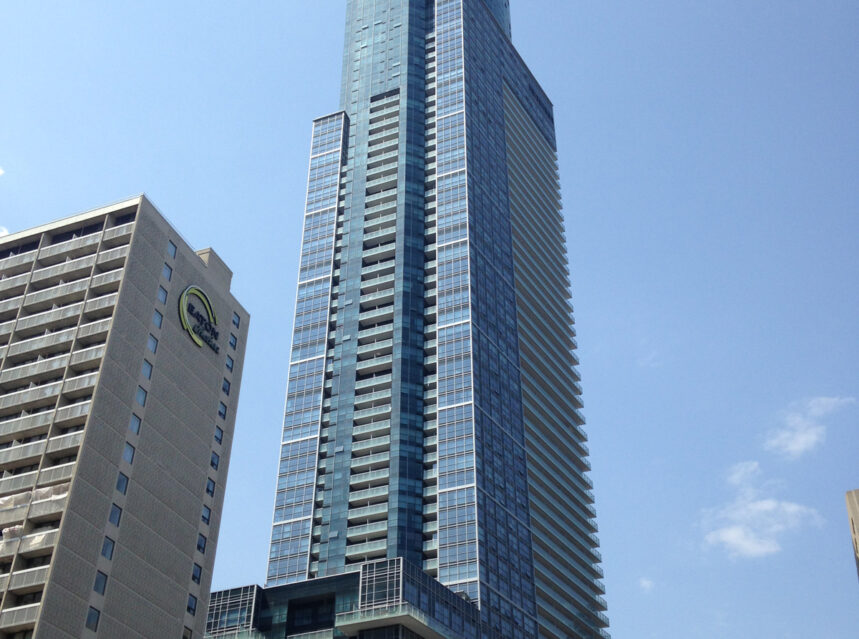 Canada’s tallest condo without water – Residents in Toronto’s Aura, a 78-storey mixed-use skyscraper had a rude awakening when they went to turn on their taps this morning and no water appeared.

Condo unit owners received emails from management stating that low pressure levels from the City side caused AURA’s booster pumps to cease at around 2 am. The statement from management says the pumps are unique to AURA and could take as long as 7 weeks to repair.

But AURA residents can now breathe a big sigh of relief, Toronto Times has just learned that “management are pleased to announce they have found an alternative solution and water should be restored by midnight.”

Also, residents have been told that they can use showers and washrooms in Crunch Fitness on the fourth floor of Aura and that bottled water will be available in their lobby starting at 4:00 pm.

The Management and Board also issued an update on exactly what happened. The building is equipped with multiple water pumps to supply its water. Many of these pumps broke down due to situations out of their control,” says the management. They also said the pumps are on order but could take several weeks to arrive. Then last night a broken City water main from the adjacent building led to the breakdown of the last remaining working pump at AURA.

This morning, residents assembled in the condo’s lobby fearing the worst because that was what AURA management was projecting. They were looking for answers and concerned about where they were going to find housing to get them through the seven weeks of waiting for the repair to take place.

The mixed-use condo, which took four years to complete in 2014 is located at 386 Yonge Street in the College Park area of Yonge and Gerrard. With 79 floors and 995 units, AURA is currently recognised as having more floors than any other building in Canada and is the fourth tallest building in the country standing at 273 metres (896 ft.). Only Toronto’s First Canadian Place, St. Regis and Scotia Plaza stand taller.

A follow-up statement told residents that a team of technicians were working on the site and they are trying alternative options to resolve the matter. The letter says the Canderel, the builder has been notified and is looking into borrowing a pump from a construction site while the manufacturer of the ceased pumps is now also on the case.

The most recent statement says the taps should be flowing again by midnight. So, what began as a shocking blow and major inconvenience and stress to AURA residents has now become a minor inconvenience as they wait for their water to come back on.

On January 22, the City had announced that downtown residents in specific areas may receive lower water pressure as they were commencing emergency watermain repairs near Gerrard and Yonge. The statement read: “the City of Toronto will begin repairs on a watermain near Gerrard Street and Yonge Street that was damaged by a private contractor on January 20.”

AURA building in Toronto no water, AURA condo without water, Water back on by midnight at AURA condo