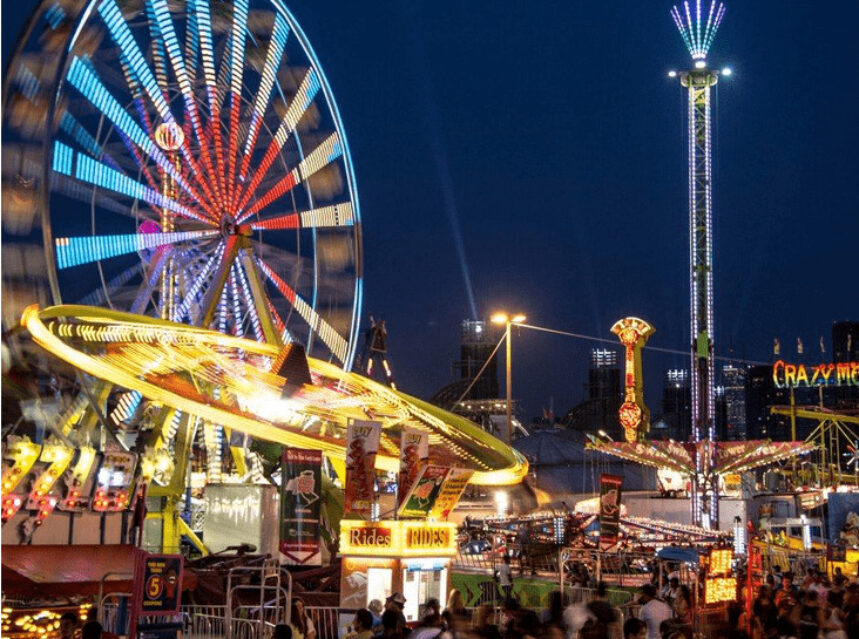 Here’s what’s happening at the CNE this year

TORONTO Aug. 8, 2022 – The wait is over. After what seems like an incredibly long two-year hiatus, the Canadian National Exhibition (CNE) will mark its highly anticipated return August 19 to September 5, 2022 at Exhibtion Place for 18 fun-filled days of all-new features and returning events expected to attract more than 1.4 million visitors through the iconic Princes’ Gates.

This year, the CNE has raised the bar sky-high (literally) with a dazzling nightly Drone Show, created for The EX featuring 100 drones that will light up the night with precise formations and colourful images. Drones also play a role in the CNE’s new multimedia show, NEVAEH & The NorthStar presented by VinFast, that merges the most cutting-edge theatrical technology, pyrotechnics, and augmented reality, to take audiences on an immersive odyssey through time, land, sea and galaxies.

The Celebrity Kitchen Stage is also back for the first time since 2017, to dish up some inspiring meal ideas from chefs Claudio Aprile (MasterChef Canada), Corbin Tomaszeski (Dinner Party Wars), Bob Blumer (Surreal Gourmet), and Matt Dean Pettit (Rock Lobster Food Co.) to name a few.Therehasnever been a shortage of photo opportunities at The EX, whether it’s in front of the illuminated CNE Sign, or overlooking the fair on the Sky Ride (celebrating its 10th anniversary) –and NEW this year on the Midway, it will be hard to miss the 34ft tall Double-Decker Merry-Go-Round, a picturesque menagerie of lights and colours offering a new Insta-worthy POV of the CNE. Whether capturing the views, creating new memories, or enjoying the sights, sounds and tastes of the CNE, there are plenty of reasons to say,“Let’s Go (Back) To The EX!”

Watch the skies above the Food Building come to life in a spectacle of dancing lights! Cap off a fun-filled day at the fair with acolourfully dynamic Drone Show featuring100 drones that will illuminate the night with an array of stunning images. The show is designed by Canadian company and leading drone formation specialists, North Star Entertainment, who have wowed audiences at major events for the NFL, NBA and NASCAR. (Aug.19–Sept.4, at 10:45pm above theFood Building)

To commemorate the 100thanniversary of the publication of James Joyce’s Ulysses, a new festival takes over Princes’ Boulevard for a rousing weekend that celebrates Celtic culture with music, entertainment and food. (Sept.1 –5, Princes’ Blvd)

Back by popular demand, the CNE’s Gaming Garage Powered by AMD & Innovation Garage arebigger and better than ever! New this year the gaming extravaganza will run throughout all18 days of the fair featuring everything from esports and pinball tournaments to Dungeons and Dragons, board games, VR, Video Game Dance Floor, and more. As well, The Emerging innovators Pitch Competition takes place Aug.28, convening Canada’s brightest innovators to pitch their inventions and compete for cash prizes;and a Robotics Competition takes place Sept. 2 –4, where contestants and their creators will spar head-to-head to determine which bot will take the crown. (Daily, 2 & 5 pm Enercare Centre Hall B)

SuperDogs –Get ready for apaw-some good time with the SuperDogs!Celebrating their 40th anniversary, these incredible canines will unleash their superpowers in a high-energy, high-flying adventureshow, PAWVENGERS. (Daily, Enercare Centre Hall D)

Step into Doorways to the Pastdisplayed throughout the grounds for an interactive journey of The EX through the eras;travel back in time and walk through the iconic history of the CNE and its storied grounds with the CNE Heritage Immersive Experience (Enercare Centre Heritage Court Gallery); or join the CNE Ghost Walksto learn about the fair’s haunted history and legendary spirits.

Enjoy summer nights outdoors while rocking out with Tom Cochrane or Marianas Trench; jammin’ to the reggae tunes of Jay Douglas; singing along to Gordon Lightfoot’s greatest hits — or discover new music from JUNO-winning artists including Indigenous singer-songwriter iskwē and 2022 Breakthrough Group of the Year MONOWHALES, and more!All concerts and performances are FREE with CNE admission. New this year, the Bandshell is shining the spotlight on some of Canada’s funniest acts, headlined by America’s Got Talent judge and one of the most successful comedians in the world, Howie Mandel, on Aug. 19.

So much going on at Kids’ World –

Families can enjoy the mini- Midway for kids, interactive programs such as the Pizza Nova Pizza-Making Shop, and plenty of entertainment on the Kids World Stage from characters such as Bob the Builder, Dorothy & Wags from The Wiggles, and more! NEW this year in Kids World is a topsy turvy cirque-tacular show, Cirque Wonderland; a Dino Dig –where aspiring paleontologists can dig for prehistoric artefacts; and Chalkmaster Dave who will be creating amazing chalk art in Kids World.

Art at the CNE

Turn Off the Plastic Tap– Famed Canadian artist, activist, and photographer Benjamin Von Wong presents #TurnOffThePlasticTap, a massive 25’ x 30’ art installation that comments on the overuse of plastics by using discarded plastic. Best known for his environmental art installations and hyper-realistic art style, Von Wong’s masterpiece hopes to inspire audiences to “turn off the tap” on their plastic use. (Daily, Enercare Centre Hall A)

National Geographic’s The Greatest Wildlife Photos Exhibit -The world’s most striking wildlife images will be on display at the CNE. For 115 years, National Geographic has pioneered and championed the art of wildlife photography, and captivated generations of audiences with a steady stream of extraordinary images of animals in nature. (Daily, Arts,Crafts and Hobbies Pavilion & Enercare Centre, Hall A)

Charles Pachter (aka Johnnie at the Fair) Exhibit: A Romance with Canada -The CNE is honouring the work of esteemed Canadian painter Charles Pachter and his unique connection to the fair. Pachter starred in the National Film Board of Canada’s Johnnie at the Fair, which celebrated a five-year old child’s experience at the 1947 CNE after the fair had been closed from 1942 and 1946 due to the Second World War. Some of his most renowned works and favourite subject matter will be on display including The Queen & Mooseseries. (Daily, Withrow Common Gallery)

*Plus HST and applicable feesTo purchase tickets, ride passes,and for more information on discounts and promotions, go to www.TheEx.com

The Canadian National Exhibition is Canada’s largest community event and one of the top 10 agricultural exhibitions in North America. Founded in 1879, the CNE generates an economic impact of approximately $93.1. million for the Greater Toronto Area and $128.3 million for the province of Ontario each year (when in operation). It is celebrated as one of the “greenest” fairs in North America and attracted 1.4 million visitors over 18 days back in 2019.

CNE shows, what's happening at the CNE this year