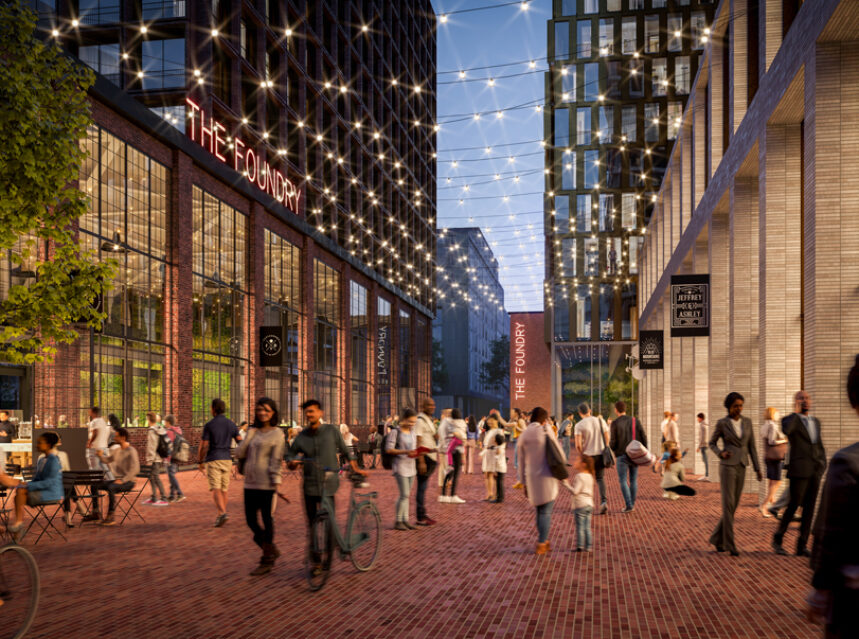 Toronto –February 24, 2021 — Friends of the Foundry today released an exploratory concept illustrating how heritage and affordable housing can be used to create a new future for the historic Dominion Foundry site on Eastern Avenue in Toronto’s West Don Lands.

The design renderings by Norm Li are both exciting and beautiful. Think Distillery District meets tasteful modern housing (including affordable housing) that complements its surroundings. The design concept offers one idea for how this site can help retain some of Toronto’s few remaining industrial railway buildings while contributing significant and desperately needed new affordable and market housing as well as community space.

This is in contrast to what we know of the Province’s plan (that was already moving forward) to demolish the site’s heritage buildings and develop three tall residential towers. After a great deal of community protests and outpouring of concern for the destruction of the city’s heritage buildings, a provincial judge, Justice David L. Corbett granted interim relief from the imminent demolition of the several heritage buildings at the Dominion Foundry Complex in Toronto’s West Donlands and also stated that the province must consult with the City of Toronto and and the community about redeveloping the property without destroying heritage buildings.

Meahwhile, Toronto Mayor John Tory says he believes “a path forward can be found that gets more affordable housing built and at the same time addresses community concerns around heritage and public consultation.”

“It is my hope that we can use this time to resolve this situation with the government of Ontario,” said Mayor John Tory in a press statement.

“There has been a great deal of public support for preserving the Foundry site with more than 23,000 people asking the province to stop the demolition they started without warning on January 14,” says Cynthia Wilkey, the co-chair of the West DonLands Committee.

Many of us are deeply concerned about what was happening at the Foundry site. A number of community-minded architects, urban designers and affordable housing experts welcomed an opportunity to support the advocacy of Friends of the Foundry by considering what might be possible to protect and preserve the valuable heritage on the site.

“The initial rationale for demolition seems to derive from the mistaken belief that it would not be possible to both provide a robust housing program and preserve the exceptional heritage buildings on the site, in particular the Machine Shop and the Foundry Building and that demolition is required because of environmental remediation.” says Ken Greenberg an architect and urban designer, living in Toronto. “Both are false and misleading. Our work together is intended to demonstrate that it IS possible to do both including the provision of a generous public realm and streetscape that integrates the site within its context in the evolving West Don Lands neighbourhood,” says Greenberg.

“The design concept delivers approximately 688,400 square feet of gross floor area, preserving the Foundry’s two most important buildings and contributing 870 residential units, of which a minimum of 30% are proposed to be affordable, with 120,000 square feet of community uses and retail.

“This concept has been guided by development principles that are anchored in the historical context of the Foundry and builds on what has become a well-loved neighbourhood with a distinctive sense of place,” said Shirley Blumberg of KPMB Architects. “We are honoured to contribute to the discussion and hope it unleashes our collective imagination on what we can do on this historic site,” said Blumberg.

Friends of the Foundry released the conceptual scheme in advance of a meeting today with provincial officials to discuss the future of the site. “The province has scheduled only three brief meetings with groups over this one afternoon and buried an invitation to send thoughts by email,” says Suzanne Kavanagh from the St. Lawrence Neighbourhood Association. “These gestures in no way meet the meaningful public engagement standards that are considered acceptable and that we expect at this site,” says Kavanagh.

Friends of the Foundry is calling on the province to work with the community and the City of Toronto, starting with a new open competition with the right terms of reference that protect heritage, get the best possible affordable housing options,and deliver the best for this community in the long term.

“Let’s not waste this opportunity to create something we can all be proud of -a vibrant mixed-income, mixed-used community that addresses our affordable housing crisis, contributes new community space,and respects and leverages the legacy of the Foundry,” says Kavanagh.

For tons more information and to find out how you can get involved, and also sign the petition visit the website for Friends of the Foundry and click on ‘Take Action.”

SOURCE Friends of the Foundry