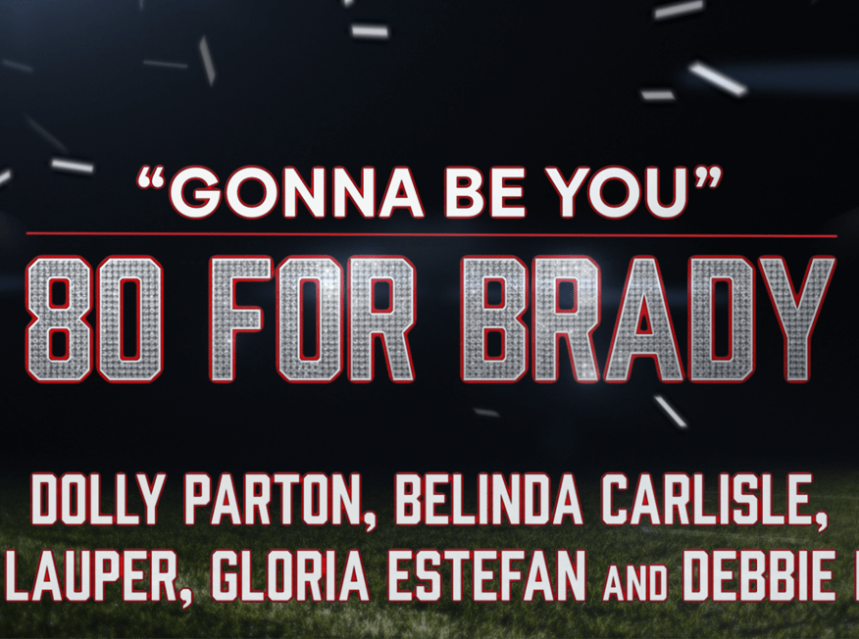 TORONTO, ON (January 5, 2023) – Today, an all-star cast of iconic singers including Dolly Parton, Belinda Carlisle, Cyndi Lauper, Gloria Estefan, and Debbie Harry announce the upcoming release of the new single “Gonna Be You” from the Paramount Pictures film 80 FOR BRADY.

The song is written by iconic Honorary Oscar®, Grammy and Emmy Award-winning songwriter Diane Warren to be released on January 20 via R.A.F/BMG.

“When I wrote ‘Gonna Be You’ for 80 FOR BRADY, I wanted to write a song that celebrated these women’s deep friendship,” says Warren. “Since 80 was in the title I got a crazy idea, why not get some of the most iconic singers from the 80s, who are still amazing and always will be, to all sing it?! Everyone I approached said yes and was just as excited as me. I’m honoured to have Dolly Parton, Belinda Carlisle, Cyndi Lauper, Gloria Estefan and Debbie Harry on this song. ‘Gonna Be You’ is that song you want to sing along to with all your good friends!!!”

The newly released single joins Diane Warren’s beyond-impressive songwriting resume that includes countless staples of modern music history including “Because You Loved Me” (Celine Dion), “Can’t Fight The Moonlight” (LeAnn Rimes), “How Do I Live” (by both LeAnn Rimes and Trisha Yearwood), “I Didn’t Know My Own Strength” (Whitney Houston), “I Learned From The Best” (Whitney Houston), “Love Can Move Mountains” (Celine Dion), “I Don’t Want To Miss A Thing” (Aerosmith), and dozens more. The list of legends and icons Warren has written for, from Aretha Franklin to Willie Nelson to Reba McEntire to Cher, is jaw-dropping. But she also continues to work with many of today’s most popular acts, including Beyoncé, Lady Gaga, Justin Bieber, Christina Aguilera, Snoop Dogg, Kelly Clarkson, Carrie Underwood, Jennifer Hudson, Andra Day, Demi Lovato, Common, Janelle Monáe, Zendaya, Emeli Sandé and Mickey Guyton.

Diane Warren has penned nine #1 and thirty-two top 10 hits on the Billboard Hot 100 and was inducted into the Songwriters Hall of Fame in 2001. Warren is an Honorary Oscar recipient, 13-time Oscar nominee, Grammy, Emmy and 2-time Golden Globe award winner whose songs have been featured in more than 100 motion pictures and has a star on the Hollywood Walk of Fame.

Most recently, Warren wrote the original song “Applause” performed by Sofia Carson for the feature film Tell It Like a Woman.  Her independent spirit has also made her a pioneer in the entertainment business: She is the sole owner of her publishing company Realsongs, the most successful female-owned and-operated business in the music industry.