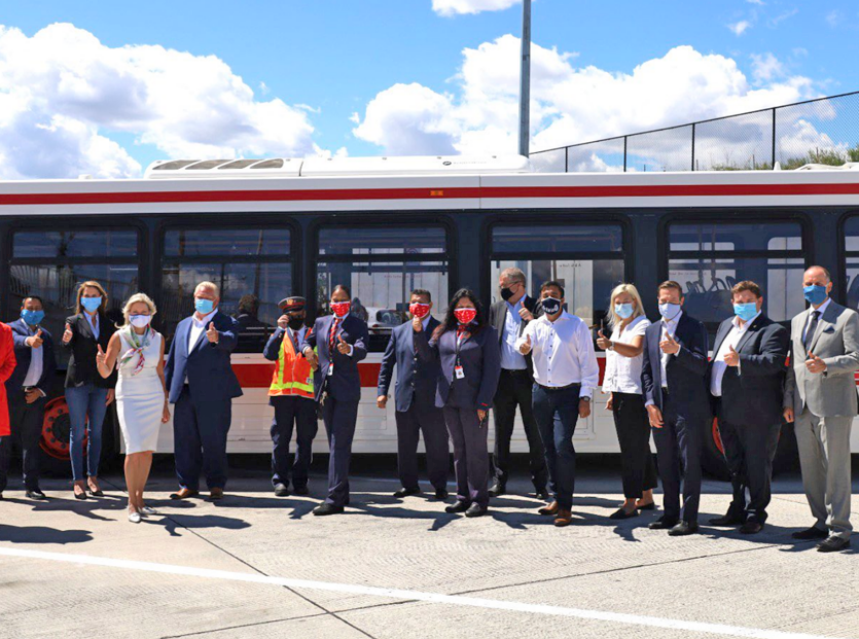 TORONTO, ON. Aug. 18, 2020 ― Yesterday, the Ontario government made a big groundbreaking announcement that it is one step closer to getting shovels in the ground on part of the largest subway expansion in Canadian history with the planned release of a Request for Proposals (RFP) today to advance tunnelling work on the Eglinton Crosstown West Extension (ECWE).

The Eglinton Crosstown West Extension (ECWE) will extend the Eglinton Crosstown Light Rail Transit project, currently under construction, by 9.2 km from the future Mount Dennis Station to Renforth Drive. The extension will create much needed connections between different transit systems throughout the region including Mississauga’s MiWay and GO bus services via the Mississauga Transitway at Renforth Drive, UP Express and Kitchener Line GO train service at Mount Dennis, and TTC bus services at transit stops in Toronto.

The province says it is also committed to establishing connectivity to Pearson International Airport.

“Today marks another step forward in delivering modern underground rapid transit to connect people from across Toronto and Mississauga to one of the country’s largest employment centres,” said Premier Ford. “Working with our partners, we will reduce travel times for riders and get more vehicles off our roads, so people can spend more time with their families.”

Mississauga Mayor Bonnie Crombie was also at the ceremony to weigh-in on how important the extension is to creating a better connection with Toronto.

For decades Mississauga residents have longed for a more convenient connection to the TTC subway and although it isn’t the often discussed extension from Kipling Station to Square One, it is a very good start to fully connecting the transit systems of Misssissauga and Toronto.

Mississauga’s Mayor Crombie said, “It will allow for more frequent and rapid service to the Airport Corporate Centre and, eventually, Pearson Airport, which will one day be Mississauga’s Union Station West.”

The terminus for the ECWE will be at Renforth Station, which is located in Mississauga, at the easternmost end of the 18-kilometre Mississauga Transitway. The 12-station Transitway is a dedicated bus corridor in Mississauga running from Winston Churchill Boulevard to Renforth Drive.

“I want to thank the province for advancing the important work needed to extend and connect the Eglinton Crosstown to Renforth Station,” said Mississauga Mayor Bonnie Crombie. “Once complete, this will serve as Mississauga’s newest east to west regional transit link and fully connect our transit system to Toronto and the GTA,” said Crombie.

On August 20, 2020, the province will invite the selected teams from the Request for Qualifications (RFQ) process to respond to an RFP that details how they plan to design and deliver the tunnelling work for the Eglinton Crosstown West Extension. Upon evaluating the proposals received, Infrastructure Ontario (IO) and Metrolinx expect to award this tunnelling contract in mid-2021.

“We are making smart, long-term transit investments to address congestion, and give the people of Etobicoke, Mississauga, and the rest of the Greater Toronto Area more options to get where they need to be,” said Minister Mulroney. “Our government is committed to ensuring that our vital transit projects empower people and provide additional benefits for the communities in which they are being built.”

To expedite work on the Eglinton Crosstown West Extension, tunnelling will begin first, followed by separate contracts for the balance of the work.

“Today’s announcement gets us one step closer to closing the transit gap along the Eglinton corridor and to connecting communities and families to urban growth centres and employment hubs in Toronto and Mississauga,” said Associate Minister Surma. “But we can’t build projects of this magnitude alone. We need the federal government to come to the table and fund at least 40 per cent of the Eglinton Crosstown West Extension and our other three nationally significant subway projects.”

The release of the RFP is part of the government’s continued commitment to deliver the largest subway expansion in the country’s history to commuters and businesses in the Greater Toronto Area (GTA). On August 5, 2020, Ontario announced three teams of bidders per project were shortlisted to advance tunnelling work on two of the four priority transit projects, the Scarborough Subway Extension and the Eglinton Crosstown West Extension, included in the Subway Transit Plan for the GTA.

In April 2019, the province announced its historic new transportation vision, with a preliminary estimated cost of $28.5 billion. In addition to the Scarborough Subway Extension and the Eglinton Crosstown West Extension, this plan includes the all-new Ontario Line and the Yonge North Subway Extension. Planning is underway for all four priority projects and procurements will be staged to ensure each project is delivered successfully.