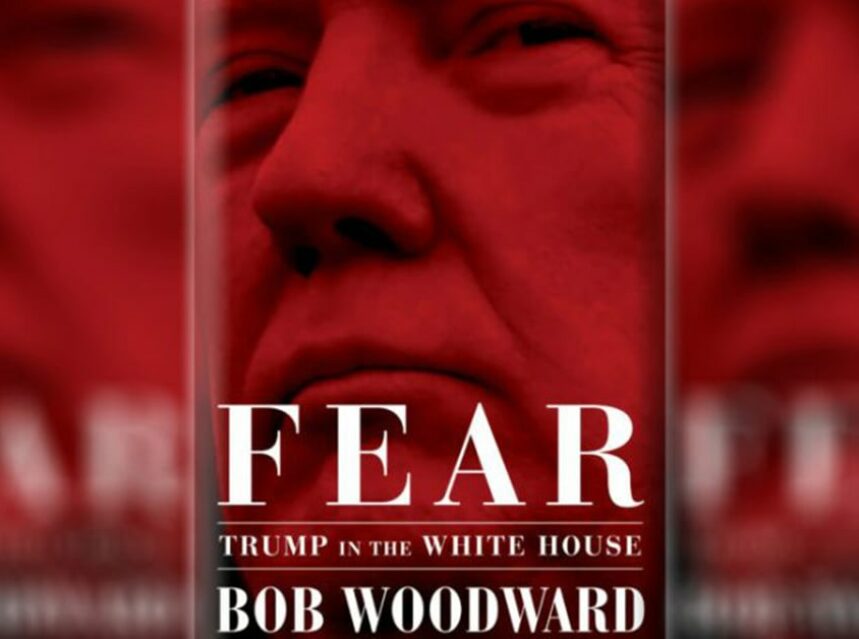 Since the beginning of this year, which marked the first anniversary of Donald Trump being sworn in as the 45th President of the United States, there has been a whole tidal wave of books that has examined practically every aspect of his controversial presidency. Whether they were written by insiders, outsiders, experts, journalists or pundits, or looked at Trump the president, what goes on inside his White House, or his alleged Russian connection, you can fill an entire case of bookstore shelves with books about President Trump, favourable and unfavourable.

Consider this. Michael Wolff’s runaway bestseller Fire and Fury was the spark that lit the fuse; Bob Woodward’s latest inside presidential tome Fear is the explosion.

While Wolff’s book was more like a “fly-on-the-wall” approach to what is going on behind the walls of 1600 Pennsylvania Avenue during the first year of the Trump administration, Woodward, using his Pulitzer Prize-winning skills as an investigative reporter and best selling author (by conducting hundreds of hours of interviews and doing diligent research through plenty of official and secret documentation), gives a chilling, frustrating portrait of how this apathetic train wreck is running things from his perch of the Resolute desk in the Oval Office.

When he was a presidential candidate, Trump admitted that fear was real power. But when you read Woodward’s book, the real fear that arises is how in less than two years in office, he has ran the presidency with a complete disregard for the office, and a complete disrespect for the traditions and procedures that have been developed for over 200 years in order to realize the chief executive’s legislative agenda.

“All presidencies are audience driven, but Trump’s central audience was often himself. He kept giving himself reviews. Most were passionately positive. Much of his brain was in the press box,” writes Woodward. “The operations of the Oval Office and White House were less the Art of the Deal and more often the Unraveling of the Deal. The unraveling was often right before your eyes, a Trump rally on continuous loop. There was no way not to look.”

And there are so many glaring examples of the above passage in the book, as Woodward offers a behind-the-scenes look at how Donald Trump is president in his own unique, improvisational way.

First, there’s how 2016 campaign manager and later chief strategist Steve Bannon achingly wanted to pull the strings and be the real power behind President Trump, only to be stopped by First Daughter Ivanka (no matter how many times she adamantly insisted to Bannon that she was not merely a White House staffer); there’s former high level staffers Reince Priebus, Gary Cohn and Rob Porter, who represented rare examples of rationality and procedure in the Oval Office by preparing thorough briefs and reports on a number of salient issues that merited Trump’s attention, only to have them totally ignored or paid lip service at best by the president; there’s Trump’s rather unorthodox presidential work ethic, in which he didn’t arrive at the Oval Office until 11 a.m., and was prescribed “executive time” to help him fulfill his daily presidential duties (which comprised mainly of watching several cable news broadcasts and making constant phone calls to friends and allies.

…And the list just goes as he rather dodges his way through a number of issues and matters during those first 18 months, such as the Mueller investigation, his relations with Russia and North Korea, the American military presence in South Korea and the Middle East, the Charlottesville riot, and his attempts to repeal and replace Obamacare (aka the Affordable Health Care Act).

There is no way for the reader to even suggest that Fear is attached with a personal agenda for Bob Woodward. Basically, he continues the journalistic tradition that he established over 40 years ago when he and fellow Washington Post reporter Carl Bernstein collaborated together to break the Watergate Scandal that led to the resignation of Richard Nixon in 1974 (and evolved into two monumental best selling books, All the President’s Men and The Final Days). With subsequent books on the presidential administrations from Reagan through Obama, Bob Woodward has become the authoritative, objective voice into what really goes on within the corridors of power in the White House, and the characteristics of the President of the United States and his main power players who made their respective administrations tick.

And the story of the Trump presidency is not over, yet. With continuing issues and controversies, that could easily bring down any mortal presidency in flames, such as the migration caravan, the caging and separation of illegal immigrant families, the move to abolish birthright citizenship, the mailing of pipe bombs to Trump opponents, the shooting at the Tree of Life Synagogue in Pittsburgh and the turbulent 2018 midterm elections, Woodward will be busy once again telling the inside story of life in the Trump White House, whether through an expanded paperback edition next year, or a totally new separate volume (called, maybe More Fear?!?).