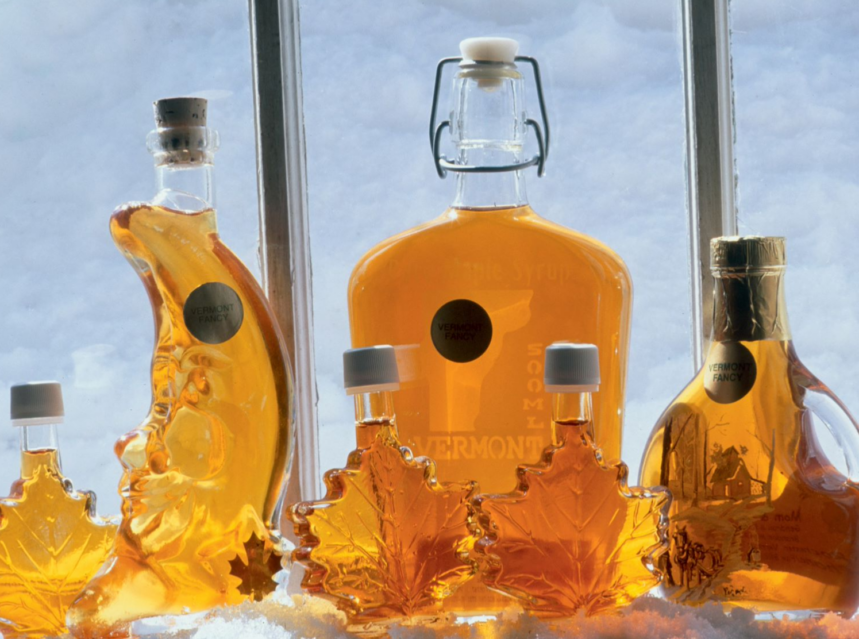 Now that you have stockpiled some delicious Canadian maple syrup, you may be looking for some recipes and ingenious ways to use it—other than putting it on pancakes. We’ve found two maple syrup-themed cookbooks that are must-haves for your cookbook collection!

Nothing tastes as good as maple syrup poured over a stack of steaming hot pancakes! syrup is one of those coveted ingredients to always have on hand. Pure maple syrup adds a unique sweetness and depth of flavour to baked goods, but can also be used to enhance salad dressings, soups and main courses. Ken Haedrich illustrates the versatility of maple syrup in his wildly popular Maple Syrup Cookbook, now in its 3rd edition with over 113,000 copies sold!

The book begins with chapters on maple syrup know-how including the history of sugaring, modern maple production, grading and tasting. Then straight into the recipes with chapters entitled “Maple Mornings, Beyond Breakfast and Maple Sweets. Start the day with Classic Pancakes made with whole wheat flour and cornmeal, or Maple French Toast.

Maple Bran Muffins make a great snack, while decadent Maple Sticky Buns sound just right for afternoon break. Your family will love main dishes like Maple-Glazed Chicken Wings, Crispy Maple Spareribs or Salmon with Mango Salsa, while Maple Balsamic Dressing brings out the flavours of a salad with some fruit in the ingredients. For dessert—Carrot Cake with Cream Cheese Icing (with maple syrup of course.)

Ken Haedrich’s Maple Syrup Cookbook is one sweet book to ramp up any meal of the day!

Maple Sugar; From Sap to Syrup, the History, Lore and How-to Behind This Sweet Treat

Did you know that it takes 40 gallons of sap to produce one gallon of maple syrup? It’s no wonder that real maple syrup is often referred to as “liquid gold”, treasured for its ability to transform just about anything into sweet goodness. The maple leaf officially appeared on the Canadian flag on February 2, 1965. The maple leaf was also on every Canadian coin between 1876 to 1901 but remained only on the penny—until we did away with those of course. These are just a few of the tidbits of maple trivia found in Tim Herd’s Maple Syrup.

This book would make a great gift for the maple syrup connoisseur or someone who makes their own maple syrup. Most of the book is dedicated to the history of maple syrup and detailed descriptions of the sugaring process, starting with an Abnaki legend on how maple sugar came to be to modern maple sugaring techniques.

Tim Herd is a naturalist and the executive director of a regional parks and open space commission in the Pocono Mountains, where maple trees are abundant. His knowledge of maple sugaring is also abundant, so whether you want to tap your own trees or just enjoy maple syrup at home, this book is for you.

Ontario is adding over 500 hospital beds for Critical Care