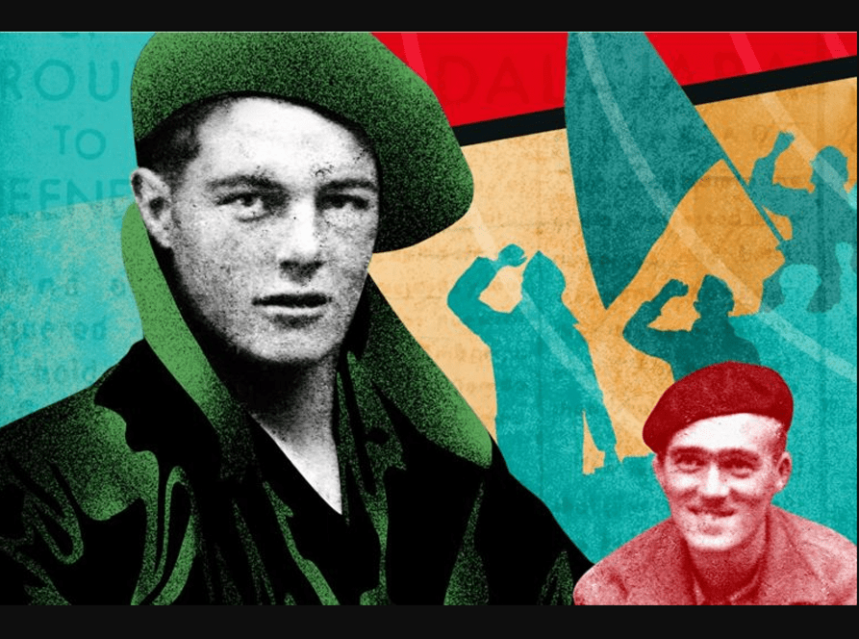 TORONTO, Sept. 27, 2022 – Harbourfront Centre has just announced that the North American debut of The Ballad of Johnny Longstaff opens this November. Performed and created by award-winning folk trio, The Young’uns. The Ballad of Johnny Longstaff is described as an extraordinary performance of a remarkable life. The show running at Harbourfront Centre Theatre November 16– 27, 2022, received five-star reviews from The Guardian and The Times when it originally opened in London’s West End.

Co-produced by Harbourfront Centre, The Young’uns and Northern Stage, and directed by Lorne Campbell, Artistic Director of National Theatre Wales, The Ballad of Johnny Longstaff features songs from the original album, stunning animation and the audio memoir excerpts of real-life freedom fighter Johnny Longstaff from the Imperial War Museum.

The one-hour and fifty-minute show takes the audience from the trials of unemployment and hardship in Stockton-on-Tees through the Hunger Marches of the 1930s, the Battle of Cable Street and fighting in the Spanish Civil War.

Performed by members of The Young’uns, Sean Cooney and David Eagle, along with Sam Carter, British guitarist, singer and songwriter, The Ballad of Johnny Longstaff is a poignant true story of one man’s journey from poverty to fighting fascism.

“We’re delighted to introduce this timely and at times hilarious musical adventure to Torontonians,” says Iris Nemani, Chief Programming Officer, Harbourfront Centre. “Johnny’s story is relevant now more than ever and is beautifully told through the gorgeous harmonies of the Young’uns and the voice of Johnny Longstaff himself. We couldn’t be more excited to be able to bring this internationally acclaimed story to local audiences.”

The origin of how The Ballad of Johnny Longstaff came to be is as entertaining as the story itself: Duncan Longstaff approached The Young’uns after a pub gig and asked them if they would like to write a song about his dad, Johnny. Given Johnny was from Stockton-on-Tees, just like the musical trio, it felt like a serendipitous fit. The band was quickly fascinated by Johnny’s adventurous life, so they agreed to use their voices to illustrate his miraculous story. The result was a new album, The Ballad of Johnny Longstaff, that became a resounding success, eventually evolving into a captivating play which has now made its way to Toronto.

The on-sale public date for The Ballad of Johnny Longstaff starts Wednesday, October 5, with a donor advance sale beginning on Thursday, September 29. Tickets range from $35–$79 and can be purchased online.

Harbourfront Centre is a leading international centre for contemporary arts, culture and ideas, and a registered, charitable not-for-profit cultural organization operating a 10-acre campus on Toronto’s central waterfront. Harbourfront Centre provides year-round programming 52 weeks a year, seven days a week, supporting a wide range of artists and communities. We inspire audiences and visitors with a breadth of bold, ambitious, and engaging experiences, and champion contemporary Canadian artists throughout their careers, presenting them alongside international artists, and fostering national and international artistic exchange between disciplines and cultures.

The Young’uns’ live shows are renowned rollercoaster rides. With heart-on-the-sleeve storytelling, beautiful lyrics, warm harmonies and relentless repartee, Sean Cooney, Michael Hughes and David Eagle (the award-winning stand-up comedian) write and sing folk songs for today. Born from empathy, crafted with care, fired by hope, and shared with joy, The Young’uns’ songs have been described as “a heartfelt secular hymnary for these troubled times and a rallying call for humanity.” (The Scotsman). They have led the band to three BBC Radio 2 Folk Awards (including Best Album in 2018 for Strangers) and the creation of the acclaimed international theatre show The Ballad of Johnny Longstaff (based on their 2019 album of the same name).

Northern Stage is a registered charity theatre which stretches from Tweed to Tyne to Tees, UK. It’s the largest producing theatre in the Northeast of England, with a regional and national sector support role. Backed up by industry-leading facilities and a dash of Geordie genius, we reach beyond the ordinary. A theatre where ideas meet and futures change, thousands come to create and share unique live experiences every year. It is so much more than a night out. Northern Stage believes in the social, emotional and political power of theatre to challenge the status quo.