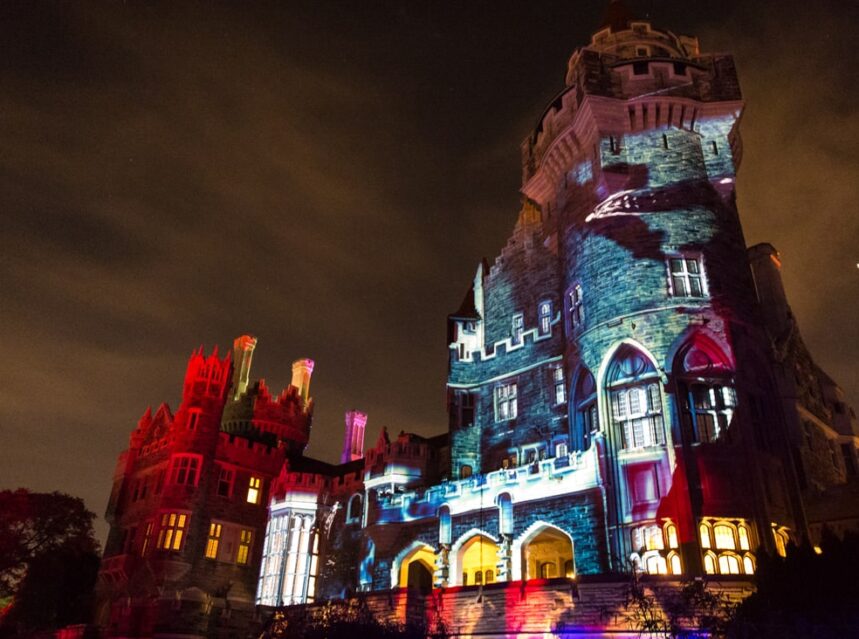 TORONTO, Sept. You’ll want to leave a light on… as Liberty Entertainment Group unveils the 2022 version of its macabre celebration of all things Halloween. Captain Morgan Presents Legends of Horror located on the grounds of Toronto’s celebrated historic castle, Casa Loma. The annual installation, now in its seventh sell-out year, opens September 30th – October 31st; tickets are on sale at the witching hour (midnight) on September 1st at www.casaloma.ca.

The immersive show is a theatrical interpretation of classic horror characters and décor known as promenade theatre, in which patrons wander at their own pace through a phantasmagorical set at dusk, interacting with a cast of ghoulish characters. The 2 km outdoor walking trail begins in the lower gardens on the Casa Loma property and winds through dimly lit tunnels to the deepest, darkest basement of the castle and under the street, to the historic – some say haunted – Stables on the property’s north end.

Not for the faint of heart, thrills, chills, terrors, and pop-ups will shock — culminating in dramatic lighting and 3D imagery projections, designed to awe. Each location introduces a ghostly new character and creepy scenario; the mist-shrouded castle itself lends an ambience of foreboding, while the show’s décor and elements are devised to give the audience a resounding night fright.

Liberty Group will once again activate the castle’s Glass Pavilion as the Captain Morgan Bar and Lounge, offering a much-needed respite midway through the show’s chills with a themed food and beverage program. The Bar affords unparalleled views of the creepy castle projections and entertainment designed to maximize the ultimate horror experience for all.

New this year is an immersive experience created in partnership with Secret City Adventures – overseers of the fan favourite, the Casa Loma Escape Series – called Zombie Apocalypse. Toronto’s newest and largest zombie themed haunted house invites patrons to enter the world of fictional pharmaceutical giant, Biolux and its new wonder drug: the Biolux Serum, a purported solution to aging and disease, which renders subjects into cannibalizing contagious zombies. Guests start in the unsettling Biolux showrooms, only to uncover grisly secrets in the Biolux labs, full of gruesome experiments and maniacal scientists; then, explore rooms and haunting displays in the survivor camps, as the last of humanity struggles in a doomed battle against the zombie apocalypse. Located in an abandoned facility south of historic Casa Loma at 175 Kendal Avenue (southeast corner of Kendal and Davenport Ave.) the 45-minute activation featuring live actors promises to take the fear factor to the next level. The event runs from October 13th – November 5th from 6pm – 11pm.

“As summer winds down and the city’s thoughts turn to fall, we’re excited to announce the return of the very best seasonal event in town,” said Nick Di Donato, president & CEO, Liberty Entertainment Group. “The team has been working on a thrilling Halloween program for months and we cannot wait to unleash the demons and zombies on Toronto audiences of all ages, who have made this a sell-out event every year.”

“Our guests will discover some chilling new surprises in the 2022 production of Legends and Zombie Apocalypse,” added Nadia Di Donato, vice president, creative director, Liberty Entertainment Group. “We have scoured the globe for the most terrifying new creative elements and the production teams have outdone themselves this year. We expect the shows will mesmerize Halloween’s biggest fans, with the promise that no two visitor experiences will be alike,” she added. “We dare you to not be amazed… be very afraid!”

FAMILY HOURS (no actors) 5pm – 6.30pm
September 30th to October 12th $35 online | $40 onsite
October 13th to October 31st $45 online | $50 onsite
FAMILY HOURS are designed for families with younger children to be less frightening and run earlier in the evening when less dark. There are no live actors/characters.