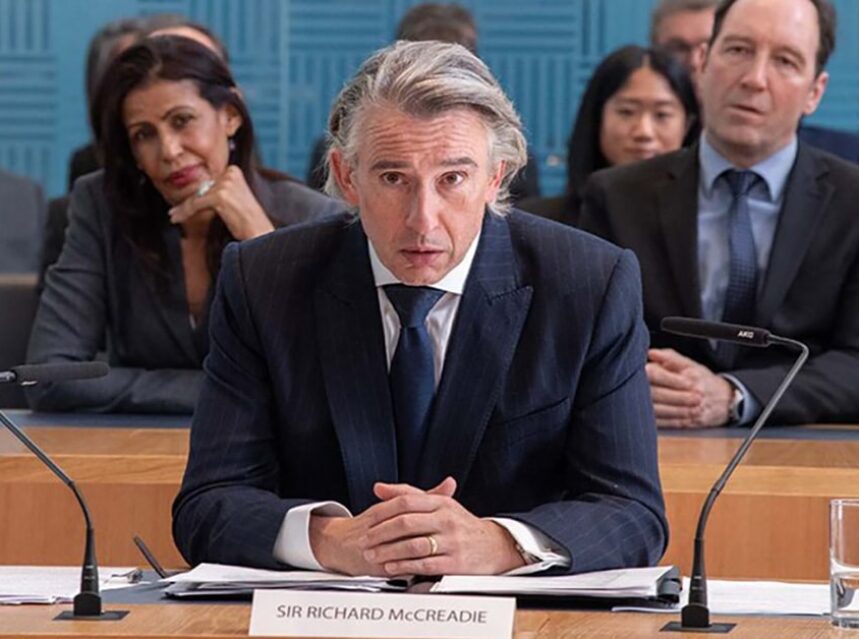 GREED movie review – “Money, money, money / Must be funny / In the rich man’s world…” Toward the end of this movie, we hear this famous tune by the iconic group Abba. Somehow, the song summarizes the main character’s personality, fashion tycoon Sir Richard McCreadie (Steve Coogan), whom we will see in three different moments.  At the beginning of the film, he appears celebrating the success of his fashion company which is delivering generous bonuses to its shareholders. Then we are giving a succinct, but illustrative and compelling view of McCreadie as an academically unsuccessful, yet resourceful young man who would soon start a meteoric career in the fashion industry. Amid his successes and excesses as a businessman, we also see him declaring before a committee of the British House of Commons. The committee is conducting an inquest into his company’s dubious business practices.

The focus of the movie however, is on the event that should take McCready away from the concerns arising from the official inquest and instead mark the highlight of his career, not only as a billionaire but also as a lover, now enjoying the company of the beautiful –and younger– Naomi (Shanina Shaik).  However, he is still in good terms with his business partner and former wife Samantha (Isle Fisher), also attending the big party. The event is McCreadie’s 60th birthday for which he has invited several celebrities to the Greek island of Mykonos. For the occasion, McCreadie has decided to stage a Roman-style spectacle in which he will play the emperor. An ancient makeshift circus is being built, a lion has also been brought to take part in what is expected to be a gladiators’ display.

Not everything is going the way McCreadie has planned though: on the beach next to the hotel, a group of Syrian refugees have installed their tents. This is a sight that doesn’t go well with the festive ambience. However, the beaches in Greece are public, and therefore the refugees cannot be removed. Nevertheless, McCreadie would find a way to incorporate the asylum-seekers as part of the show. In essence, they will be playing the role of slaves, for which he will supply the costumes. After all, what would a big Roman-style party be without gladiators and slaves, as Amanda (Dinita Gohil), a company employee, would say. The entrepreneur is indeed very ingenious, as Nick (David Mitchell), his biographer, will record in his account of McCreadie’s life.

“Greed,” directed by Michael Winterbottom, who also wrote it with additional material by Sean Gray, delivers with delightful British black humour, a powerful indictment of the practices of big corporations.  In this case, those in the lucrative fashion business, especially since the introduction of extreme neoliberal policies by Margaret Thatcher. The dismantling of the local British industry by moving production to Sri Lanka and other Asian countries where workers –mostly women– are paid a fraction of their British counterparts, allows the making of fabulous fortunes like McCreadie’s. I strongly recommend this film, it is funny, while at the same time it delivers a thought-provoking story. Running time: 104 min.

Feature image: Sir Richard McCreadie (Steve Coogan) has to testify before an inquiry committee of the British House of Commons. His business practices are under scrutiny

Other movie reviews from mtltimes.ca and totimes.ca