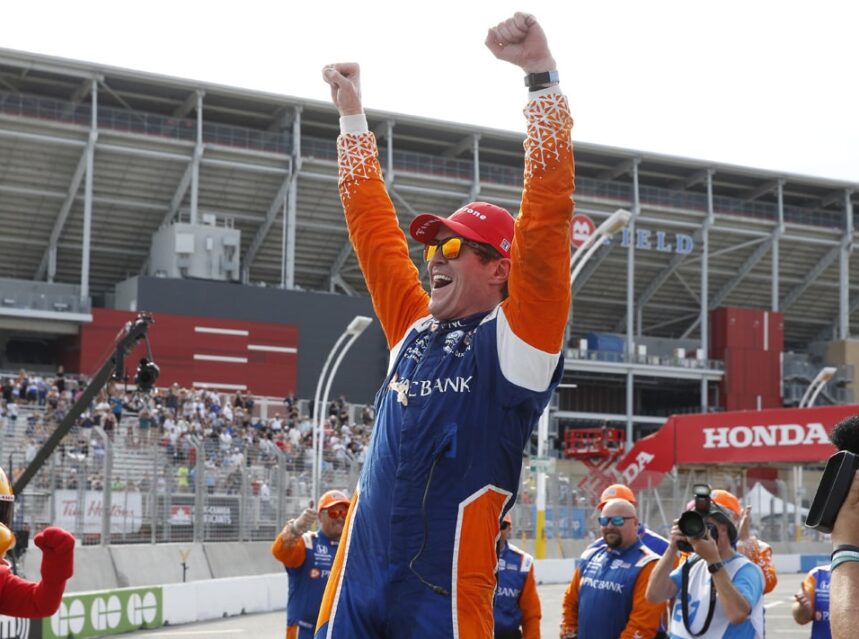 TORONTO (Sunday, July 17, 2022) – The drought finally is over for Scott Dixon as the six-time NTT INDYCAR SERIES champion just won the Honda Toronto Indy. Dixon earned just his first victory since May 2021 at Texas Motor Speedway – a span of 23 races, the second-longest winless streak of his illustrious career – by capturing the Honda Indy Toronto on Sunday. Dixon drove his No. 9 PNC Bank Chip Ganassi Racing Honda to a victory by .8106 of a second over Colton Herta in the No. 26 Gainbridge Honda.

The victory also was the 52nd of Dixon’s career, tying him with fellow legend Mario Andretti for No. 2 on the all-time INDYCAR SERIES win list. A.J. Foyt leads with 67 wins. Dixon’s fourth career Toronto victory extended his record to 18 consecutive INDYCAR SERIES seasons with at least one win, and he also has won a race in a record 20 seasons overall.

“Ended a streak there, which is fantastic,” Dixon said. “Just so happy for the team. A crazy year for the 9. The PNC Bank No. 9 back in winner’s circle. It just feels so good.

“To be close to Mario, every time I’m asked these questions, I’m just so thankful that we still have A.J. and him in the pits. We get to see them; we get to talk to them. It’s just fantastic. It’s huge, man. I just feel so lucky to be a part of this group.”

Felix Rosenqvist finished third in the No. 7 Arrow McLaren SP Chevrolet to earn his first podium result since his sole career INDYCAR SERIES victory in July 2020 at Road America.

Ericsson expanded his lead from 20 to 35 points over second-place Will Power in the series standings. Power finished 15th after starting 16th in the No. 12 Verizon Team Penske Chevrolet.

Dixon is fifth in the standings, 44 points behind his Chip Ganassi Racing teammate Ericsson. Dixon would tie Foyt as the all-time championship winner in INDYCAR SERIES history with a seventh title.

“Hopefully we’re kind of in the title hunt now,” Dixon said. “I’m hoping this is the start of the roll. I know the team definitely deserves it.”

Dixon, who started second, used canny strategy from his pit box earlier in the race to take the lead for the first time on Lap 32 of the 85-lap race.

That move prompted Andretti Autosport to call Herta to the pits for an identical tire change on Lap 18, and Dixon – on hot primary tires – passed Herta and his cold primary tires on track during Herta’s out lap after his pit stop. That overtaking maneuver proved decisive, and Dixon circulated to the front on Lap 32 when Pato O’Ward surrendered the lead after finally making his first pit stop in the No. 5 Arrow McLaren SP Chevrolet.

“We struggled a little bit on reds,” Dixon said of the Firestone alternate tires. “We made some adjustments after this morning (based) on some of the different tracks that we’ve been throughout the year. We had fought with understeer, and that definitely wasn’t the case today. It was a tough drive, man.”

The race was remarkably clean for the first 44 laps, with just one caution for two laps in the opening laps after contact damaged the No. 51 Deloitte Honda of Takuma Sato. But the treacherous, bumpy circuit with its unforgiving walls spawned three caution periods between Laps 45 and 60, giving Herta and others a chance to jump Dixon on a restart.

But Dixon held firm and assumed the lead for good under caution on Lap 61 when an off-sequence Rinus VeeKay pitted from the front in the No. 21 Bitcoin Racing Team with BitNile Chevrolet. Dixon led a race-high 40 of the 85 laps, with VeeKay second with 18 laps in front.

Herta couldn’t get past Dixon on the final restart of the race on Lap 66. Then Herta focused on his mirrors and resisted intense pressure from behind from Rosenqvist, prevailing for second over the Swede by .5384 of a second at the finish.

“Felix was really fast, and I’m glad we were able to keep him behind us,” Herta said. “He looked like a few more laps, and he was going to get us. We struggled a little bit with tire wear at the end, but other than that, our car was amazing.”

Dixon will split $10,000 with his team and a charity of his choice for the victory as part of the PeopleReady Force for Good Challenge.

The crucial run of five NTT INDYCAR SERIES races in four weeks continues with the Hy-Vee INDYCAR Race Weekend this Friday through Sunday at Iowa Speedway, featuring a doubleheader on the .875-mile oval. The Hy-VeeDeals.com 250 presented by DoorDash is scheduled for 4 p.m. (ET) Saturday (NBC/INDYCAR Radio Network), with the Hy-Vee Salute to Farmers 300 presented by Google at 3 p.m. (ET) Sunday (NBC/INDYCAR Radio Network).