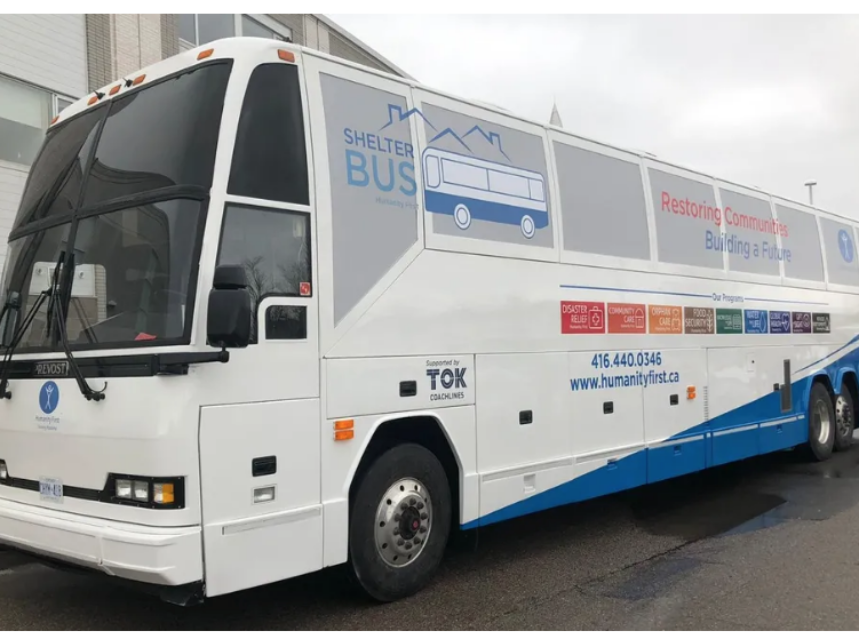 To help address the issue of Toronto’s growing homeless population especially during the colder months when sleeping outside can be fatal, a joint initiative between Humanity First and Ahmadiyya Muslim Youth Association is bringing a Shelter Bus to Toronto.

To help alleviate this issue, and ease the burden on homeless shelters, the Humanity First Shelter Bus project is underway and will continue for the next three months.

“The vehicle will operate in the Greater Toronto Area during the cold winter months. During off-periods it will be used for training, and off-site fundraising events,” explains Naeem Farooqi on Linked In. Farooqi is Director of Fundraising and Shelter Bus for Humanity First.

The Shelter Bus is a repurposed coach bus, (see the transformation here) optimised to provide a safe, comfortable place to sleep overnight. It is outfitted with 20 beds, a kitchenette, lounge space, secure storage, bathrooms and wifi. A joint initiative between Ahmadiyya Muslim Youth Association and Humanity First, the Shelter Bus will visit specific areas around the city where homelessness is most prevalent to provide shelter and hot meals.

The bus will operate overnight from 8 pm to 8 am with a volunteer driver and caretakers. These volunteers will engage with those in need of the shelter bus service and distribute care packages to each user (ex. Warm socks, toothbrush and other necessities). The shelter bus also hopes to coordinate with other local homeless shelters in the GTA to help relieve their excess demand.

There are over 9,200 people in Toronto who are homeless on any given night according to Fred Victor social service charitable organisation. The homeless are often victims of violence, suffer from poor health and nutrition, and a higher incidence of suicide. Children, youth, Aboriginal people, new immigrants, and refugees make up the segment experiencing the greatest growth.

How you can help the Shelter Bus program

Humanity First is running a Kits for a Cause campaign where you can donate specific needed items like shelter kits specifically for men and women, children or winter warmth kits. Visit their site and fill out a form to provide Kits for a Cause.

Hopefully this forward thinking initiative will inspire a national, if not worldwide movement to help get the homeless out of bus shelters and into Shelter Buses when they seek refuge.

The Ahmadiyya Muslim Youth Association (AMYA) is a nationwide youth group that works with young Muslim men and boys around the country. The association is also known internationally by the name Majlis Khuddamul Ahmadiyya, which literally means “Association of Servants of the True Islam.”

Humanity First is a humanitarian relief organisation registered in 50 countries across 6 continents, and has been working on human development projects and responding to disasters since 1995. Based in Vaughan, Ontario, Humanity First Canada is an international non-profit volunteer based charitable organisation providing relief and assistance to the less fortunate in Canada and across the globe to alleviate poverty and improve their quality of life. Humanity First is also in forefront of assisting, sponsoring and resettling refugees in Canada.

Humanity First also provides humanitarian aid to those affected by natural disasters and undertakes emergency relief operations around the world providing medical assistance, shelter, water, food, clothing and sanitation to affected populations. These have included the earthquakes in Haiti, Turkey, Pakistan, Japan and Iran, floods in Africa and Latin America, storms and tsunamis in the USA, Indonesia and Bangladesh, and conflicts in Eastern Europe.

Humanity First has raised tens of millions of dollars with over 93% of donated funds spent directly on serving humanity and less than 7% going towards administrative costs & fundraising efforts. With the majority of our team (including skilled engineers & physicians) being volunteers along with preferential rates for materials benefiting from global sourcing, Humanity First is able to deliver the aid worth of many times the value of donations provided.

Humanity First Canada is governed by a Board of Directors consisting of 5 members and is regulated by Canadian incorporation by-laws. With over 1,200 team members & volunteers, operations are administered and executed by executive directors, project coordinators and volunteers who are all Canadian citizens and are professionals from various walks of life.

Here are the winning Lotto Max numbers for Tuesday September 14, 2021 and other OLG lottery results