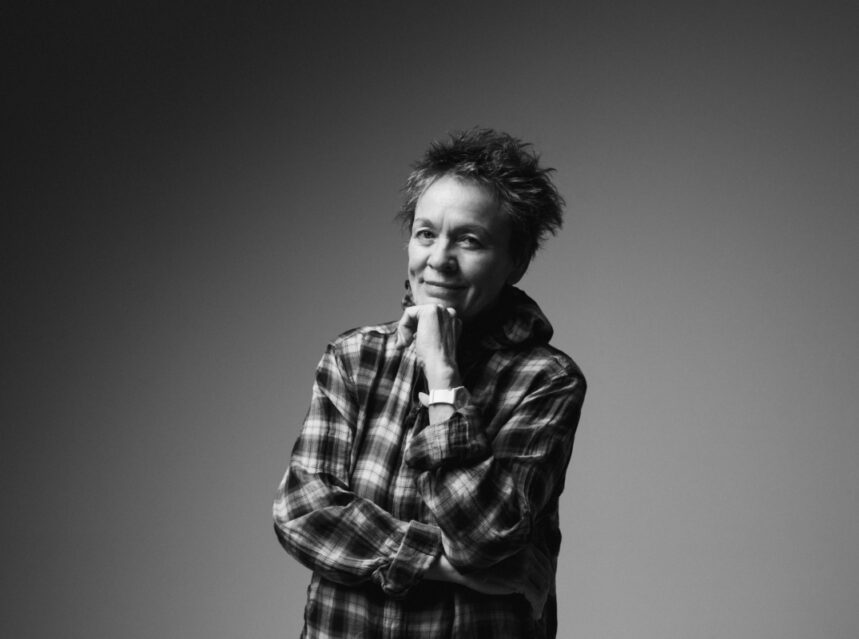 Fans of celebrated avant-garde artist Laurie Anderson can rejoice as she delves into her 40-year career spanning music, performance art, virtual reality, and multimedia installations. In this rare public talk and performance at the Royal Ontario Museum, Laurie Anderson will present an intimate look at her work through her own words.

The lecture complements Laurie Anderson’s To The Moon, a 15-minute immersive VT experience taking place at the ROM from Saturday January 11-25. Laurie Anderson created this installation at the museum along with Taiwanese artist Hsin-Chien Huang.

Laurie Anderson is one of America’s most renowned and daring creative pioneers. Her brand of electronic music has been an inspiration for so many artists including Canada’s own Jane Siberry along with America’s Suzanne Vega and Iceland’s Bjork. Musically she is also aligned with Peter Gabriel, David Sylvian, Brian Eno, The Velvet Underground and numerous others.

Best known for her multimedia presentations, innovative use of technology and first-person style, she is a writer, director, visual artist and vocalist who has created groundbreaking works that span the worlds of art, theatre, and experimental music.

Her recording career, launched by groundbreaking space age tune “O Superman” in 1981, includes many records released by Warner Records among them “Big Science” (1982), the soundtrack to her feature film “Home of the Brave”(1986) “Strange Angels” (1989) “Life on a String” (2001) “Homeland” (2008) and “Landfall” (2018) released on Nonesuch which recently won a Grammy Award in 2019 for Best Chamber Music/Small Ensemble Performance. And as mentioned Anderson will perform a concert in Toronto on January 18.

In 2002, Anderson was appointed the first artist-in-residence of NASA which culminated in her 2004 solo performance “The End of the Moon”, the second in a series of three “story” performances along with “Happiness” (2001) and “Dirtday” (2012) all of which toured extensively internationally.

Anderson has published eight books. Her most recent release – “All The Things I Lost In The Flood” (Rizzoli) – is a series of essays about pictures, language and codes. Anderson’s films include numerous music videos and installation works as well as “Home of the Brave” 1986 (included in Quinzaine des Réalisateurs) “Carmen” (1992), the high definition “Hidden Inside Mountains” (2005) and Arte-commissioned “Heart of a Dog” (2015) which was chosen as an official selection of the 2015 Venice and Toronto Film Festivals.

In 2017 Anderson joined four other artists in Mass MoCA’s Building 6 inaugurating a fifteen year rotating exhibition of work. Anderson will show pieces from her archive as well as new work. Included in the first exhibition cycle are her virtual reality collaborations with Hsin-Chien Huang “Chalkroom” and “Aloft”. “Chalkroom” has been featured in film festivals all over the world including the Venice Film Festival where it won the award for “Best VR Experience” under its Italian title “La Camera Insabbiata”. Along with their work “Aloft” and “To the Moon” it was presented at the 2019 Cannes Film Festival Directors’ Fortnight as “Go Where You Look!” Anderson will have a major exhibition of her work at the Hirshhorn Museum in Washington DC in 2020 and will be working with Hsin-Chien Huang on a major new piece for the Manchester International Festival.

ASL Interpretation will be provided.

The Eva Holtby Lecture is generously supported by the Holtby and Schury Families.

ROM Speaks is generously supported by The Schmidt Family.

IMPORTANT INFORMATION
Please note this experience is separately ticketed and does not include Museum admission. All participants (or parent/guardian is the participant is under the age of 18) must print and sign the waiver (PDF). Waiver must be presented upon check-in at the ROM.

Program participants must be 12 years of age or older. All participants under the age of 14 must be accompanied by a parent/guardian at all times while participating in this program.

About To the Moon

To the Moon uses images and tropes from Greek mythology, literature, science, sci-fi space movies and politics to create an imaginary and dark new moon. During the 15-minute VR experience, the viewer is shot out from Earth, walks on the surface of the moon, glides through space debris, flies through DNA skeletons and is lifted up the side and then tossed off of a lunar mountain. To the Moon is divided into scenes and allows the participant the choice of where and how to look. Scenes include:

Constellations: Featuring life forms that are becoming extinct, such as the a polar bear, and honeybee, this scene emphasizes the transitory as opposed to the fixed
DNA Museum: Viewers can fly through the skeletons of dinosaurs – made of DNA symbols – which morph into a Cadillac in a play on the history of fossil fuels
Technology Wasteland: The moon is imagined as a dystopic dumping ground for plastics and nuclear waste and viewers glide through this toxic scene with long scaly tentacles instead of arms
Stone Rose: Inspired by the rose in Le Petit Prince, is a fossil rose adrift in the universe as planets swirl around it
Snow Mountain: The viewer loses control and is swept to the top of a mountain. Inspired by the plot line of many space adventure movies, the viewer’s virtual body dramatically tumbles away into deep space.
Donkey Ride: The viewer trots along on the back of a donkey through the lunar landscape, eventually floating up and away into a universe of stars that begins to explode like fireworks