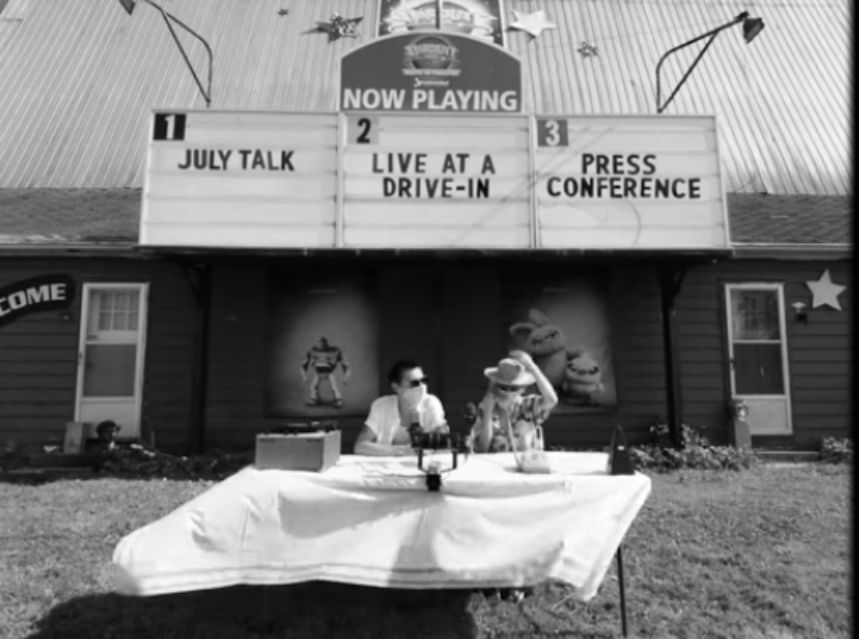 TORONTO, ON. July 14, 2020 — July Talk announce drive-in concert venue — Toronto rockers July Talk announced the venue for their live at the drive-in concert next month. They are planning to play live for two nights at a the Stardust drive-in movie theatre in Sharon, Ontario just north of Newmarket. Fans will actually be able to see and hear live humans as opposed to live streams on August 12th and 13th.

The Toronto band announced the shows on social media via a retro style drive-in theatre commercial, all in black and white in the same vein as their recent video releases for their new album release “Pray For It.”

The idea behind this first-of-its-kind drive-in setup is to ensure spectators are physically distanced to avoid the spread of COVID-19. The live mix will also be broadcast through your car radio, just like during a drive-in movie experience. The band will also premiere unreleased video content on the big screen, as well as a live camera feed and drone footage.

Rest assured, July Talk will also be playing a number of brand new tunes from their new album Pray for It which was released this month on the 10th of July. This is their third studio album release and the first since their 2016 album, Touch. Check out their first single, “Pay for It.”

“We’ve been working on this idea for some time now and it feels like it’s going to be a pretty special event,” the band said in a statement. “The thought that we will be able to perform and feel the audience’s company again is just too much, we can’t contain our excitement. We’re going to premiere some unreleased music videos and play a full scale 90-minute live set where the audio is broadcast onto your car radio and the drive-in screens play a live multi-camera feed as well! Car horn applause anyone?!”

And here is another single from the new album. It’s called “Governess Shadow.”

Also check out “Good Enough.” It walks the more mellow side of July Talk with beautifully soft ethereal lead vocals from Leah Fay, and hints at some similar rhythms to The Cure’s “Close To Me,” but that’s as far as the similarity goes.

The new album is available now in many forms but we like the vinyl edition. Pressed on 140g, 12″ vinyl, with printed dust sleeve and double sided 12×24″ lyric insert/poster. The vinyl edition includes digital download card.

Tickets for the two drive-in concerts go on sale at noon: Get Tickets.

More music news from TO Times…