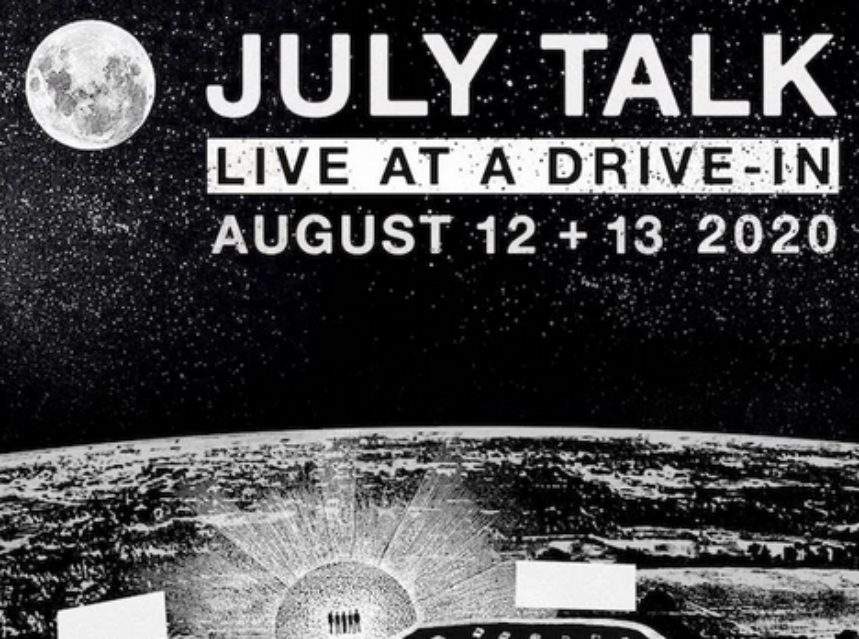 TORONTO, ON. May 14, 2020 — Toronto rockers July Talk are planning to play live for two nights at a local drive-in movie theatre yet to be determined. This is no joke. Fans will actually be able to see and hear live humans as opposed to live streams on August 12th and 13th.

The idea behind this first-of-its-kind drive-in setup is to ensure spectators are physically distanced to avoid the spread of COVID-19. The live mix will also be broadcast through your car radio, just like during a drive-in movie experience. The band will also premiere unreleased video content on the big screen, as well as a live camera feed.

Rest assured, July Talk will also be playing a number of brand new tunes from their new album Pray for It set to be released on the 10th of… (you guessed it)… July. It will be their third studio album release and the first since their 2016 album, Touch. Check out their first single, “Pay for It”:

“We’ve been working on this idea for some time now and it feels like it’s going to be a pretty special event,” the band said in a statement. “The thought that we will be able to perform and feel the audience’s company again is just too much, we can’t contain our excitement. We’re going to premiere some unreleased music videos and play a full scale 90-minute live set where the audio is broadcast onto your car radio and the drive-in screens play a live multi-camera feed as well! Car horn applause anyone?!”

So far there is now word yet on an opening act for this first of its kind Canadian concert. In terms of where you can buy tickets to this unprecedented Toronto concert event July Talk has yet to release any information but fans can sign up here to receive updates on the show.