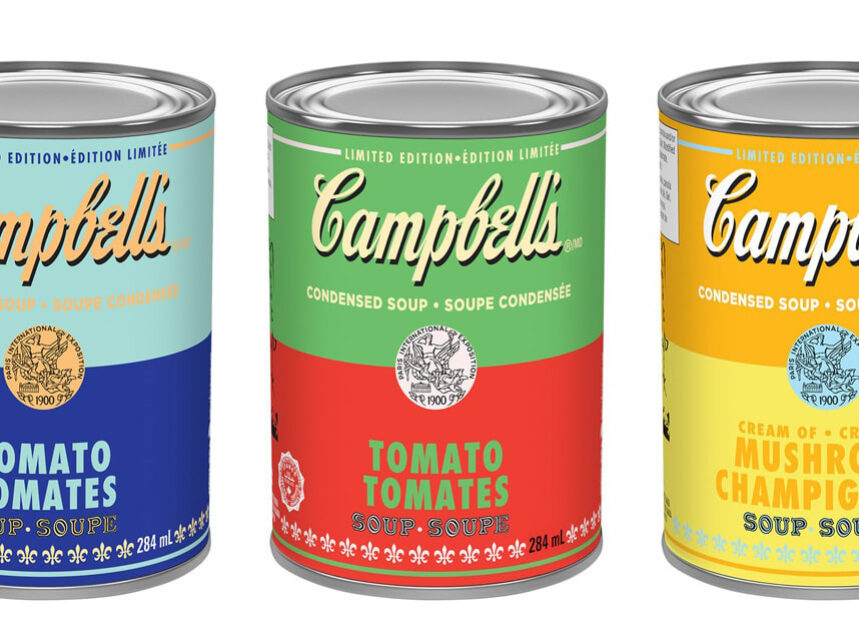 Art is best when it’s everywhere, for the world to enjoy and as Andy Warhol famously said, “Pop Art is for everyone”.  In the spirit of making art accessible to all and in celebration of Andy Warhol’s iconic relationship with Campbell’s soup, Campbell Canada has launched limited edition Andy Warhol inspired soup cans across Canada.

Andy Warhol famously believed that everyday items could be transformed into minimalist art works. Taking the essence of that philosophy and as an added visual element to this pop art collaboration, Campbell Canada has challenged several Canadian artists and influential content creators, to find colourful, everyday inspiration from the limited edition cans and produce their version of pop art-inspired content. Each creator will release their original pop art creations inspired by the cans on their social media channels this month with the hashtag #CampbellsxWarhol. A digital art gallery hosted by Refinery29 will be home to a selection of the unique works produced from the campaign.

“In 1962, Andy Warhol changed the trajectory of contemporary art by depicting Campbell’s soup cans on canvas,” said Michael Dayton Hermann, Director of Licensing, Marketing, and Sales at The Andy Warhol Foundation. “It is only fitting that we pay tribute to the enduring legacy of these two icons by coming full circle and bringing his art back to the Campbell soup cans that provided him with inspiration. We are proud to partner with Campbell Canada on this initiative as a natural extension of our ongoing relationship and we are pleased to see that younger artists and content creators continue to be inspired by his artworks.”

Warhol’s close connection to the Campbell’s brand is represented in his iconic pop art movement, often imitating real life, from consumer culture to mass media and, in this work, the widely enjoyed Campbell’s canned soup. The limited edition soup cans feature labels that reflect Warhol’s pop-art style and use eye-catching colour combinations such as pink, orange, red and yellow, a colour palette that can add an element of brightness.

“Campbell’s Condensed Soup and Andy Warhol’s artwork are inextricably linked in the history of pop art,” said Campbell Corporate Archivist Scott Hearn. “Warhol is said to have created his Campbell’s-inspired works because he enjoyed eating the soup every day. We hope this collaboration will bring that same joy to our consumers and spark inspiration in a new generation of artists.”

The four limited edition Campbell’s cans are available now at key retailers across the country and were produced under license from The Andy Warhol Foundation, a not-for-profit corporation that promotes the visual arts.

About Campbell Company of Canada
Campbell (NYSE:CPB) is driven and inspired by our Purpose, “Real food that matters for life’s moments.” For generations, people have trusted Campbell to provide authentic, flavourful and affordable snacks, soups and simple meals, and beverages. Founded in 1869, Campbell has a heritage of giving back and acting as a good steward of the planet’s natural resources. The company is a member of the Standard and Poor’s 500 and FTSE4Good Indexes. A subsidiary of Campbell Soup Company, Campbell Company of Canada has a long heritage of nourishing Canadians since 1930. For more information, visit www.campbellsoup.ca.

About The Andy Warhol Foundation for the Visual Arts, Inc.
As the preeminent American artist of the 20th century, Andy Warhol challenged the world to see art differently. Since its founding in 1987, in accordance with Warhol’s will, The Andy Warhol Foundation has established itself among the leading funders of contemporary art in the United States. The Foundation has distributed over $200,000,000 in cash grants which support the creation, presentation and documentation of contemporary visual arts, particularly work that is experimental, under-recognized or challenging in nature. The Foundation’s ongoing efforts to protect and enhance its founder’s creative legacy ensure that Warhol’s inventive, open-minded spirit will have a profound impact on the visual arts for generations to come. Proceeds the Foundation receives from licensing projects such as this contribute to the Foundation’s endowment from which these grants are distributed. For more information please visit www.warholfoundation.org.