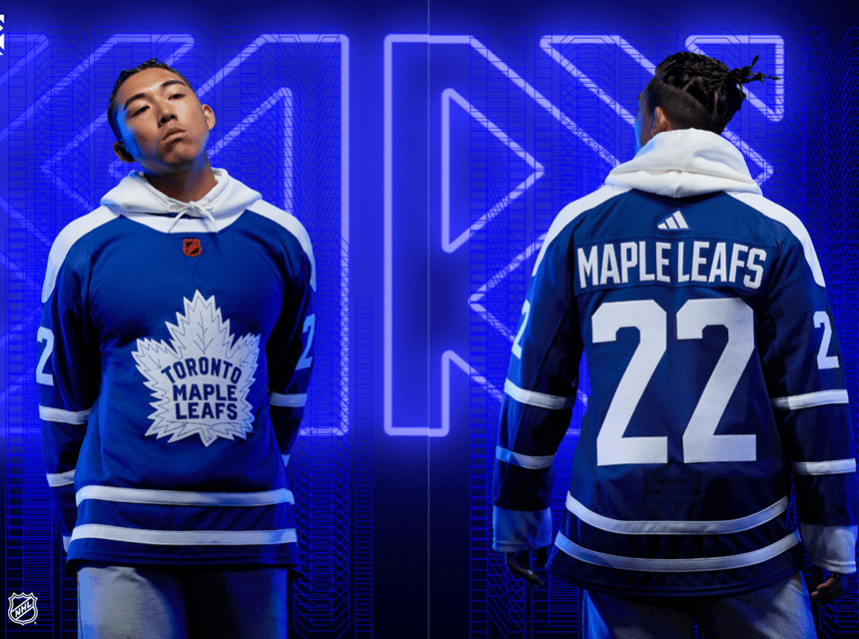 The NHL and adidas unveiled the 2022-23 season jerseys on Thursday, but they won’t be available to purchase for another few weeks. Each jersey includes the signature NHL Authentic Shield, showcasing the retro orange and black colours, while also displaying bold colour combinations and tributes from each club’s past.

Leafs fans need not bother looking up where to buy one of these unique jerseys until November 15 because that is when the Adidias Reverse Retro ADIZERO Authentic jerseys for all 32 NHL® teams become available to purchase for $190-$240 in the U.S. and $210-$260 in Canada exclusively at adidas.com, adidas.ca, NHLShop.com, NHLShop.ca and team stores, with wider availability at additional retailers starting Nov. 20.

Brian Jennings, chief brand officer and senior executive vice president at the NHL, said each club will wear their Reverse Retro jersey a minimum of two times and a maximum of eight. The new drop comes two years after the NHL released the first-ever Reverse Retro alternate jersey line.

“There’s the design process, then the procurement of all the materials and then production,” Jennings said. “When we were winding down the initial 1.0 drop of Reverse Retro jerseys, we were already starting to think about the iterations for this drop.”

The project is too big of an undertaking to produce yearly, but Jennings wanted fans to have another Reverse Retro jersey collection quickly. All jerseys took 18-24 months to produce, and Jennings credits the adidas design team for their haste with the process.

“Throughout this process, some jerseys arrive on one day and others the next, and it feels like you’re a child during the holidays ripping open the boxes.”

Now, all jerseys are finalized and ready to be worn by fans and players alike.

The adidas Reverse Retro ADIZERO Authentic jerseys for all 32 NHL® teams are available Nov. 15 for $190-$240 in the U.S. and $210-$260 in Canada exclusively at adidas.com, adidas.ca, NHLShop.com, NHLShop.ca and team stores, with wider availability at additional retailers starting Nov. 20.

“It’s really emotional,” Jennings said. “It’s been a long process, but when we see the fan responses, that’s the most rewarding part about the job.”

Our Toronto Maple Leafs are honouring their 1961-62 Stanley Cup-winning uniform, with their reverse retro jersey. Aside from sticking with the somewhat larger size crest of the 2020 edition the 2022 Maple Leafs revers retro jersey is entirely different. The crest is recreated with vintage, single-needle stitching. A new, narrow shoulder yoke with pointed seam construction was specifically created to match the original sweater from the 1962 Stanley Cup Champions.

Here is a look at what went into each of the 32 team’s NHL revers retro jersey designs:

Arizona Coyotes: The Coyotes are the first team to ever wear a jersey featuring the earth-tone colour sienna. Inspired by the Coyotes’ 1998-2003 third uniform, this jersey depicts a desert and incorporates the Coyotes crescent moon logo as part of the landscape.

Boston Bruins: Inspired by the Bruins’ 1995 third jersey that was originally gold, this bright white jersey’s main character is the Bruin itself. Legend has it that the image of the Bruin was taken from a painting of a bear hanging on a team executive’s wall and is why it resembles a painted image instead of a digital one.

Buffalo Sabres: The Sabres uniform blends the style of the 1996 logo with the colours of today. The body stripes and horn-shaped outline on the upper arm compliment the centre crest, the bison/buffalo.

Calgary Flames: The Flames crest is placed on a thick, diagonal-striped pedestal in this jersey, which is an ode to Calgary’s 1995 uniform. The player name and number are italicized to match the forward movement of the Flames “C” crest.

Carolina Hurricanes: The team’s current away jersey gets redesigned in a bold red for the first time in franchise history. There are two sets of hurricane warning flags on the shoulders and the “CANES” stairstep centre crest to underscore the flag details.

Chicago Blackhawks: The 1983 Chicago uniform takes on a literal interpretation of “Reverse Retro.” The black and red colours are inverted with the “CHICAGO” wordmark, inspired by the 2019 Winter Classic crest, laying across the chest.

Dallas Stars: The Stars modernize the team’s inaugural season uniform with its current colour palette. The “STARS” word and logo blend into one as the shoulder patches include images of the state of Texas with a “D” marking the location of Dallas.

Edmonton Oilers: The Oilers’ first third jersey assumes a modern orange and navy twist. Front and centre is an oil drop, surrounded by dynamic gear, with each bolt hub representing one of the team’s five Stanley Cup championships.

Florida Panthers: Once on the shoulder of the 1998 jersey, the iconic sun, palm tree and stick logo was moved to centerstage of the Panthers’ 2022 jersey. The light blue colour was derived from the team’s 2009 third jersey and is paired with its current primary colours of navy, yellow and red.

Los Angeles Kings: The Kings honour the 1982 uniform celebrating one of the greatest NHL comebacks ever, the “Miracle on Manchester.” The white jersey features purple and gold trims with a royal crown crest sewn with raised gems and a satin stitch embroidery.

Montreal Canadiens: The Canadiens’ 1979 uniform, from when the team won its 22nd Stanley Cup title, comes back to life in a new shade of light blue, inspired by the city of Montreal’s colors.

Nashville Predators: This uniform will feature Predators gold from head to toe, including the helmet, pant and socks, complimented by navy and silver accents. The jersey brings back the fanged Pred head crest from the team’s 2001 original third jersey.

New Jersey Devils: Paying homage to the team’s past as the Colorado Rockies and future as the New Jersey Devils, the newest sweater combines the inaugural 1982 Devils jersey with former Rockies colours.

New York Islanders: The Islanders ring in their 50th season with an ode to their 1995 uniform. The Fisherman returns on the centre crest with raised embroidery details of the Fisherman hat, beard and hands with teal accents in the waves. The head-to-toe navy colour scheme is complimented by orange and white angled trims.

New York Rangers: The Lady Liberty jersey returns in the Rangers’ present color palette. The shoulder patches and crest tie back to the original jersey while white and silver details create a glistening appearance around the historic New York statue.

Ottawa Senators: With the 2006 Centurion primary logo on the shoulder patches and the current primary logo on the center crest, the Senators jersey fuses eras to celebrate the uniform of their historic 2006-07 run to the Stanley Cup Final. The original version of this jersey was the team’s first third jersey in 1997, which featured less curved stripes and adornments.

Philadelphia Flyers: Revisiting their years as repeat Cup champions (1973-74, 1974-75), the Flyers jersey is nearly all white and black with orange accents. It features a thin black outline surrounding the crest to match the one worn in 1974.

Pittsburgh Penguins: The streamlined Penguins jersey, worn by Mario Lemieux and Jaromir Jagr throughout most of their 1990s run together, resurfaces with additional gold and white stripe accents on the sleeve. The Penguin crest has dimensional embroidery raising the shadow of the Penguin head and wings.

Seattle Kraken: In their sophomore season, the Kraken highlight the team’s sea green colour in the body of the jersey. Below it, the “S” crest is submerged in the navy-striped sea, where the Kraken’s red eye peeks just above surface.

St. Louis Blues: The Blues honour their inaugural jersey presented in 1966, which was a prototype worn by the ownership of the club a year before the team hit the ice. The gold and blue pairing is inspired by the Blues’ third jersey and other vintage uniforms, including the 2017 and 2022 Winter Classic jerseys.

Tampa Bay Lightning: This jersey features rain, sea and lightning sublimated in full-size graphics across the jersey, with lightning bolts down the side of the pants. It pays homage to their original 1997 storm third jersey with an electric-styled font.

Vancouver Canucks: Inspired by the Canucks’ 1962 uniform of the former Western Hockey League, the Reverse Retro jersey features a recreation of the 1960s Johnny Canuck icon on the centre crest. Matching the original jersey, player numbers appear on the left chest and right shoulder only.

Vegas Golden Knights: The Golden Knights created a jersey whose design imagines what a Golden Knights third jersey might have looked like in 1995. It features a “VEGAS” diagonal wordmark and glitzy font, inspired by vintage hotel signage on the Las Vegas Strip.

Washington Capitals: The Screaming Eagle makes a comeback against an all-black colourway in the Capitals’ new jersey. Asymmetrical striping, unconventional font and new blue and copper colours were influenced by the 2005 uniform.

Winnipeg Jets: The Jets ditch the red in their new jersey, highlighting royal blue and featuring a bright white colour base. The 2022 Reverse Retro jersey design was prompted by the 1990 jersey, the inaugural year of the uniform worn by Teemu Selanne when he broke the rookie goal scoring record in 1992-93.