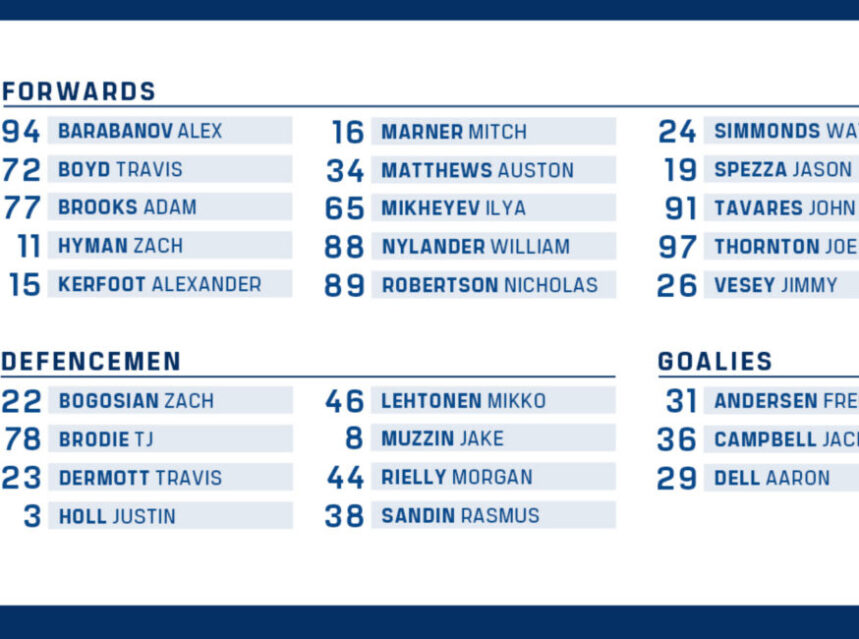 The Toronto Maple Leafs announced Monday that the team has trimmed their training camp roster to 26 players. The Leafs’ current roster includes a total of 15 forwards, eight defencemen and three goaltenders.

This means the team needs to trim just six more players before announcing its starting lineup for the season opener against the Habs on Wednesday night at Scotiabank Arena. The team is only allowed to dress 20 players for each game, as part of its 23-player active roster. But under the new COVID-19 protocols each team is also allowed to keep a taxi squad of four to six additional players.

With that being said, the Maple Leafs announced the following players have been loaned to the Toronto Marlies or placed on waivers for the purposes of being loaned to the Marlies: Kenny Agostino, Joey Anderson, Justin Brazeau, Rourke Chartier, Pierre Engvall, Tyler Gaudet, Mac Hollowell, Michael Hutchinson, Teemu Kivihalme, Timothy Liljegren, Martin Marincin, Nic Petan, Calle Rosen and Scott Sabourin.

The Maple Leafs will open their regular season schedule on Wednesday, January 13 at Scotiabank Arena in Toronto when they take on the Montreal Canadiens at 7 p.m.

NHL teams are only allowed to dress a maximum of 20 players – 18 skaters and two goaltenders – for any given game, but those 20 must come from the 23-player active roster. Both the 23-player active roster and 20-player game roster can change day-to-day and game-to-game. Each team will also be allowed to carry between four and six additional players (commonly referred to as a “taxi squad”) that will travel and practice with the team in case lineup spots are vacated due to COVID-19 protocols.

On opening night, Auston Matthews has a change to become the first player in NHL history to begin his career by scoring in his team’s season-opening game in five straight campaigns.