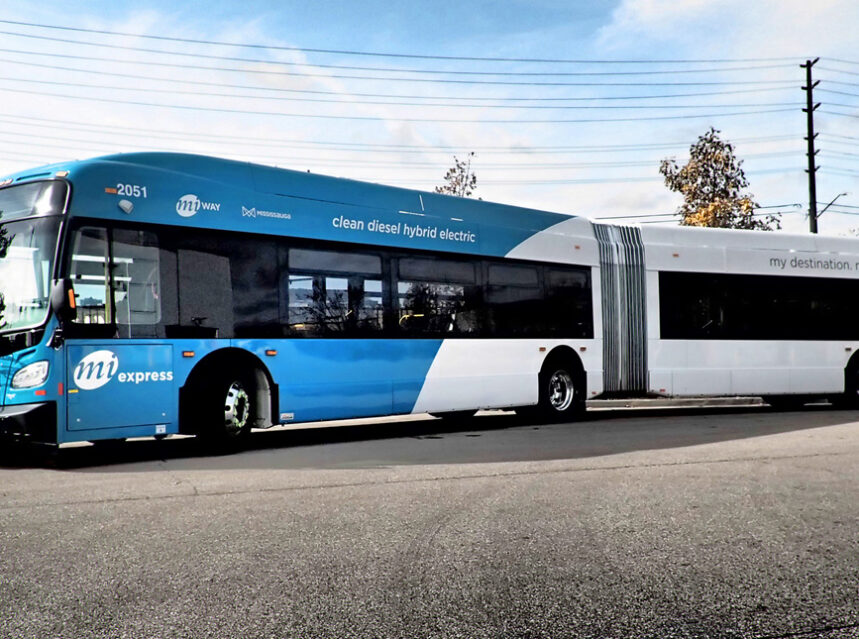 MISSISSAUGA, ON., Oct. 30, 2020 — Today, MiWay announced the introduction of 11 new, second-generation 60-foot hybrid-electric buses that are convertible to full battery power, helping to reduce the environmental impacts of public transit – advancing the City of Mississauga’s commitment to zero-emission buses in its fleet.

These are the first buses of its kind in Ontario and the third in Canada.

“Climate change is here and we know it’s affecting Mississauga, so we have to continue to take action,” said Mayor Bonnie Crombie. “Mississauga is working to become a climate-change leader, and greening our fleet is an important step in the evolution of our transit system, while reducing our carbon footprint. We know that this new fleet will help move us forward on this urgent City priority.”

In October 2019, MiWay received its first 10 second-generation buses. These buses were smaller in length (40 feet) and currently travel on MiWay’s local routes. The new 60-foot buses will be dedicated to MiWay’s express routes. Differing features include design and onboard systems and having potential of similar fuel savings and greenhouse gas (GHG) reductions as the 2019 buses.

“These buses help position Mississauga on the “green” road to electrification and adds to MiWay’s 2019 fleet which we continue to monitor and validate fuel savings and GHG reductions since being in service,” said Geoff Marinoff, Director, Transit. “These 60 foot models are the first in Ontario – no one else in Canada has them except Quebec and British Columbia. We know they are more fuel-efficient and can potentially at mid-life, be converted to run on full battery power further reducing greenhouse gas emissions, helping to combat climate change one step at a time.”

Increased green benefits and cost savings
· Start-stop engine technology that shuts down the engine while stopped at bus stops and automatically restarts when the brake is released – achieving up to 25 per cent fuel savings than conventional diesel-powered buses.
· Reduced number of drive belts from four to one, reducing the potential of breakdowns on the road and lowering overall maintenance costs.
· All electrically powered sub systems such as power steering, HVAC, passenger door operation and air brake compressor.

Increased safety
· Three additional external cameras that provide external rear-views along both sides and rear of the bus.

Enhanced mechanical features
· All-drive control mechanisms and battery storage systems that are mounted on the roof.
· “Plug and play” components, helping to simplify the maintenance process.

“The City’s first Climate Change Action Plan was approved in December 2019 and identifies actions over the next 10 years to be taken by the City as a corporation, as well as actions for the community – those who live, work and play in Mississauga,” said Jodi Robillos, Director, Parks, Forestry & Environment. “Advancing sustainable transportation is an important priority outlined in our Plan – the purchase of these new hybrid-electric buses helps to advance this. Together, we all have a role to play in tackling climate change and helping the City adapt to a changing climate.”

The new buses are expected to be ready for on-street service in early 2021. To learn more, visit miway.ca.