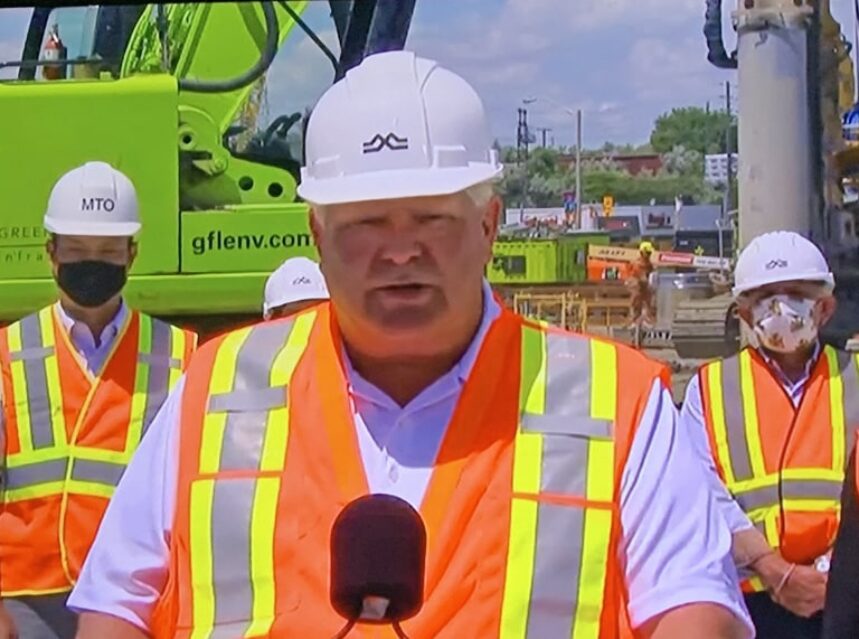 TORONTO, ON., June 23, 2021 ― The Ontario government has officially broken ground on the future three-stop Scarborough Subway Extension, marking the start of construction on the largest subway expansion in Canadian history. The new subway extension will deliver better, faster and more reliable transit that the people of Scarborough need and deserve.

“For far too many decades, the people of Scarborough have waited for better transit. Today, our government is getting shovels in the ground and delivering on our election promise to bring fast, convenient subway service into Scarborough,” said Premier Ford. “This long overdue project will create thousands of jobs, significantly increase ridership capacity and cut down daily travel times for more than a hundred thousand Scarborough commuters.”

In May, the province announced that Strabag was the winning team to design and deliver the tunneling work for the Scarborough Subway Extension. With preparatory work now complete, the experienced Strabag team will build the launch shaft, where the tunnel boring machine will be lowered into the ground to start tunnelling the extension next year.

“Since our government took office, we have prioritized building much-needed transit for the people of Ontario. Our multibillion-dollar priority subway projects for the Greater Toronto Area will not only deliver improved transit but spur economic activity and help support our recovery efforts as the province looks towards a more prosperous and brighter future,” said Caroline Mulroney, Minister of Transportation. “Both the federal and municipal governments have endorsed Premier Ford’s historic subway plan, and Ontario is now pushing full steam ahead.”

The project is estimated to support as many as 3,000 jobs annually during construction and unlock better access to employment spaces, schools and other key destinations throughout the city for Scarborough residents.

To expedite work on the Scarborough Subway Extension, tunnelling for the 7.8-kilometre extension from Kennedy Station to McCowan Road and Sheppard Avenue will take place first. Advanced tunneling will be followed by contracts for the balance of the work.

“Our government tabled a very clear plan to deliver better, faster transit for neighbourhoods that have long been neglected. Scarborough was at the top of our list,” said Stan Cho, Associate Minister of Transportation. “This ground-breaking is about our government’s unwavering commitment to get critical transit built faster to make life easier and more affordable for Ontarians.”

In April 2019, the province announced its historic new transit vision for the Greater Toronto Area, with a preliminary estimated cost of $28.5 billion. In addition to the Scarborough Subway Extension, this plan includes the all-new Ontario Line, the Eglinton Crosstown West Extension and the Yonge North Subway Extension.