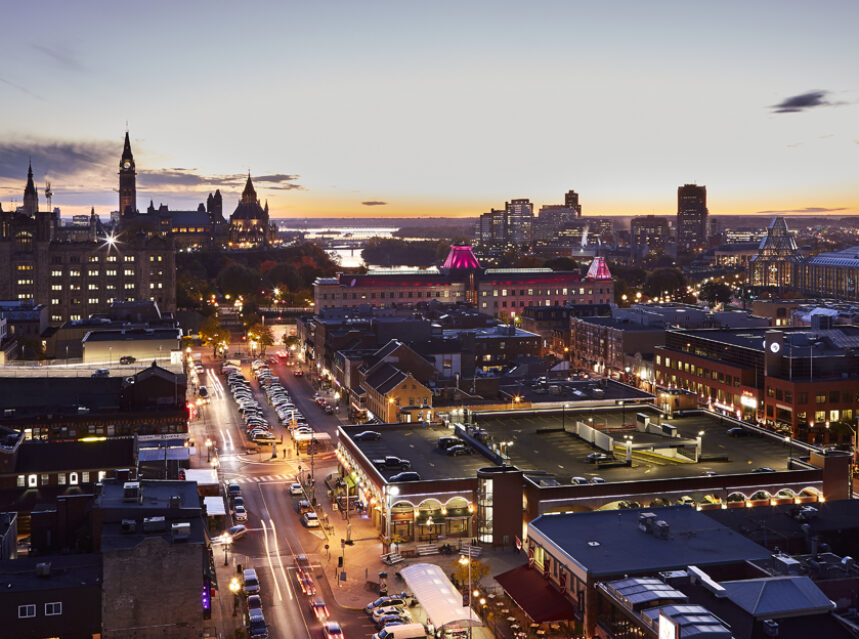 OTTAWA, ON., October 2020 — Having enjoyed conch chowder on a guided culinary walking tour in Bahamas and after visiting some of the best BBQ joints on the Kansas City Barbecue Tour, it was high time to explore some ‘Canadian’ food offerings in Ottawa on the C’est Bon Gourmet Walking Tour of ByWard Market. Although the tour does not specifically promote Canadian food, since we were in the Nation’s Capital, surely, we would try the all-Canadian BeaverTails® right? Thankfully, a stop at the BeaverTail booth is a must on every C’est Bon Walking Tour in the market.

It is this sweet, doughy, donut-like piece of deliciousness that is long and flat, coated in sugar, and yes, it is shaped like the tail of a Canadian beaver. “Some visitors seem quite anxious that we are actually going to eat a real beaver’s tail,” chuckles Stefanie Siska, Co-owner/Tour Leader of C’est Bon Gourmet Walking Tours. The tours are run by her C’est Bon Cooking School in the market which she co-owns with Chef Georges Laurier.

The ‘tail’ is a hand-stretched whole wheat artisanal Canadian pastry that was ingeniously invented by Pam and Grant Hooker in 1978 when they introduced their sweet treat at the Killaloe Fair, just outside of Ottawa.

Stefanie recommends we sample the classic Killaloe Sunrise. The pastry is served hot, coated in sugar and cinnamon and served with a slice of lemon. It’s when you squeeze the lemon juice over the hot pastry that the magic happens. The first bite is sweet yet sour, crisp yet chewy and it is piping yet but somehow you cannot slow down and wait for it to cool. It is that addictive!

“A tradition in Ottawa is to go skating on the Rideau Canal and then stop at one of the BeaverTails® booths along the way for a delicious hot BeaverTail®,” adds Stefanie.

Stefanie and her team have been leading gourmet walking year-round for over 10 years, seasonal Bikes & Bites tours, along with dining tours and cooking classes at their cooking school located in the ByWard Market.

“C’est Bon Gourmet Walking Tours are a great way to get some exercise and taste Ottawa with us,” says Stefanie. “We believe one of the best ways to learn about a city is to explore its neighbourhood food markets, discover local produce and dishes and meet the area chefs and food artisans. Our gourmet walking tours are a great introduction to the national capital region’s vibrant food scene. The guided experience brings the history, culture, and cuisine of this region to life through meeting food producers, artisans and tasting what this region has to offer. Over the past five years there has been a rapid growth in food tourism. Global food tours have become a real thing!”

The House of Cheese

First stop is at The House of Cheese featuring imported and Canadian cheese. Owned Brad Joyal is renowned as the cheese purveyor to the Governor General, Prime Minister, and several embassies! Brad meets us in front of his beautiful shop and offers us a sampling of cheeses including Norwegian cheese, Jarlsberg, Maître Jules and cheese curds. “I estimate we stock about 350 to 450 types of cheeses and meats and specialize in charcuterie boards,” says Brad.

Most food tours have about a dozen participants, but during COVID-19, tours are smaller and booked by appointment. We stop at Shafali Bazaar Fine Indian Food & Spices to try one of their famous Tikka Wraps. Owner Shahab Uddin places some homemade Naan Bread dough into a Tandoori oven that looks like a giant kiln and then fills it with spicy delicious meat and vegetables.

Enroute to the next stop, Stefanie mentions that ByWard Market covers five square kilometers and of the 500 businesses in the market, 300 of them are food related. Established in 1826 by Lt-Col. John By, it is one of Canada’s oldest and largest public markets, open year-round, and home to local farmers, restauranteurs, and artisans.

Corazon de Maiz has a large sign which reads, “Mexican food made from the heart for an authentic experience.” Their specialties include quesadillas, nachos, burritos, and tacos including their delicious homemade beef tacos and their homemade sauces including their fiery hot Diablo ghost pepper sauce.

Some refreshing iced tea is in order, so we stop at the Tea Store which offers a ‘library’ of tea with just about every flavour and type of tea imaginable. They will even make custom blends. Stephanie Caron pulls hot blueberry scones out of the oven as she serves us Apricot White Iced Tea. “We don’t pour hot water over our tea but rather pour cold water over the leaves and chill it overnight in the fridge,” she says.

It is lunch time, so we head to the outdoor café at The Grand Pizzeria, known for their wood fired pizza. “They import all of the ingredients for their Margherita Pizza from Naples, Italy, including the flour, buffalo mozzarella and San Marzano tomatoes,” explains Stefanie. I watch as a baker slides the pizza on a long paddle into the 750-degree oven and in just two minutes, the legendary green, white and red (Italian flag colours) pizza comes out with a hint of wood charring. It is hard to believe something made with fresh simple ingredients could taste so extraordinary!

And as there is always room for more dessert. Stefanie leads us through a maze of four ‘secret’ courtyards, past historic stone buildings, along cobblestone streets to a Paris like sidewalk café at Planet Coffee. “The owners France and Sheila use ‘fluid’ coffee that is solar roasted, and they make the most delicious pastries,” says Stefanie. We sampled the Rhubarb Oatmeal Squares and their top-selling Chocolate Peanut Butter Oatmeal Bars. Once home, I immediately tried to duplicate both recipes!

On our way back to the totem pole we make one last stop at the Maple Syrup Shack and speak to Ross Valenta, son of owner Robert Hupe who owns a maple syrup farm in nearby Quadeville. “We tap more than 23,000 trees on our farm,” says Ross. “We make maple syrup, maple butter, candies and maple sugar crystals. Visitors from other countries go wild for maple syrup and especially the bottles that are shaped like maple leaves.”

Stefanie adds: “As a capital city with so many embassies, this area is not about ‘Canadian’ food, but rather it is about how we blend many cultures together and celebrate the food and heritage of our diverse community.” And that’s the bottom line. Americans may own the burger and fries; the Brits may own bangers and mash. But today’s “Canadian” food has become truly global, especially in Ottawa.

Where to Stay: The Fairmont Chateau Laurier of course!

The hotel was designated as a national historic site in 1980 due to its historic and architectural significance.

Chateau Laurier was built between 1908 and 1912 as the first in a series of hotels by the Grand Truck Pacific Railway to encourage tourists to ride the rails on its transcontinental routes. Ottawa’s premier hotel was commissioned by American-born Charles Melville Hays, General Manager of the Grand Truck Railway of Canada. The Fairmont Chateau Laurier website states: “Following a disagreement with architect Bradford Lee Gilbert, Ross and Mcfarlane Contractors was hired to build the luxury hotel in French Renaissance style using granite blocks for the base, buff Indiana limestone for the walls and copper for the roof. Unfortunately, Hays never had a chance to see his dream come true. Days before the hotel’s scheduled opening, Hayes was returning from England on the ill-fated Titanic and perished on April 15, 1912. The hotel was opened by its namesake, Sir Wilfred Laurier on June 12th, 1912.”

A quick walk through the hotel’s museum gallery offers a glimpse at the many dignitaries who have stayed at the iconic hotel, including members of the Royal Family and leading politicians and heads of state, along with many famous celebrities.

Today the 4.5-star hotel boasts 429 luxurious rooms, a grand ballroom, top-rated dining, and legendary customer service. “Welcoming, safeguarding and taking care of others is at the very heart of what we do and who we are,” states the Fairmont website. “In response to the COVID-19 pandemic, we have partnered with top experts to implement new standards of safety and enhanced operational protocols and procedures which are among the most stringent in the hospitality industry.” For more information visit https://www.fairmont.com/laurier-ottawa/