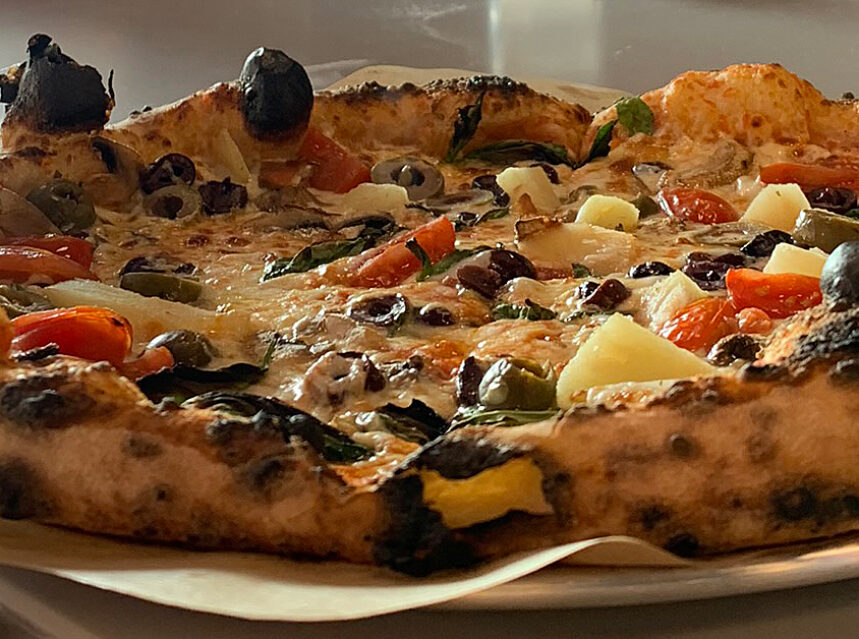 Drawn into the shop by the scent of freshly baked bread and pizza, there was no turning back once inside. I’m greeted by two cheerfully grinning pizza bakers and the intoxicating aroma of fresh ingredients and stone oven pizza. Patrons look up and smile and I decide on the spot, this is where I’m having lunch today, after taking in the fall colours in Riverdale Park and spectacular views of the Don Valley.

“Who doesn’t like pizza? I love it!” declares Karan Dua who opened Toronto’s 14th Pi Co. location just six months ago. He had experienced it at other Toronto restaurants and decided he would deliver a new location to Riverdale, close to the corner of Broadview and Danforth. He was drawn in by the concept of serving up 52-plus fresh toppings, on a light, airy, freshly made Neapolitan style dough, all presented piping hot in just 90 seconds. Now, that’s the fastest personal pizza service imaginable.

“This is Naples style pizza,” explains Dua. “Some know it as Neapolitan dough. The crust is thin and light. We also offer gluten free for four dollars more. We have 10 different cheese options (including vegan) and you can blend together as many as you want.” The meat and vegetable toppings are well beyond the choices found at any chain store and they are all super fresh.”

Choose from six sauces from spicy to tangy and build it up from there with anything you fancy on the day you walk in. It’s pricier than most other fast food pizza joints but you are getting a fresh gourmet Neapolitan pizza from raw to cooked in 90 seconds. Stop by before taking in a concert at the 100-year-old Danforth Music Hall and you will not be disappointed.

The new-concept gourmet pizza chain also has locations in Saskatoon, Hamilton and is on the brink of opening two more Toronto locations including one at Bloor and Church, as well as two in Ottawa.