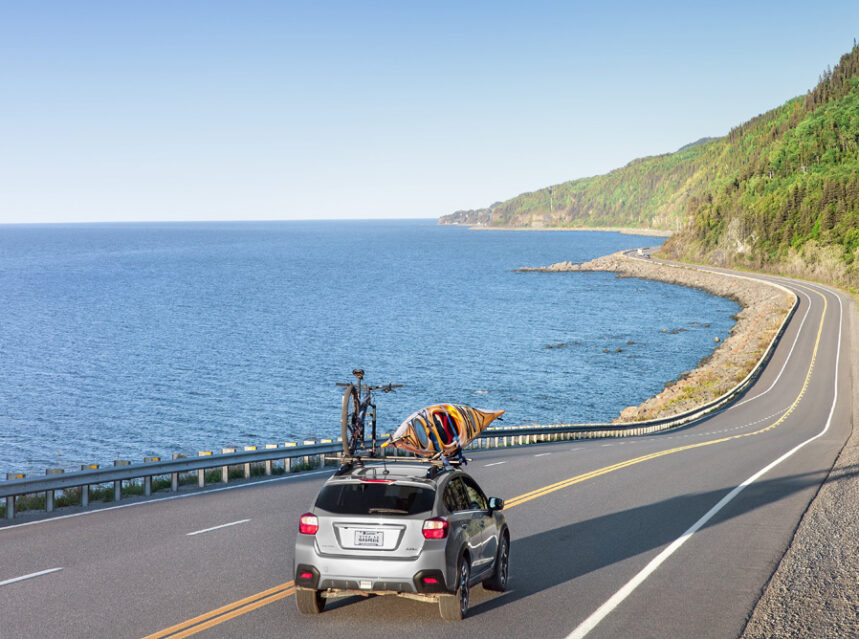 In 2013, National Geographic Traveler included the Gaspé Peninsula in Quebec on its list of Canada’s 50 Places of a Lifetime. It’s easy to see why as you follow Route 132 which hugs the spectacular rugged coastline the entire way around the peninsula.

Gaspé Peninsula is in the south-east corner of Quebec and is part of the picturesque “Quebec by the Sea” region. The peninsula extends east-northeast for 240 km, from the Matapedia River into the Gulf of the St. Lawrence (which surrounds the peninsula). The most-asked question is how many kilometres, or how long will it take me, to drive around the entire peninsula. The answer is approximately 12 hours to cover the 930 km route. Gaspé Peninsula covers almost 32,000 square kilometres which is slightly larger than Belgium, according to one travel website.

The scenery along the sea-side route is rugged, dramatic and hillier than expected, as the Hwy 132 twists and turns through small villages, often with not much more than a general store or coffee shop. If you see a Tim Horton’s –stop. If you see a grocery store—stop. If you see a gas station—for sure stop! We almost learned this the hard way. Thinking we had “plenty of gas” (famous saying) we drove for miles (kilometres) in search of a gas station. Even the most touristy town on the peninsula (Percé home of the Percé Rock) doesn’t have a gas station! There plenty of interesting shops, art galleries and great restaurants, but be warned—no gas station! Apparently, there were a few gas stations in town at one time but now the closest gas station is about 10 kilometres up the road.

From Quebec City, it’s about a four-hour drive along Highway 132 to hit our first destination, the town of Rimouski. Close to town in Pointe-au-Père a must-see is the Pointe-au-Père Historic Site and museum. The museum presents the history and a collection of artifacts from the Empress of Ireland which sank in the St. Lawrence in 1914. Of the 1,477 people on board, 1,012 died, making this the worst maritime disaster in Canadian history. You can also visit the historic lighthouse and a real submarine called the Onondaga. It’s the first submarine open to the public in Canada and it’s gigantic.

In the town of Matane, take a detour to discover Reserve Faunique de Matane where you get an opportunity to encounter moose and black bear as you take part in guided excursions on this wildlife reserve. If flowers and gardens are more to your liking, visit Reford Gardens in Grand-Métis, located abut 50 km west of Matane. Each year the site hosts the International Garden Festival which presents contemporary gardens designed by artists and architects from around the globe.

Cap-Chat is a pretty seaside town with lots of chalets and accommodations for visitors. It is also one of North America’s largest wind farms with 133 wind turbines perched on cliffs to capture the brisk sea breezes.

For a side trip, venture south of Sainte-Anne-des-Monts to enjoy Parc National de la Gaspésie to climb up Mount Albert or Mount Jacque-Cartier in search of caribou that live in the artic tundra on the mountain summits.

The tip of Gaspé Peninsula is the town of Gaspé where visitors can enjoy sea kayaking, whale watching or just go to a beach for the day. Gaspé became the Cradle of Canada when Jacque Cartier erected a cross in 1534. The town has many museums and historic sites and a bustling main street lined with trendy cafes, eateries and shops. We stayed at the historic Auberge au William Wakeham overlooking York River. Once the home of a prominent doctor, it features well-appointed rooms decorated with antiques as well as some newer accommodations in an addition at the back of the home. There’s excellent fine dining restaurant on site. The B&B includes a fabulous full-course breakfast prepared by the chef/owner.

Forillon National Park is located on the eastern most tip. For a breathtaking view, visit Forillon lighthouse—Canada’s tallest lighthouse, at Cap-des-Rosiers.

The village of Percé is home to the famous Percé Rock. The town itself is quaint, filled with seaside shops, galleries and restaurants. But the star of the show is Percé Rock which juts dramatically out of the sea and boasts a small semi-circular hole which resembles a door to the beyond. You can enjoy a view of the rock from the village or the town wharf, or while eating Lobster Rolls and Gaspé Seafood & Clam Chowder at the waterside La Maison du Pecheur Restaurant. But for a view to beat all others, visit Percé UNESCO Global Geopark and buy a ticket to take a shuttle up Mont Ste-Anne. At the top of the mountain, you will discover a suspended wood and glass platform cantilevered into a cliff 200 metres above sea level. The views of Percé Rock are as dizzying as they are breathtaking. So high up, you almost feel like a seabird soaring over the mountain. Then you can either walk back down, take the shuttle, or choose to zipline down the mountain!

Visitors can also take a sea excursion to Bonaventure Island to visit Parc national de l ’Île-Bonaventure-et-du-Rocher-Percé to observe over 200,000 seabirds including a colony of Northern Gannets. The island’s heritage homes give visitors a glimpse into what island life was life a century ago.

There is plenty to see and do in the Bonaventure area near Percé Rock. You can enjoy hiking, white-water paddling, sea or salmon fishing or spend the day at the beach. Two must see spots are the Musée Acadien du Québec as well as Banc-de-Pêche-de-Paspébiac Historic Site to learn about the history of the area’s two largest fishing companies.

Chaleur Bay has the distinction of being a member of the Most Beautiful Bays in the World Club! A stop at the Battle of Restigouche National Historic Site in Pointe-à-la-Croix is where visits learn about the last naval battle between France and Great Britain which sealed the fate of New France in 1760. Close by in Nouvelle, Parc National de Miguasha is a 378-million-year-old fossil-rich site is a UNESCO World Heritage Site.

how to get to gaspe, Quebec by the Sea, things to do in gaspe, Things to see in GAspe, where is gaspe