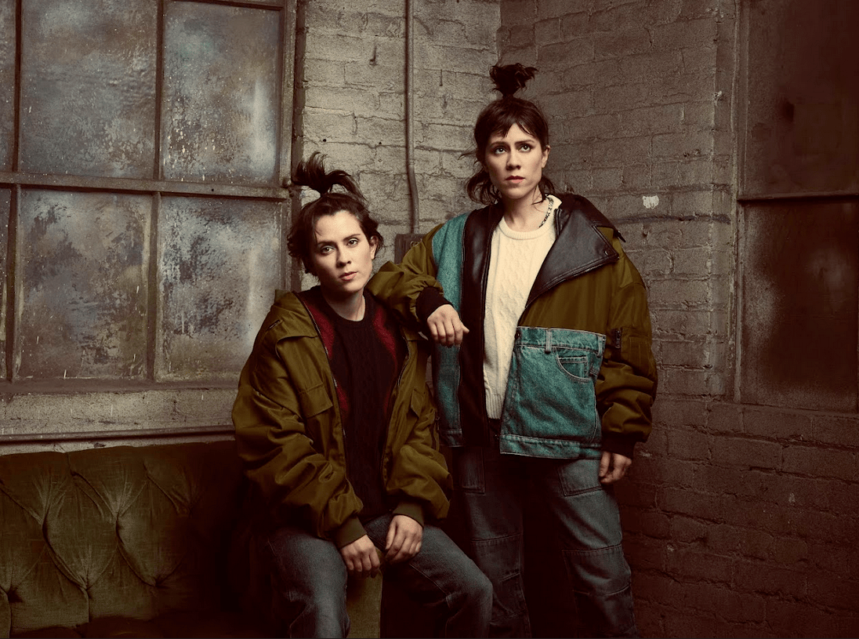 Introducing the next exciting chapter in twin sister Tegan and Sara Quin’s musical career, the biting, propulsive slice of power pop single reflects on the turbulence the twins felt in both their own lives and the world at large over the past several years. “Fucking Up What Matters” was co-produced with John Congleton (Sharon Van Etten, Angel Olsen and Future Islands) and will be found on their forthcoming tenth album. The single release is accompanied by a Tony Wolski-directed video featuring High School stars Railey and Seazynn Gilliland.

“ ‘Fucking Up What Matters’ felt like an ode to the moment in your life when you realize that you have most, if not all of the things you wanted and you start to think about what would happen if you just walked away from it all. It’s the moment in the middle of the night when you start to daydream about something else, something you never imagined.,” said Tegan Quin. “It’s the feeling you have when you think you might have hit a new low, and yet you’ve never felt so good. Sometimes it’s admitting that you can’t stop yourself from fucking up what matters, that you feel your strongest. And as my mom would say, it’s often when we’re fucking up what matters, that we’re learning the most about ourselves,” said Tegan.

The new song reflects one of the biggest career changes for the duo, leaving their longtime label home to sign with Mom+Pop Music:

“Michael Goldstone signed us to Sire/Warner in 2006. We had just made The Con and felt like the vision Goldie and the team at Sire had for us and the album were a good fit. But soon after he signed us, he left to start Mom+Pop. We never held it against him. But joked that one day we’d work together for real,” Tegan and Sara said, explaining the move.

“So it was with great enthusiasm that we agreed to sign to Mom+Pop when our deal with Warner ended in 2021. We look forward to being back at an indie label, on a brilliant roster, with Goldie and the label’s incredible team helping us start this next chapter in our lives with the release of our tenth album.” said Tegan.

The release of “Fucking Up What Matters” follows the recent Amazon Freevee (formerly IMDb TV) announcement that the streaming service has begun production on High School, a new Original coming-of-age series co-created, and executive produced by Tegan and Sara Quin and Clea DuVall. The series is based off the twins’ critically acclaimed, New York Times bestselling memoir of the same name. Produced by Plan B Entertainment and Amazon Studios, High School stars TikTok creators and TV newcomers Railey and Seazynn Gilliland, portraying the high school versions of Tegan and Sara. Special guest stars Cobie Smulders and Kyle Bornheimer will also join the cast, playing the twins’ parents. The series is currently in production in Calgary, Alberta, Canada.

Also on the horizon is the middle-grade graphic novel duology Tegan & Sara: Junior High and Tegan & Sara: Crush, written by the twins’ and illustrated by Eisner Award winner Tillie Walden. The contemporary story is about identical twins growing up and growing apart, coming to terms with their queerness, and falling in love with music over the course of junior high. Publication for book one is slated for spring 2023.

With nine studio albums to their credit and millions of records sold, Tegan and Sara have used music as a way of storytelling throughout their 20-year career. With that storytelling at the core, they have built a multi-faceted media empire that stretches into TV, books, newsletter, and public service, but always deeply rooted in music.

Tegan and Sara recently launched “I Think We’re Alone Now,” a Substack newsletter that includes both free and paid-tier content, spanning audio and text-message conversations as well as essays, lyric annotations and behind-the-scenes looks about their upcoming projects.

Tegan and Sara have received three JUNO Awards, a Grammy nomination, a Governor General’s Performing Arts Award, and the 2018 New York Civil Liberties Union Award. Outspoken advocates for equality, the duo in 2016 created the Tegan and Sara Foundation, which fights for health, economic justice and representation for LGBTQ girls and women.

LISTEN TO “FUCKING UP WHAT MATTERS” HERE