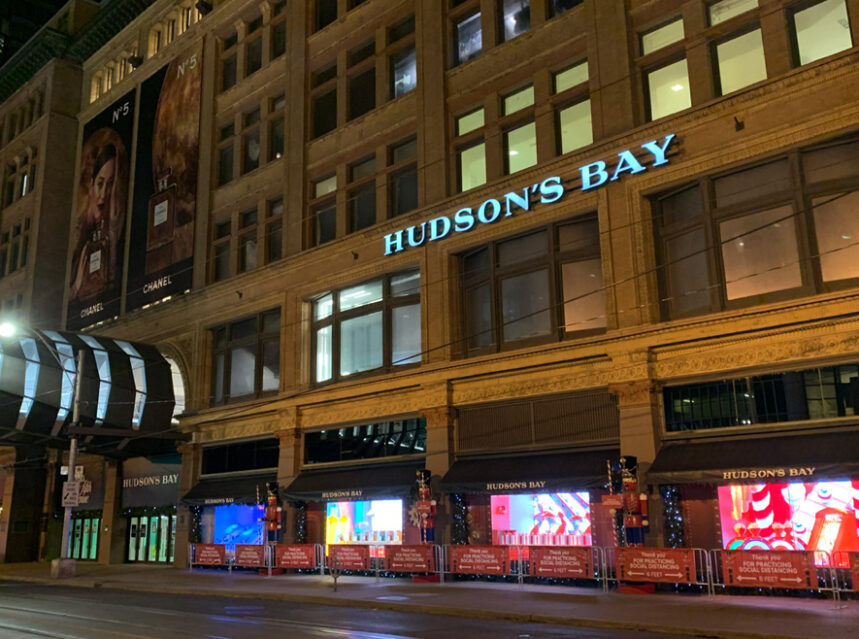 TORONTO — A spokesperson for Hudson’s Bay (The Bay) told CP24, Toronto’s 24 hour news and information channel that it is closing its flagship location on Queen Street Tuesday after controversially leaving it open Monday, amidst the lockdown in effect in Toronto and Peel Region.

For Hudson’s Bay’s flagship Queen Street location it was business as usual on Monday despite the 28-day closure orders for non-essential retailers to close their stores to in-person shopping in Toronto and Peel Region.

Toronto and Peel Region officially entered a 28-day lockdown on Monday, forcing restaurants, gyms, and non-essential stores to close to slow the spread of COVID-19.

Confirming why the Bay’s Queen and Yonge location remained open, a spokesperson for The Bay told Newstalk 1010 that the company’s Queen Street location downtown is allowed to stay open to customers because groceries and other “essential items” are sold inside.

Late Monday, The Bay told CP24 that their Queen Street location remains “open because there is a grocery store in the basement of the eight-floor location.”

Meanwhile also according to CP24, one shopper told them Monday, that when he asked a staff member at the Queen Street location about where he could find the grocery department, they told him groceries could be found in the basement at Pusateri’s. The customer then said he told the Bay employee that Pusateri’s wasn’t open, and they said they are restocking and it will be open the next day.

At the Monday afternoon press conference with Ontario officials, when asked why the Bay’s Queen location was still open, Premier Doug Ford said he would “have to look into it.”

Then later on Monday, The Bay said they are closing their flagship store. A spokesperson from The Bay told CP24, “On Sunday evening, the order issued by the province changed the guidelines regulating the operation of retail stores. We reviewed closely to ensure compliance and, as such, closed all our stores in Toronto and Peel but one, which contained a grocery store,” the statement read. “We understood this to be in line with the province’s direction, however we have now made the decision to close our Queen Street store tomorrow. All Hudson’s Bay stores in Toronto and Peel will offer shoppers curbside pickup.”