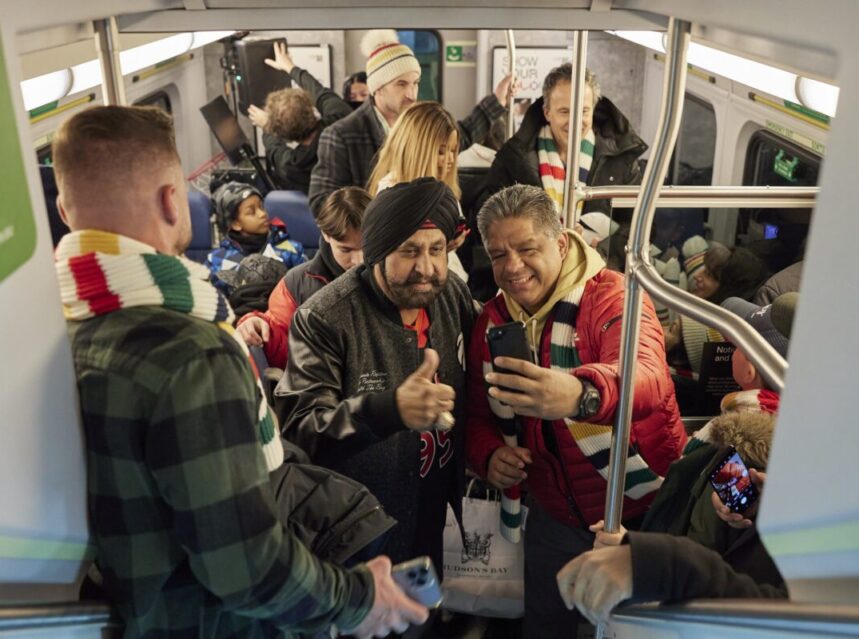 From Clarkson Station in Mississauga through to Union Station, fans were treated to swag and gift card giveaways

TORONTO, Dec. 17, 2022 – Passengers embarking on GO’s Lakeshore West train Friday night quickly realized it wasn’t an average ride. In a larger-than-life extension of The Bay’s partnership with the Toronto Raptors and just weeks following the drop of Collection ||, the retailer’s second apparel collaboration with the team, a full GO train car transformed into an immersive fan ‘pre-party’ experience.

Delivering surprise and delight beginning at Clarkson Station in Mississauga through to Union Station, fans were treated to swag and gift card giveaways while riding with a live DJ and an on-train hoops competition with prizes including tickets to a Raptors home game. To cap the ride off in ultimate superfan style, Raptors Superfan Nav Bhatia kept the ‘party’ going through to Scotiabank Arena, leading a parade of game-ready fans through Union Station to Jurassic Park in time for game tip-off.

Once game-goers entered Scotiabank Arena, they were able to shop The Bay x Toronto Raptors Collection || in a dynamic pop-up store—all part of The Bay’s Scotiabank Arena ‘takeover’ which also included branded billboards, giveaways and more.

Not to worry. Passengers can ride in The Bay’s wrapped GO train through December 26  and shop Collection || now on TheBay.com.