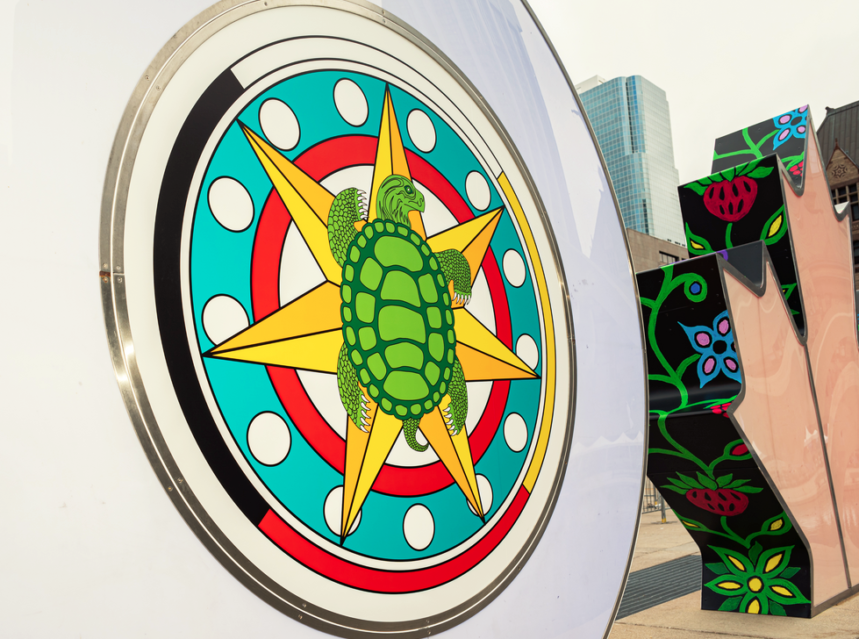 TORONTO, Sept. 28, 2022 – Today, the City of Toronto unveiled Rekindle, a new wrap on the Toronto Sign. The new wrap was created in recognition of UNESCO’s International Decade of Indigenous Languages (2022 to 2032), which focuses on the rights of Indigenous language speakers worldwide. Joseph Sagaj, the artist who designed the new wrap, joined City officials, Elder Dorothy Peters, young people and singer Zeegwon Shilling at the unveiling on Nathan Phillips Square.

Sagaj’s design, Rekindle, was selected by a community jury in May. Rekindle offers a glimpse into how languages are vital to identity, voice and expression.

Sagaj is Anishinaabe (Ojibwe) of the Sturgeon Clan and is from the remote community of Neskantaga in Northern Ontario. Throughout his career, Sagaj has felt honoured to share his Anishinaabe ancestry and heritage through art, featuring Indigenous knowledge, culture and teachings on numerous private and public commissions designing logos, murals, illustrations and painting projects for various organizations and different governments. Rekindle will remain on the Toronto Sign until the fall of 2023.

“Language is the essence and spirit of my identity and culture. However, it is not exclusive to the spoken word in the ways of storytelling I grew up hearing and speaking in my community. In my later years, I realized that expression and voice are also reflected in art, poetry, song, dance, and storytelling through various mediums and genres. Language is also present in ceremonies; the spirit is expressed by way of the heart and its lifeways,” said – Joseph Sagaj, Anishnaabe artist, Rekindle.

“My art renderings and what is featured here in the “TORONTO” sign is a ‘glimpse’ of expressions of these ways and reflection of values. From its presentations of syllabics, beaded designs, medicine berries, sacred scrolls, song, dance, and teachings; the seven-pointed star system of clans and governance to the 28-day, 13-moon calendar cycle; of the earth, air, water, to the sky world; of life, the androgynous viewing the vast universe, the poem, to the children, youth, young men, and women and the wisdom of our Elders and Knowledge Holders, are the significance of our traditions, heritage, and world view,” said Sagaj.

The City has proclaimed the International Decade of Indigenous Languages. More information on the proclamation is available on the City’s proclamation webpage.

The City will join the rest of Canada in marking the National Day for Truth and Reconciliation on Friday, September 30 and encourage residents to commit to the truth, reconciliation and justice process with First Nations, Inuit and Métis peoples.

Photographs of the Toronto Sign can be shared with the hashtag #TOsign. More information about the sign and its wrap is online