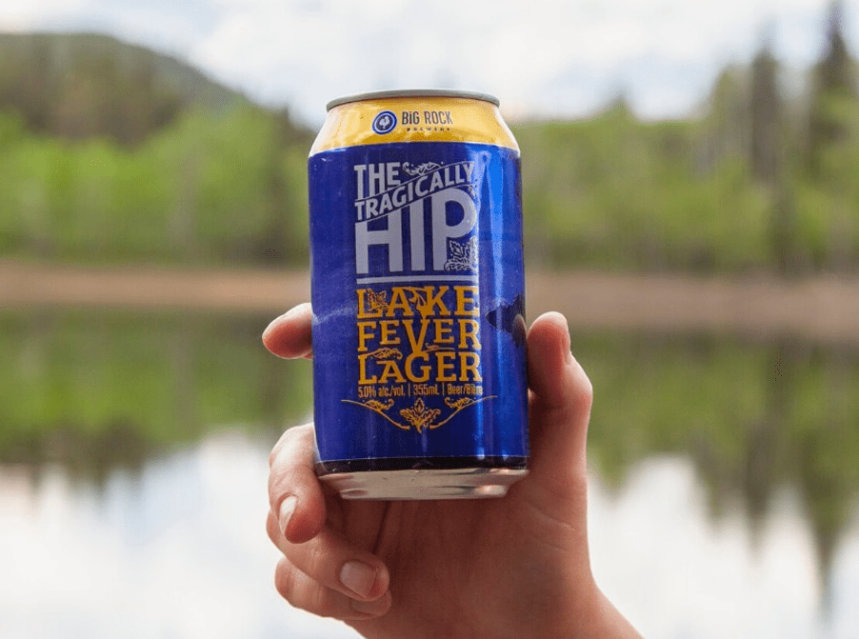 TORONTO, June 21, 2021 – Kick off the first day of summer with a new soundtrack from Canadian rockers The Tragically Hip and their first and only beer, Lake Fever Lager, brewed in partnership with Big Rock Brewery.

That’s right, it’s official, The Tragically Hip’s exclusive beer is finally here, despite some Hip fans drawing a connection between the quintessentially Canadian band and Mill Street’s 100th Meridian Amber Lager for so many years.

The Tragically Hip’s exclusive beer collab with Big Rock Brewery gets its perfect-for-summer name from their single “Lake Fever” off their album, Music@Work, released way back in 2000.

It is a premium crisp 5% abv lager described as “clean, uncomplicated, with a golden colour and a very approachable hop profile.”

Lake Fever Lager now available for pre-orders at bigrockbeer.com and at select retailers across Canada as a 12-pack starting this week.

The Hip said, “We’ve harboured the ambition to release our own beer for a long time but could never find the right partner. Until now. We’re proud to announce the arrival of Lake Fever Lager. Big thanks to the great folks at Canadian owned and independent Big Rock Brewery, they’ve been amazing to work with.

“Over the last six months they have helped us develop a cleansing, thirst quenching lagered ale that is long on taste but still refreshing and crushable; perfect for those occasions when one or two is just not enough. We hope you’ll join us in raising a glass of Lake Fever Lager on the dock or patio, or wherever you find yourself this summer, and enjoy the company of friends and family. We all deserve it. Please consume responsibly and stay safe, always,” added The Hip.

Big Rock is recognised as Calgary’s largest brewery, and they also have locations in Toronto’s Liberty Village and Vancouver.

Lake Fever Lager is available to pre-order for delivery in AB, BC and ON here, and will also be sold at select beer retailers across the country starting this week. Each 12-pack comes with a QR code to be scanned for a chance to win one of 20 prize packs from Big Rock and the Hip.

“This was a true collaboration in every sense as we worked together through several recipes to ensure the head, the colour, and the taste profile were exactly what the band was looking for,” said Wayne Arsenault, CEO of Big Rock Brewery. “We couldn’t be prouder of Lake Fever Lager and the chance to work with a national treasure like The Tragically Hip.”

To celebrate the launch, Canadians can enter to win 1 of 20 ultimate prize packs The Tragically Hip by scanning the QR Code on 12-packs.

You may recall the brewing controversy in February of this year, with The Tragically Hip announcement that they are suing Toronto’s Mill Street Brewery for more $500,000 for alleged trademark infringement in the promotion of its 100th Meridian lager. The band allege in legal documents that Mill Street Brewery tried to associate its 100th Meridian Organic Amber Lager with The Tragically Hip through misleading social media posts.

According to a CBC report the band’s lawyers say they want the brewery to avoid promoting 100th Meridian Organic Amber Lager “in a way that may lead to confusion — potentially by renaming it — as well as publicly distance itself from the band and pay more than $500,000 in damages.”

Much like the song “Lake Fever” inspiring the The Tragically Hip’s new Big Rock lager name, Mill Street’s 100th Meridian Amber Lager is a similar name to the Hip’s hit song “At The Hundredth Meridian” from their hugely popular 1992 album release, Fully Completely. Of course no one actually owns the rights to the geographical 100th meridian, which is a reference to the line of longitude that marks 100 degrees west of Greenwich, the beginning of the Great Plains of Canada and the United States.