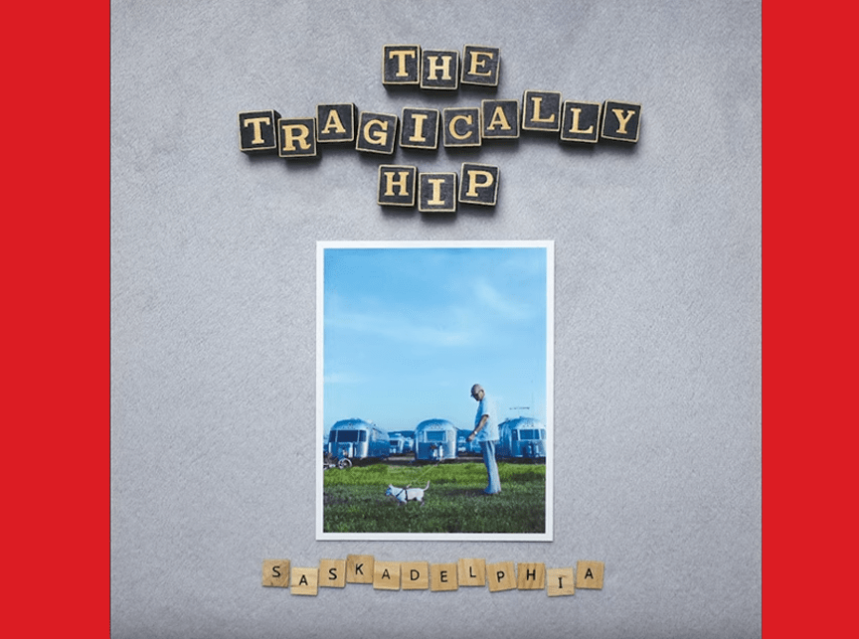 TORONTO, ON., May 20, 2021 – If performing live with Feist and receiving the Humanitarian Award at the 50th Annual JUNO Awards wasn’t enough excitement for the Canadian music legends, The Tragically Hip have a new album coming out tomorrow 21/05/21.

Yes you heard that right. Five of the six songs of this new album entitled, Saskadelphia were recorded during the Road Apples sessions in 1990. One song, “Montreal” was recorded live at the Bell Centre on the eleventh anniversary of the horrific École Polytechnique massacre of 1989.

Mike posted the preview on his Instagram/Facebook story feed early on Thursday morning (May 20, 2021), and the music world is abuzz along with most of Canada no doubt. The songs were recorded in New Orleans for their 1991 release, ‘Road Apples’ but they didn’t make it on the album that was originally going to be called “Saskadelphia.”

The band had so many songs from their early days playing the southern Ontario club circuit and they recorded a double album’s worth of material during the Road Apples sessions, 44 tracks in fact. The album title, Saskadelphia was originally suggested by drummer Johnny Fay.

“I remember seeing this Church of the Christadelphians and thought about how part of it could be crafted onto any other word,” Faye recalls. “We were touring a lot, going from New York and Boston to Philadelphia and Saskatoon. It seemed like the clubs were the same size, and you could be anywhere. So, we crafted one part of a Canadian city onto an American one.”

“What rose to the top of the ballot from a bunch of possible titles was Saskadelphia,” reads writer Lindsay Pereira’s introduction to the new album. This title, however, did not thrill the Hip’s American record label executives who said it sounded too “Canadian.”

Pereira says guitarist Bobby Baker remembers how their American record label reacted. “They thought it sounded too Canadian,” he laughs, “So we suggested Road Apples instead, which they loved because they didn’t understand the reference. We couldn’t get more Canadian than that and got laughs about it for years.”

The recordings had been tucked away until June 2019, when an article in The New York Times had incorrectly listed The Tragically Hip among those who had lost tapes in a 2008 fire in the backlot of Universal Studios. This served as an instant reminder that the unreleased material had been left behind.

“We felt we must have lost something too,” says Fay, “so, we began asking questions and eventually found our boxes of two-inch tapes with no labels. It became like a forensic process, looking for the handwriting of engineers we had worked with, like Bruce Barris or Mark Vreeken.” The recordings had found their way to Canada in 2001, and during the pandemic summer of 2020, the archived studio tapes were unboxed so to speak.

“We knew we had a lot to look for because we recorded a lot back then. We didn’t know what was there,” said Baker to Pereira, “so this meant baking them and listening to them as they were being transferred, hearing them for the first time in 30 years. It was crazy.”

Saskadelphia features six tracks beginning with “Ouch,” “Not Necessary,” “Crack My Spine Like A Whip,” “Just As Well,” and “Reformed Baptist Blues” are all salvaged from the studio sessions, while “Montreal,” as mentioned was recorded live at the Bell Centre.

They used the live version of “Montreal” because they couldn’t locate the recorded one. “We wrote it just after the incident and played it a bunch of times,” says Bobby Baker, “but haven’t located the tapes for this track. We got a great version from the live show.”

“That night (at Bell Centre), it was suggested we could play ‘Montreal’ and I was in the dressing room. I ran through it to make sure I knew it, but there were questions about whether we would pull it off,” recalls Baker. “Gord Downie wasn’t sure about the lyrics, so a road manager pulled them up on the Internet. He did a quick once over and said, ‘Okay, we got this.’ Then, we went out and played like we had been playing it forever.”

Bassist Gord Sinclair referred says Saskadelphia is “a bittersweet record… We are, sadly, never going to have the chance to put out new stuff. For us, in our minds, this is new.” While guitarist Paul Langlois says he hopes fans old and new appreciate “the sound of a band on fire.” Drummer Johnny Fay recalls tells Pereira how things used to be after the Hip completed mastering a record. “We would be able to sit with it for a while after it was mixed and mastered. It was this golden time of two months or so, where we could play it for friends, but had no idea how it would do,” says Fay. “It’s one of those things that, when you’re a band, you want as many people to hear your music as possible. You never really know, but it’s nice to be able to get it out at the end of the day. It’s part of our DNA.”

“I went ‘WOW’ when I heard ‘Ouch’ after all this time,” says Rob Baker. “We were a pretty good little band.”

Saskadelphia is out on Friday across all streaming platforms. Meanwhile The Tragically Hip are will receive the 2021 Humanitarian Award at the 50th Annual JUNO Awards on Sunday, June 6, in Toronto; Rush’s Geddy Lee and Alex Lifeson will present the band with the honour. The band will also perform live along with popular Canadian songstress, Feist.