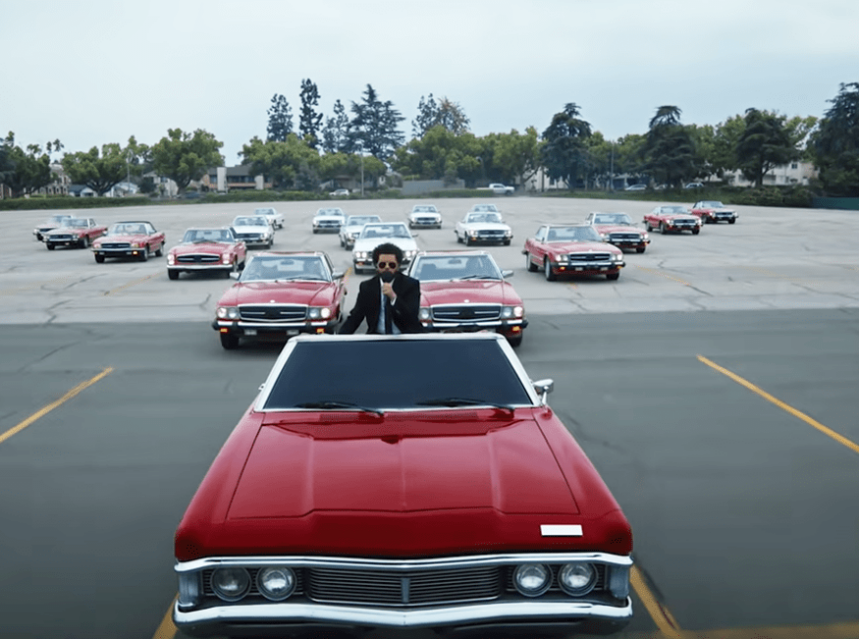 Meanwhile much beloved Toronto superstar, Drake won the BBMA Artist of the Decade Award and celebrated by bringing his son, Adonis on stage renting out the new 70,000-capacity SoFi Stadium in Inglewood, California. Drake also won an award for Top Streaming Songs artist bringing his BBMA leading total to 29, including the Artist of the Decade award.

But all the accolades aside, The Weeknd also turned heads with an incredible mesmerizing video for his new hit “Save Your Tears” which featured a veritable fleet of red and white classic cars along with 4 huge white tractor trailers.

It was the colours of the Canadian flag driving in various formations behind and around the Toronto singer, resembling the patterns more associated with synchro swimmers. The patterns looked particularly dramatic when featured from above, as well as dangerous when featured head on. Of course trained stunt drivers – all 21 of them – were seated behind the wheels.

The video’s producer, Alex Lill said their team were inspired by old 1950s synchronized swimmers. The concept was more about synchronicity and elegance, than the Fast and the Furious.

Lill told Billboard that he “had to go source every car individually online that was for sale and find 20 of them in 4-5 days. And of course they’re vintage cars that were used, so they’re breaking down like flies.” They even had a NASCAR mechanic team on site, to keep all the cars in optimal working order.

The popular live awards show held at Los Angeles’ Microsoft Theater was hosted by Nick Jonas. Other big winners included Pink, who was the recipient of the BBMA’s Icon Award, along with Gabby Barrett, who took home three awards, Pop Smoke who won 5 awards including top Billboard 200 album for Shoot for the Stars, Aim for the Moon and Best New Artist. Pop Smoke, who died in February 2020is the first artist to win Best New Artist award posthumously. Meanwhile, Morgan Wallen won three awards, including top country artist and top country album.