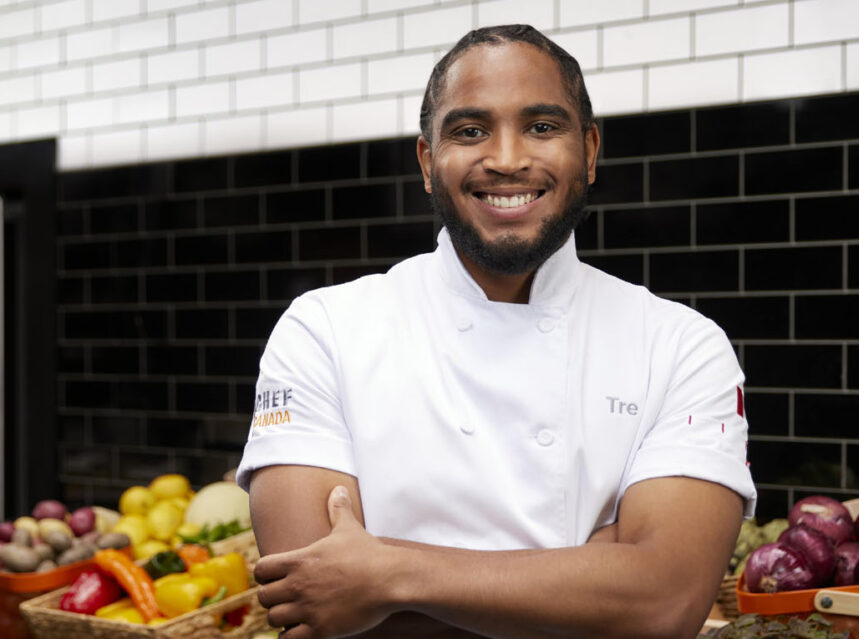 TORONTO, Nov. 8, 2022 – Food Network Canada’s esteemed culinary competition Top Chef Canada started out with 11 top chefs from across the country and it came down to only two finalists: Chef Trevane (Tre) Sanderson of Toronto and Chef Deseree (Dez) Lo of Vancouver, B.C. Standing before the judges, the two nervously awaited their decision on who would be named the next Top Chef Canada winner and earn the largest prize package in the history of the show. This included a cash prize of $100,000 provided by Royale Tiger Towel, a luxury Lexus NX, a brand-new kitchen outfitted by KitchenAid, an exclusive farm-to-table adventure courtesy of Glad and a $10,000 cash prize from DoorDash.

And the winner of Top Chef Canada Season 10 is….Trevane Sanderson!

“It was such a satisfying feeling, and I feel so proud of how far I have come,” says Tre Sanderson. “I came from humble beginnings and as a man of colour, we don’t often get opportunities like this. I will use my win to influence youth, touching back to my roots and going to schools to tell my story. It’s not about me now, but about inspiring the next generations to be leaders.”

Top Chef Canada judging team included chef and cookbook author Eden Grinshpan as host, along with judges Mark McEwan, chef and owner of The McEwan Group, restauranteur Janet Zuccarini, food writer Mijune Pak, renowned food journalist and critic Chris Nuttall-Smith along with acclaimed chef and cookbook author David Zilber. Most recently Zilber was the head of the Fermentation Lab at the revolutionary three-Michelin-star restaurant Noma in Copenhagen, ranked as the top restaurant in the world.

The Top Chef Canada series is known for showcasing the talents of the country’s best chefs who are thrown some curve balls along the way including the Quickfire Challenge which was reimagined as the Culinary Skills Race. Chefs are challenged to push the boundaries of creativity. This year’s twist was a trip to the Caribbean.

Speaking of the islands, the final competition was held in Grand Cayman. “I had never been to the Caymans, so it felt like a vacation to me,” says Tre. “We got to stay at a beautiful hotel on a gorgeous island. I had a blast and can’t wait to go back again.”

Tre came to the competition with over 10 years of culinary experience, having worked in some of Toronto’s best kitchens, including Baro, Hotel X and he is currently the Chef de Partie at Vela. As a first-generation Canadian with Caribbean roots, Tre says he drew inspiration from his Jamaican heritage for some of the dishes he created for the judges.

“I was raised by a single mom with four brothers and one sister, and for me, growing up was not the easiest as my mom struggled to put food on the table. I learned that it was important to work hard, keep your head down and do the best you can. My mom cooked classic Jamaican food with a huge depth of flavour. She inspired me to cook and more importantly, she told us to make sure you love what you do. I love preparing food and enjoying the feeling of putting joy and a smile on people’s faces. My influences involved using different spices and ingredients, such as the dumpling soup which I turned into a Jamaican dumpling dish. The thing with Top Chef Canada is that you never know what the next challenge will be. Some things I cooked on the fly—you never know if you will make something new and exciting or stick to what you know. I ended up trying a lot of new things.”

After Tre’s big win, Judge Mark McEwan said he would like to visit Tre at his own restaurant one day. Asked if that’s a possibility, Tre answers: “Yes, I want to open my own restaurant one day and I am working to make that happen. Right now I am working on a pop-up restaurant to come in 2023, which is looking like it will be a very busy year. My food style will be more of an island vibe based on the dishes from Jamaica, Trinidad, Barbados, for a combination of diverse Caribbean food from the islands.”

Tre’s advise to young chefs is this: “Stay hungry, stay humble and learn something new everyday. Take your time and don’t rush things—this is a marathon, not a race. I am still learning and challenging myself. I don’t rush anything.”

Asked if he had a mentor, Tre answers: “No, and that’s what makes my story unique. I never had a chef by my side helping me out. I do a lot of work at home and on my days off I am constantly reading books and experimenting with food. I am basically self-educated. I think the key is to truly love what you do and keep on learning and having fun with it.”