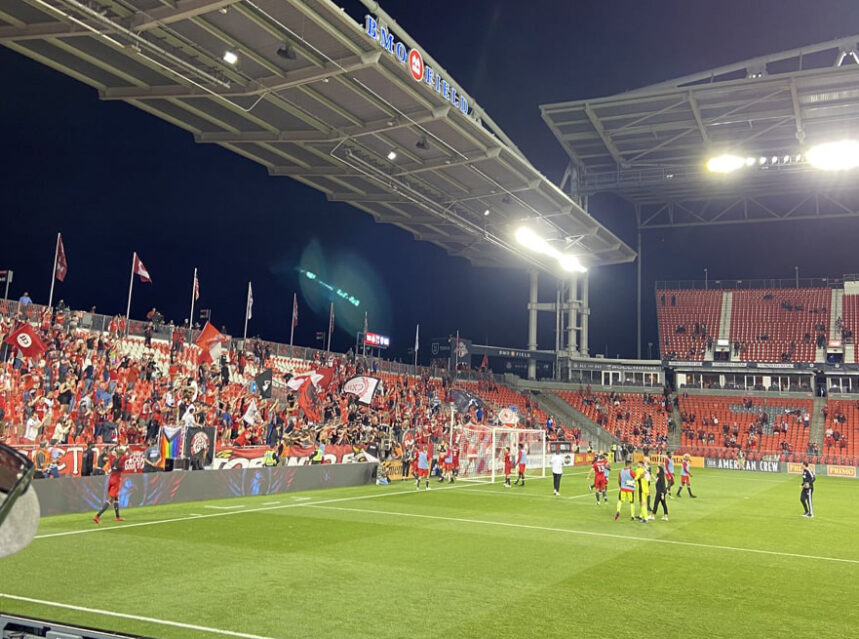 After 16 months, Toronto FC will welcome its largest crowd back to BMO Field on Wednesday night with the visit of the New York Red Bulls. 15,000 fans will be in the stands to watch TFC tonight thanks to the easing of COVID restrictions.

“It was really an amazing experience,” said Dom Dwyer, who made his home debut for the club on the weekend. “I’ve played here before, but obviously not as a Red, so I’m very happy to be here and it was amazing having the fans back, to see the group that excited.”

“They’ve been talking about it for months and months with me, about how amazing it is. I know it wasn’t a full stadium, but it was a really special experience and one that I won’t forget,” he continued. “I’m really looking forward to tomorrow and having more fans out there.”

Unbeaten in two matches under Javier Perez, against some of the best opposition the Eastern Conference has to offer, TFC followed up their win away over first-place New England Revolution with a draw against third-place Orlando.

There is much ground to make up, but doubt never entered the equation.

“I’ve been a part of a group that’s not performed well before, but not part of a group that still is close and knit and bonded together. There was never a doubt that we were going to turn it around,” he added. “We’ve got work to do, but I believe we’re on the right track and the guys are confident.”

And Jozy Altidore’s return to the lineup for the first time since May 22nd after a disagreement with former coach Chris Armas, couldn’t have come soon enough. Altidore made an immediate impact when he scored on Saturday.

“It was really special. He deserves that moment,” reflected Dwyer. “A lot of people don’t give Jozy enough respect for what he’s done and what he’s still doing for this club.”

“I look at our team and it’s stronger with Jozy in it, always. So we’re very happy he’s back,” he added. “It was never a doubt in my mind that we’d have him back on the field scoring goals – that’s where he belongs.”

With the Gold Cup break over and Canada qualifying for the Quarter Finals after posting back to back 4-1 victories over both Martinique and Haiti, followed by a 1-0 loss to the USA, the next portion of the schedule is a daunting one. TFC will play nine games between Wednesday and August 27 when the league pauses once more for international action.

Red Bulls midweek, away to the Chicago Fire on the weekend. Nashville SC, the Philadelphia Union, NYCFC, New England, Atlanta United, Inter Miami CF, and CF Montreal. All Eastern Conference opponents, lots of points to be had.

‘We’ve got a lot of games left, there’s a lot of football, a lot of points up for grabs,” observed Dwyer. “We can’t do it all in one night. It’s going to be a slow thing, it’s going to take the whole group. We’re focused on the task in hand and we’ll take it one game at a time.”

That task is a mighty one, matching the effort of the visiting Red Bulls.

“Red Bulls as a team is a little bit different than any other team in the league because they play in such a high intensity,” pinpointed Perez. “If you don’t match the intensity that they put in the game it’s very difficult to compete against them. We will have to match their intensity.”

New York come into the match unbeaten in three matches – draws away to Atlanta and home against Philadelphia, either side of a 2-1 win away to Orlando City – and they will be well rested as their weekend match against Miami was postponed due to torrential rains.

The Red Bulls won a May 8 meeting 2-0 on goals from Frankie Amaya and Clark, both set-up by Fabio.

“They’re a great side. This is going to be a difficult match,” stressed Dwyer. “They’re very organized, they’re a quick side, but we’re playing at home. We want to make this place a fortress, as it’s been for many years.”

“That starts with a positive performance tomorrow,” he urged. “We want three points and then keep building from there.”