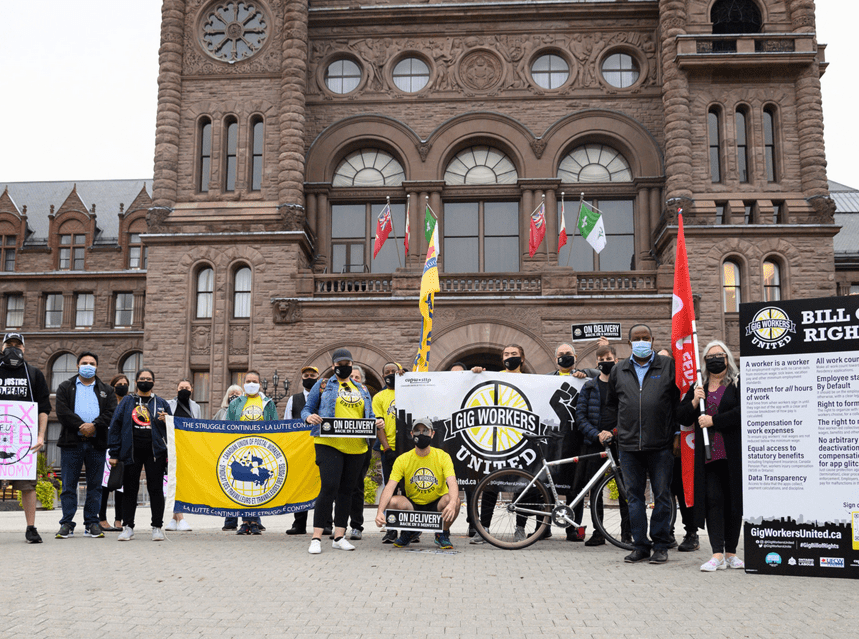 TORONTO, Oct. 8, 2021 /CNW/ – On October 7, the World Day for Decent Work, app-based delivery workers took to the streets – their workplace – to demand that Ontario #MakeGigWorkDecentWork.

While Gig Workers United was rallying at Queen’s Park to promote the Gig Workers’ Bill of Rights — a joint initiative with the Ontario Federation of Labour — at least two banner drops, one on the freeway and one on Kensington Market rooftop, carried the message “Gig work is real work. Make it decent work.”

Over the summer, the Ontario Workforce Recovery Advisory Committee (OWRAC) reviewed changes in technology, the definition of a workplace, and other global trends that are shaping the future of work. Their recommendations will directly affect the future of gig work in the province, but the gig economy’s workers were not among those leading the inquiry.

“With OWRAC – a committee without any representation from workers – preparing to release a report and recommendations on the future of our work, we needed to take to the streets to make sure the workers’ collective voice is heard,” says Jennifer Scott, President, Gig Workers United. “All workers, not just gig workers, need to be concerned about employment standards and we need a public discussion around this.”

“The Ontario Federation of Labour advocates for the rights of all workers. While workers experience growing precarity in this province, huge employers are exploiting this precarity to build the wealth of a small number of employers and investors. This is unacceptable,” said Patty Coates, Ontario Federation of Labour President. “The Ford government has proven that they will not protect Ontario’s workers from exploitation. The OFL will support every effort of gig workers to organize and be heard.”

“All workers, across the country, not just in Ontario, need to be concerned about the gig-ification of more and more jobs,” says Jan Simpson, President, Canadian Union of Postal Workers. “Workers in standard employment relationships, ask yourself: if gig work is cheapened and relegated to a subclass of workers, how long will it take your employer to see the advantage of employing gig workers instead of regular employees? CUPW is determined to resist that slippery slope and supports the struggle for fair and equal work.”

The Ontario Workforce Recovery Advisory Committee has yet to release its report and recommendations nor has it provided a date for the release.