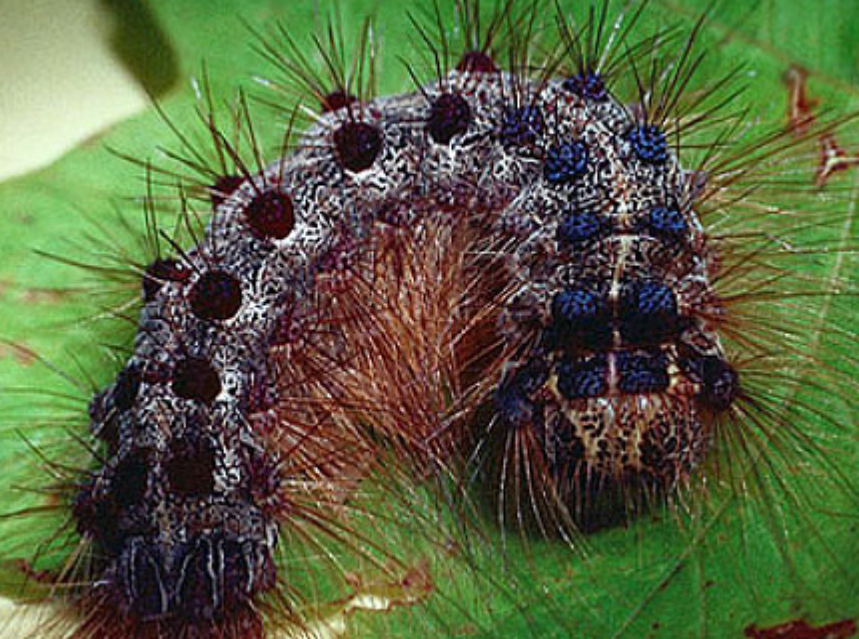 TORONTO, ON., May 20, 2020 — Yesterday, the City of Toronto announced that starting the week of May 25th they will once again be spraying high risk areas to prevent severe tree loss due to the invasive Gypsy Moth caterpillars. The aerial spray program is slated to begin in Ward 2 of Etobicoke Centre, particularly in the Princess-Rosethorn Block north of Princess Margaret Drive.

The European Gypsy Moth is an invasive insect whose caterpillars feed primarily on the leaves of oak and other trees species. The severe leaf loss created by these insects can make trees weak and susceptible to diseases and weather fluctuations. Untreated, those pressures can result in the loss of public and private trees.

During the aerial spray, one twin-engine helicopter with an ultra-low-volume spray system will fly about 15 to 30 metres above the tree canopy to apply a biological insecticide (described in detail below). The product must be applied directly to tree foliage, as Gypsy Moth caterpillars must feed on the treated leaves for the insecticide to be effective.

The City has been controlling gypsy moth caterpillar populations by using integrated pest management measures including tree banding and injections as well as egg scraping and will continue to do so this year in other areas of Toronto. However, those methods alone will not effectively control or reduce the population in the identified high-risk area.

An area of high-risk in Ward 2 – Etobicoke Centre has been identified for aerial spray as it contains a dense, mature and large canopied oak tree community. The first round of aerial spraying will take place on May 26 between 5:30 and 7:30 a.m., weather permitting. Should weather conditions be less than optimal, the City will reschedule the initial aerial spray. A second round will be applied within days, but specific dates have yet to be determined. A map of the designated spray areas is available at: cot-pfr2.maps.arcgis.com/apps/PublicInformation/index.html?appid=6edaae72c3744a6db8aea6625e3c8718.

Spraying is weather dependent and will only be initiated in the right conditions. As a result, specific spray dates are chosen 48 hours in advance and can be cancelled if weather conditions change. Residents within the affected spray zones are encouraged to check for and subscribe to updates on the City’s website at toronto.ca/gypsymoth or call 311.

The City has controlled gypsy moth caterpillar populations by using integrated pest management measures including tree banding and injections as well as egg scraping and will continue to do so this year in other areas of Toronto. However, those methods alone will not effectively control or reduce the population in the identified high-risk area.

The health and safety of Torontonians and the health of Toronto’s environment, including the tree canopy, are key priorities for the City. No special precautions are required for residents in the spray zone. If people wish to avoid exposure, they can remain indoors during and immediately after the spraying. The City of Toronto used Foray 48B during its 2019 aerial spray program. The pesticide does not affect adult moths, butterflies, bees, fish, birds or mammals. This is a biological control made from a naturally occurring bacterium found on dead or decaying matter in the soil that poses minimal risk to human health and is approved by Health Canada for urban aerial use.

Technical description of the product to be sprayed:

The insecticide the City is using is called Foray 48B Biological Insecticide Aqueous Suspension, of which Bacillus thuringiensis subspecies kurstaki is the active ingredient (identified under Pest Control Products Act Registration Number: 24977 class 11).