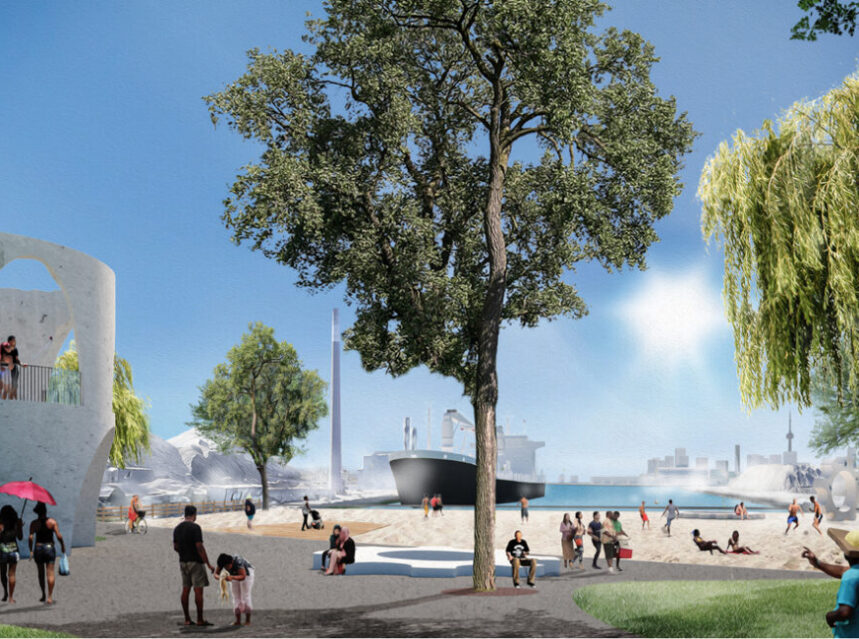 TORONTO, ON., January 27, 2021 — CreateTO and the City of Toronto have just announced that Claude Cormier + Associés (CC+A) has been awarded the contract to design and construct Leslie Slip Lookout Park, an exciting City-building initiative located in Toronto’s Port Lands.

Selected through a design competition, CC+A has designed some of Toronto’s most memorable public spaces including Berczy Park and Sugar Beach. CC+A’s experience and knowledge in place-making will transform the former Port Lands industrial site into a 1.9-acre public park that will feature a 360-degree viewing platform overlooking the skyline and entire length of the Ship Channel.

“The creation of Leslie Slip Lookout Park on Toronto’s eastern waterfront is something that residents and tourists from across the city and beyond will be able to enjoy for years to come,” said Mayor John Tory. “This new destination will offer year-round programs including pop-up events, concerts and public art, and will give people the opportunity to enjoy time outdoors while exploring an area of the city they might not have before.”

“The Port Lands of Torontohold a rich history and landscape,” said Toronto-Danforth Councillor Paula Fletcher. “Revitalizing this underutilized land will bring this site back into public use, beautify the landscape and complement the natural heritage system of the Port Lands, creating a stronger connection between the city and the natural areas south of Unwin Avenue and Tommy Thompson Park.”

Conceptual designs of the park contemplate building on the natural and industrial heritage of the area,while honouring Indigenous place-making potential, linking Tommy Thompson Park to recent landscape improvements in the area.

“Leslie Slip Lookout Park embraces the look and feel of its industrial context, re-identifying the landscape of labour and work into one of play and recreation,” said Claude Cormier, Landscape Architect and Founding Partner, Claude Cormier + Associés. “The park will aim to deliver an unfamiliar vantage of being immersed in a landscape that is oversized, brutal, and surreal. The balance of open spaces proposed for Leslie Slip Lookout Park creates a place for all tastes in one of Toronto’s most curious landscapes.”

On behalf of the City, CreateTO is leading the project, working in close association with various City departments, including key support from Parks, Forestry and Recreation, City Planning Divisions, the Indigenous Affairs Office, and with overall support fromthe Waterfront Secretariat.

“Leslie Slip Lookout Park is a key example of the types of city-building initiatives CreateTO was established to realize,” said Vic Gupta, the agency’s Executive Vice-President Strategic Development. “Collaborating with a number of City partners to turn underutilized lands into a year-round multi-use destination is an exciting opportunity, and we’re looking forward to working with the community to realize design excellence.”Public consultations for the park design will begin in February 2021 with the commencement of site preparation and construction to follow in the spring.