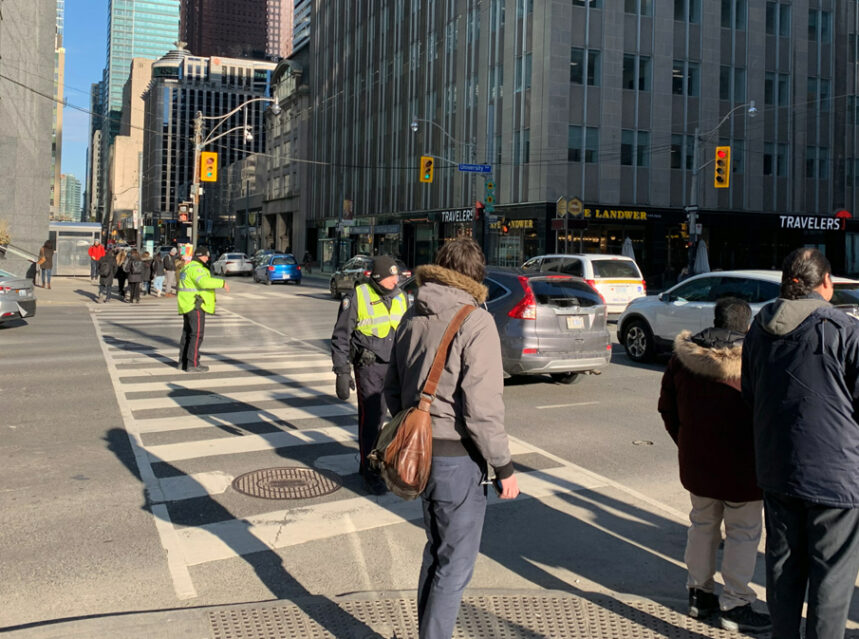 Today, the City of Toronto is officially launching the new Traffic Agents program which will help keep people moving through 11 of Toronto’s busiest intersections while also improving safety for pedestrians, cyclists, transit riders and drivers.

You may have seen glimpses of this with police presence while walking downtown over the past year, but now the City is rolling out the program at numerous intersections infamous for inefficient traffic flow, and safety concerns.

Mayor John Tory has championed the establishment of this program, successfully secured the necessary permissions from the province, and Toronto is now the first city in Ontario to deploy Traffic Agents on its streets.

“Traffic Agents will make a difference on our streets,” said Toronto Mayor John Tory. “These agents have been proven as an effective way to keep traffic moving by ensuring motorists, cyclists and pedestrians comply with the traffic signals; by helping reduce potential collisions; and by reducing the blocking of intersections. I look forward to seeing the new agents actively managing traffic at key locations in the city.”

In total, 16 full-time traffic agents have been hired and will be available to actively manage intersections during peak morning and afternoon rush hour periods.

There are 11 key intersections initially identified for traffic agents to manage. These locations have been prioritized by City staff using traffic data and trends:

Traffic agents will be placed where they are needed most based on evolving traffic demands and the need to improve safety and congestion. As the program evolves, and potentially expands, it’s expected that other locations across the city will be identified and included. One or two agents will be deployed to a single location depending on the size and complexity of an intersection.

Actively managing intersections is a proven and effective way to keep traffic moving by ensuring all road users comply with the traffic signals, helping to reduce potential collisions and reducing occurrences when vehicles are stopped in the intersection after the signal has changed which prevents on-coming traffic from travelling through (known as ‘blocking the box’).

The program comprises 16 full-time Traffic Agents, two supervisors and a program manager to manage and run the operations. The process for hiring full-time traffic agents was extensive including interviews, detailed police background checks, and comprehensive in-class and in-field training – and took several months to complete.

The City of Toronto Traffic Agents Program is a congestion management strategy that supports the actions in the proposed MoveTO plan as well as Toronto’s Vision Zero road safety plan. The plan also supports the Toronto Police Service’s Action Plan: The Way Forward.