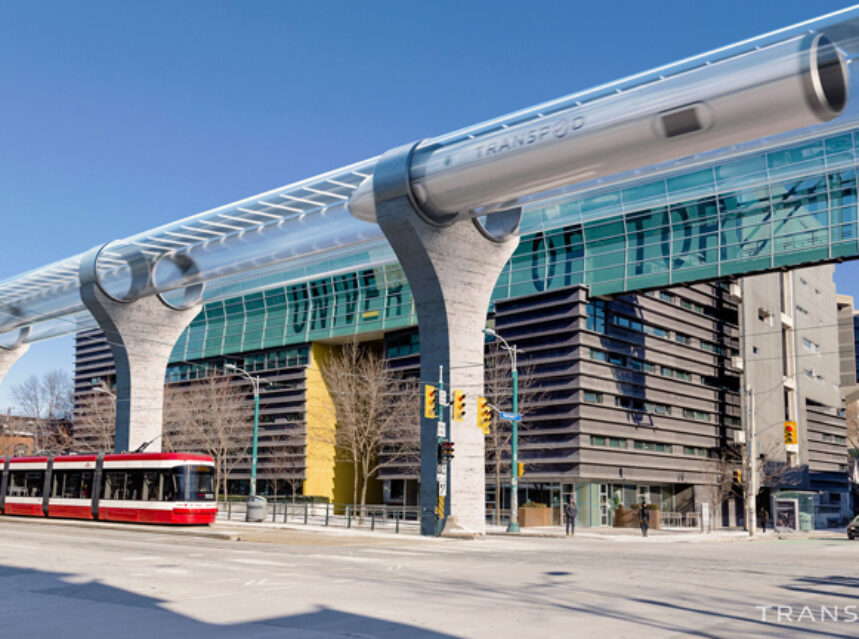 Toronto to Windsor in less than 30 minutes– no joke

TORONTO – January 6, 2020 – TransPod Hyperloop Inc., a Toronto company is designing a new fifth mode of transportation, beyond ships, trains, automobiles, and planes. And they are looking at routes in Ontario as an alternative for the province’s high-speed rail suggestion in 2017. The differences being it will go way faster and cost way less to build.

As envisioned by aerospace pioneer Robert Goddard, as well as SpaceX’s Elon Musk who introduced the term hyperloop, TransPod is evolving the original concept and they are constructing a 3 kilometre test track in Droux, France with plans to begin high-speed testing in 2020.

The company’s Canadian-made design for a next generation transportation system dramatically increases hyperloop stability and reduces the cost of line construction by employing a combination of electromagnetics, mechanical engineering, and signal processing design.

TransPod says it will provide an attractive choice for consumers and businesses in terms of speed, convenience, and price. It will also achieve significant government policy objectives: reducing highway congestion and maintenance, reducing carbon emissions, being full electric and fossil-fuel free, and increasing economic activity through rapid intercity commerce.

In May, 2017, the Government of Ontario announced its intention to move forward with a high-speed rail (HSR) project between the cities of Windsor and Toronto.

What is hyperloop as employed by TransPod?

The TransPod hyperloop system will serve ground-based mass transportation and will reach velocities faster than airline travel. It is based on low-pressure tubes carrying TransPod vehicles for reduced air resistance and less friction while being unaffected by weather conditions.

TransPod explains that a key advantage of hyperloop tube infrastructure vs. a railway track is that the former can be elevated above the ground on pylons, built in pre-fabricated sections that are erected in place, and joined with an orbital seam welder.

By building it on pylons, less land needs to be accessed as the pods can travel by following along or near highway alignments. TransPod suggests Highway 401 in Ontario or Highway 2 in Alberta, with only minor deviations when the highway makes sharp turns.

For TransPod’s Toronto to Windsor proposal their preliminary analysis concluded the requirements per kilometre will be 40 piers per km (1 every 25m), four pumping stations, two emergency exits ( 1 every 600 m) and one power substation to allow an electrical connection to the grid every 5 km.

It will be the fastest way to travel across land – The TransPod vehicle is designed for speeds exceeding 1000 km/h, with a maximum speed of 1200 km/h. Faster than a jet, and many times faster than high-speed rail (150-350 km/h), the experience of sitting on the TransPod vehicle will feel like accelerating smoothly on a jet runway, and then coasting at full speed inside the tube guideway. TransPod’s advanced control systems allow a smooth ride, where passengers can avoid the turbulence and storms experienced on jet airlines, since the tube environment provides shelter from outside weather. Instead of driving in a car for six hours between cities more than 500 km apart (such as Toronto to Montreal), a TransPod trip arrives in as little as 40 minutes, and from Toronto to Windsor it would take less than 30 minutes.

Convenient passenger transportation – Airline passengers already suffer while paying high ticket prices. Rather than planning a trip week in advance, being bumped from flights, experiencing turbulence, storms, flight cancellations, delays, diversions, and lost luggage, TransPod’s system offers a European-style high-frequency train experience, where passengers can simply show up at a station whenever it’s convenient, buy a ticket, and wait a few minutes for the next TransPod vehicle to depart.

Reduced greenhouse gas emissions – TransPod’s fully-electric system is designed to be linked to the regional electrical grid. Rather than burning fossil fuels on the vehicles, power from substations is delivered to the TransPod vehicles inside the tube infrastructure. This takes advantage of high efficiency power plants (and solar/wind as locally generated), rather than individual inefficient engines as in cars and airplanes.

Fossil-fuel free – TransPod’s system eliminates fuel waste of an airline jet ascending to altitude. Most of a jet’s fuel is burned at the start of a flight; hence the high airline ticket prices. TransPod vehicles will run nearly horizontally, thus avoiding this major inefficiency and operating cost of jets.

Weather factors – Inside the protected tube environment, TransPod vehicles are unaffected by weather conditions such as rain, snow, fog, turbulence, sand, and storms.

Cost Analysis – TransPod estimates the cost for the Toronto to Windsor route could cost approximately $10.3 Billion which comes in significantly less than the government’s $21 Billion high-speed train estimate according to CityTV News. and TransPod provides an analysis of the cost per kilometre here.

Please keep in mind these are only estimates based on their study, not real figures.

Over the next few years, TransPod says it will continue working with governments, partners, and investors to bring the TransPod system to life, and last January 2019 TransPod announced that it would be building a new three-kilometre-long test track in Haute-Vienne, as well as opening a subsidiary TransPod France, working with new industrial partners.

TransPod Inc. has offices in Canada, France, and Italy, and works with a global partner network of industrial leaders in the aeronautics, space, rail, and infrastructure industries. Collaborating with this expertise, TransPod is re-inventing tube transportation from the ground up.

For more information about the TransPod Line visit transpod.com

Toronto to Montreal Hyperloop Train in under 40 minutes

Canada is home to the largest Snow Maze in the world